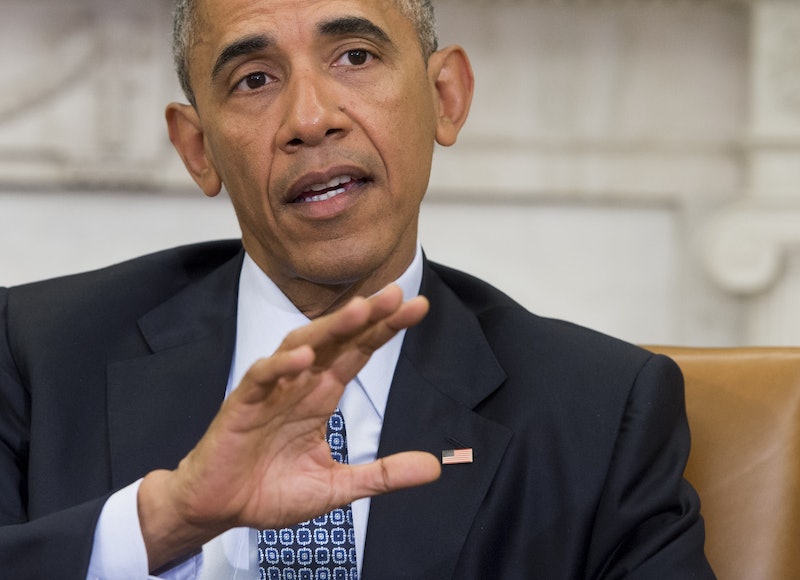 After months of anticipation, the Obama administration finally revealed the number of civilian drone casualties, the result of an internal investigation that examined the countries where the United States is not officially at war. Although the administration is making good on a promise for transparency, the timing — right before the Fourth of July weekend — seems a little strange.

According to the official count, the civilian death toll is estimated between 64 and 116 citizens since 2009. Additionally, the government reported that 2,372 to 2,581 combatants had been killed over those 473 airstrikes in Pakistan, Yemen, Somalia, and Libya. The numbers of what the government considers combatants and civilians in what officials call "areas of active hostilities" — such as Afghanistan, Iraq and Syria — were not included in the report.

As Gawker notes, the estimates of civilian deaths in non-active war zones from independent groups are much higher than the government reports. In Pakistan alone, the Bureau of Investigative Journalism estimates that, at minimum, 256 civilians were killed in drone strikes in the same time period. At maximum, the organization estimates that 633 civilians were killed. And that's only in one of the four countries included in the government's report with already starkly different results.

But the vast differential between the two totals of civilian casualties isn't the only thing raising eyebrows about the report. Along with the report, President Barack Obama issued an executive order calling for increased protection for civilians in counterterrorism operations. Obama's order said, in part:

As a nation, we are steadfastly committed to complying with our obligations under the law of armed conflict, including those that address the protection of civilians, such as the fundamental principles of necessity, humanity, distinction, and proportionality.

That's certainly a great thing to aspire to, but the timing seems odd. Not only are this order and the report coming at the end of Obama's presidency, but specifically it comes at the beginning of a holiday weekend as people are preoccupied with hot dogs and fireworks.

It wouldn't seem so bizarre if this report hadn't been so long in the making. Drone strikes are a hallmark of Obama's presidency — both good and bad. Although it keeps American boots off of the ground, drone strikes raise the issue of unintentional civilian casualties. That has long been a concern, so for people who have been waiting to see how drone strikes could have unintended consequences, this is an important report. So seemingly burying it in the news cycle at the end of a week seems like a bizarre choice.