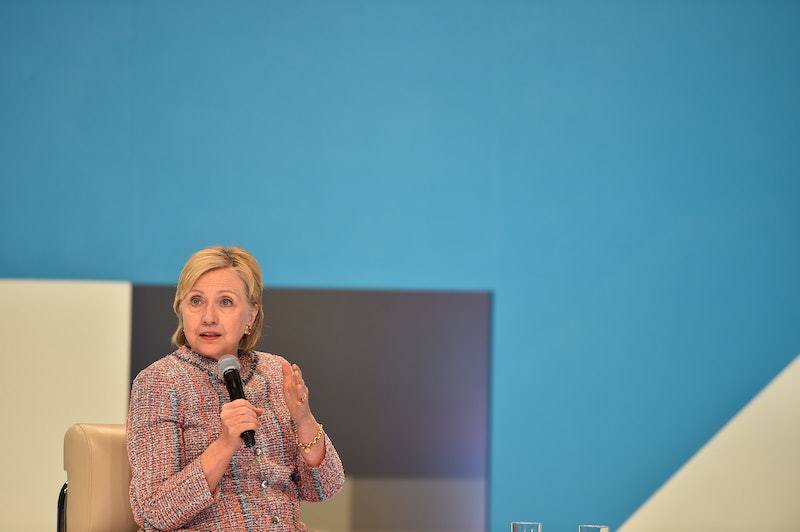 On Saturday, Hillary Clinton had a voluntary interview with the FBI about her private email server during her time as secretary of state. According to an aide, the interview took place at the FBI headquarters in Washington, D.C. and lasted for three-and-a-half hours. At this point, it's unclear if the voluntary meeting could help or hurt Clinton's campaign.

Clinton spokesperson Nick Merrill released a statement after the meeting:

Secretary Clinton gave a voluntary interview this morning about her email arrangements while she was secretary. She is pleased to have had the opportunity to assist the Department of Justice in bringing this review to a conclusion. Out of respect for the investigative process, she will not comment further on her interview.

The FBI and the Justice Department are trying to wrap up the investigation into Clinton's emails before July. From there, it will make recommendations ahead of the Democratic convention on whether charges should be filed against Clinton.

This meeting comes on the heels of a potentially damaging meet-up between Bill Clinton and Attorney General Loretta Lynch. The two apparently met privately earlier this week when they were both on the tarmac of the Sky Harbor International Airport in Phoenix. It doesn't appear that the meeting was planned, but there is some scuttlebutt about Lynch's ability to be impartial in the case against Hillary Clinton.

Clinton's campaign, of course, will continue to paint the voluntary meeting as evidence that Clinton has nothing to hide. A report issued by House Benghazi Committee Republicans on Tuesday could back this up: it revealed no new information in the case, and gave hope that the worst of the email scandal could be over.

But if Clinton wants to drive home the idea that she has already put everything on the table, a meeting — even if unintentional — between her husband and Lynch could put a sour taste in peoples' mouths. And all of this comes at a time when Clinton is finally able to focus almost exclusively on running a campaign against her Republican opponent, Donald Trump, rather than dueling simultaneously with both Bernie Sanders and the presumptive GOP nominee.

Although Clinton's viability in beating Trump seems more sure as we head into the general election, an indictment would certainly be a major setback in her efforts. For now, there's nothing to do but read the tea leaves, as it's unlikely that Clinton will comment on the interview before the investigation concludes.