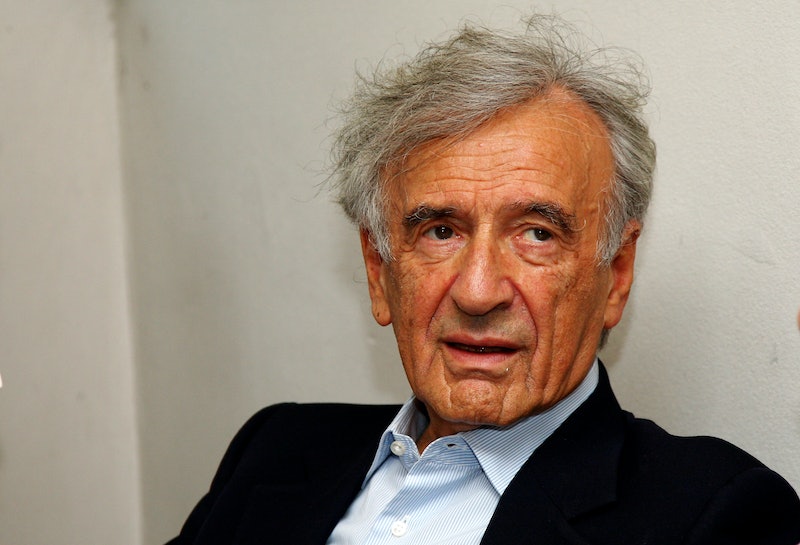 On Saturday, Holocaust survivor and award-winning author Elie Wiesel passed away at the age of 87, after devoting practically his entire life to preserving and reminding the world of the history of the Nazi genocide against the Jews. Wiesel was still a young teen in 1944, when he and his father were seized and shipped to the Auschwitz death camp, experiences he detailed in his engrossing and devastating 1960 memoir Night. His words and thoughts aren't limited just to the written page, however ― here are 5 Elie Wiesel quotes about life and death, and how he came to view his own survival of one of the worst atrocities in recorded human history.

Wiesel, who was liberated from Auschwitz shortly after his father's death at the camp, was nothing if not vocal and determined to speak out. He clearly regarded remembering and reminding the world of the millions of Jews killed in the Holocaust ― and the conditions that allowed their plight to go unnoticed ― as his life's mission. Whether discussing his own history, the moral and emotional obligations placed on him by his own survival, or some people's false claims of racial or religious superiority, odds are there's something Wiesel said throughout his life that will move or affect you. Here are five examples of his insights.

1. "I Must Do Something With My Life"

In 1981, Wiesel was interviewed by Michiko Kakutani for The New York Times, and he reflected on how his sense of life's purpose was crucially changed by his survival of the Holocaust.

If I survived, it must be for some reason: I must do something with my life. It is too serious to play games with anymore because in my place someone else could have been saved. And so I speak for that person.

2. "No Human Race Is Superior"

Wiesel made this staunch declaration against the idea of racial or religious superiority in an interview with Parade magazine back in 1992.

No human race is superior; no religious faith is inferior. All collective judgments are wrong. Only racists make them.

3. "What Is Abnormal Is That I Am Normal"

In an interview with Oprah Winfrey for O magazine in 2000, when asked what it takes to be "normal" again after enduring the horrors off the Holocaust, here's how Wiesel answered. It strikes a slightly personal tone, considering the simple pleasures of 'loving beautiful girls' or sipping on tea with toast aren't parts of his legacy that typically spring to mind.

What is abnormal is that I am normal. That I survived the Holocaust and went on to love beautiful girls, to talk, to write, to have toast and tea and live my life -- that is what is abnormal.

4. "One Who Has Emerged From The Kingdom Of Night"

Wiesel was incredibly gifted with language, as (quite frankly) any of the books, interviews, or quotations you'll see over the next several days and weeks will hammer home. And he was especially evocative in his acceptance speech for the 1986 Nobel Peace Prize, when he reflected on his journey through, as he called it, the "kingdom of night," and the impact such experiences have on the lives of those who endure them.

No one is as capable of gratitude as one who has emerged from the kingdom of night. We know that every moment is a moment of grace, every hour an offering; not to share them would mean to betray them. Our lives no longer belong to us alone; they belong to all those who need us desperately.

5. "Not To Sleep Well, While People Suffer"

In remarks he delivered at the annual William O. Douglas dinner in 2012, Wiesel argued against 'sleeping well' if people in the world, close to you or far away, are suffering and in need of support or rescue.

More like this
25 Quotes About Love To Share During Pride Month 2022
By Madeleine Aggeler and Emma Garza
Taylor Swift, Kerry Washington & More Speak Out On Uvalde Mass Shooting
By Jake Viswanath
Photos Of Boris Johnson Drinking At A Downing Street Lockdown Party Have Surfaced
By Bustle UK
Rebekah Vardy & Coleen Rooney’s Trial Has Officially Begun
By Bustle UK
Get Even More From Bustle — Sign Up For The Newsletter