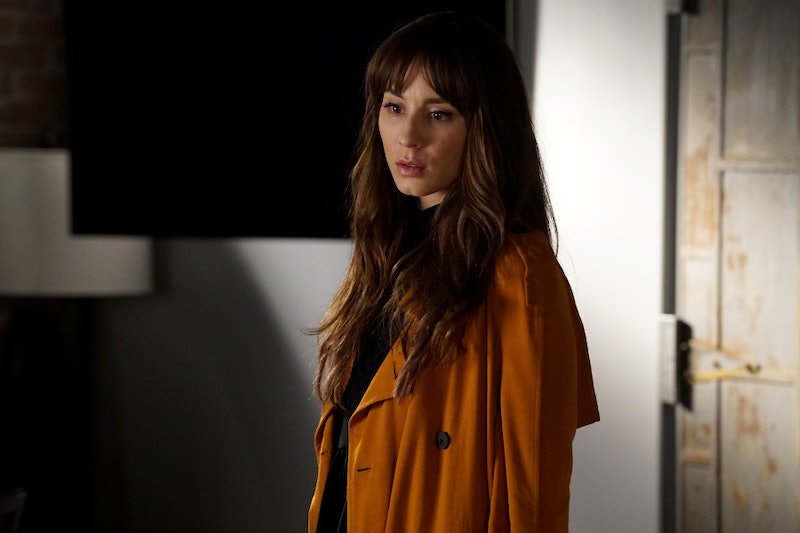 Of all the shocking reveals on Pretty Little Liars, the unmasking of Mary Drake as Jessica DiLaurentis' identical twin was the most jaw-dropping. And, it looks like she's in Rosewood to stay — Mary bought the Lost Woods Resort and has wasted no time cozying up to the Liars. In the Season 7 premiere, a strange conversation teased the possibility that Spencer has a twin on Pretty Little Liars. Mary commented that Melissa and Spencer used to look so alike that they could be twins, and Spencer responded that they used to be mistaken for twins when they were younger. Although nothing is out of the realm of possibility on this show, I highly doubt Melissa and Spencer are twins — but there are definitely some intriguing theories that indicate Spencer has either an identical or fraternal twin out there somewhere.

Yes, there has already been one major twin reveal — but it wouldn't be the first time time Pretty Little Liars has reused a plot device. (Remember when Ali and Mona both miraculously came back from the dead?) Plus, the DiLaurentis and Hastings families are inextricably linked and I'm not ruling out the possibility that Mary is Spencer's biological mother — so, if twins run in the family, thats increases the likelihood of Spencer having a secret sibling. Here are three theories that indicate Spencer has a twin:

1. It's Avery From Courtland

Plenty of Pretty Little Liars fans are frustrated by the Sara Harvey storyline (*raises my hand*), mainly because her character basically came out of nowhere and then was unmasked as Red Coat and Black Widow about five minutes later. But, although we didn't meet Sara until Season 6, Emily met up with her friend Claire in Season 4 and they discussed Avery. Reddit user northeastshorty makes interesting parallels between Avery and Spencer — like Spencer, Avery was the last person to see Sara before her disappearance. And, she implied that Avery and Sara had the most tense relationship in their friend group, adding that she'd been on intense medications to handle the fallout of Sara's disappearance. Again, Spencer was the only Liar who stood up to Ali and she ended up in Radley during Season 3 (while she still believed Ali was dead).

In this theory, Avery and Spencer are Mary's biological daughters. Avery Drake is A.D. and she resents Spencer's life of privilege and the fact that she was able to make peace with Ali upon her return to Rosewood. (Other than Sara's brief visit to Courtland in the Season 6A finale, she clearly hasn't rekindled her relationships with her former friends.) The same user also makes the observation that in the same episode, Peter Hastings' desire to shut down Radley was heavily emphasized — and we all know how far the Hastings will go to protect their family secrets.

In the beginning of Season 6, Spencer had an extended dream sequence that took place in an abandoned Radley. The only two people in the scene were she and a character credited as "Creepy Dancer" (played by Dance Moms star Maddie Ziegler). At the time, I thought it was a clue that Spencer had spent time at Radley as a child — Spencer and "Creepy Dancer" definitely resemble one another. But, what if Spencer subconsciously remembers that she has a twin and her dream was trying to tell her that another sibling is out there? And, if her twin was in Radley as a child, that would be a reason for the Hastings to hide or disown the child due to their concern with appearances. Again, Peter Hastings' interest in closing down Radley is highly suspicious.

Reddit user eaa513 has a theory that the Hastings used Mary as a surrogate, since at the time the two families were friends, and that she gave birth to Spencer and her twin. During Spencer and Mary's strange conversation, Mary said the two families have a lot in common — perhaps this was an indication that the Hastings put a child at Radley just like the DiLaurentis clan did to Mary.

If that's the case, Bethany Young could be Spencer's fraternal twin and perhaps Mary sought her out and raised her after Charlotte was taken from her. Although we've gotten a whole lot of hints that Bethany is important to the show's overall mystery, there have been approximately zero answers as to how exactly she fits into the puzzle. Making Bethany Spencer's twin would be a pretty satisfying twist.

As Mary Drake told Hanna, sometimes secrets are people — and I wouldn't be surprised if that's the case for the Hastings family.