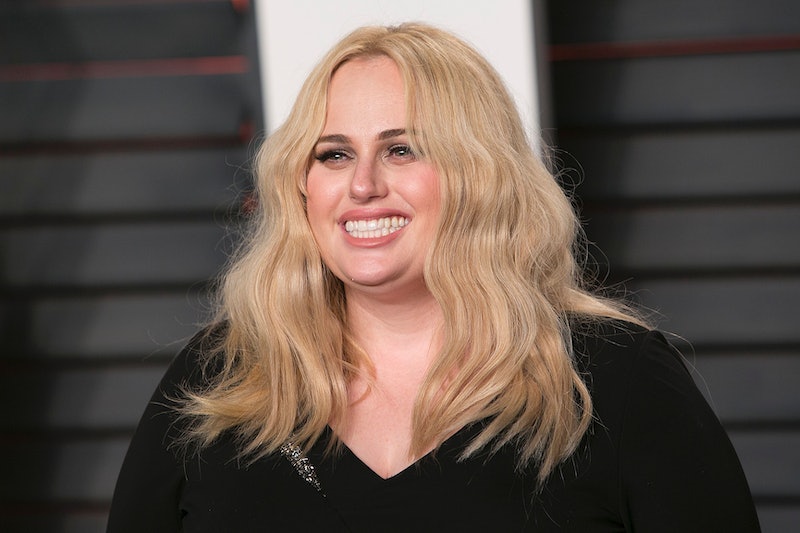 Aussie actor Rebel Wilson first broke out with a hilarious role in the 2011 comedy Bridesmaids, continued to crush it as the self-proclaimed Fat Amy in the 2012 hit film Pitch Perfect, and has been making audiences laugh ever since. But how much did the adjective in front of Amy's name matter in casting? In a recent interview with The Telegraph, Wilson revealed that she gained weight to land comedic roles in the past, considering her larger size a strength. She told the UK publication that she realized weighing more equaled getting more laughs when she cast her first play, The Westie Monologues, in 2002.

According to The Sydney Morning Herald, Wilson based the play on people she knew during her childhood growing up in the Sydney suburbs. But even though she was the writer and star, someone else got the laughs. "And I was like: ‘Oh. That girl’s getting a lot of laughs, a lot easier than me,'" Wilson told The Telegraph. "And I remember distinctly thinking: ‘I think it’s because she’s fatter.' And then, I don’t know if it was mega-conscious, but I thought: ‘How can I get more laughs? Maybe if I was a bit fatter…’ And then suddenly I was fatter, and doing comedy."

Wilson also revealed in the interview that she has a hormonal imbalance that makes her gain and lose weight easily, and so she occasionally slims down between roles. “Oh yeah! I’ll take six months off, and just do a total transformation," she told The Telegraph. "But then, so many people go: ‘Don’t you do it!’ But I think: ‘Why not?’”

It's Wilson's body, and it's disappointing to hear that she has felt the need to change her weight in order to land roles. Audiences hear and read too often about how female actors have their weight scrutinized and are told to lose weight in order to get parts. Oscar winner Kate Winslet, for instance, has spoken about the criticism of her weight often over the course of her decades-long career, most recently addressing this at the 2016 BAFTAs, after winning her Best Supporting Actress Award for Steve Jobs. "When I was 14, I was told by a drama teacher that I might do OK if I was happy to settle for the fat girl parts," she told the press, according to The Guardian (video below). She added, "Look at me now, look at me now."

So Wilson talking about gaining weight in order to win roles is a frustrating, but fascinating look at the other side of the Hollywood casting couch. The Bridesmaids star isn't the only actor to mention that comedic roles can require some more pounds. Since being cast in Bridget Jones' Diary and its sequels, Oscar winner Renee Zellweger faced a media frenzy over her 20-pound weight gain for the original 2001 film. "Bridget is a perfectly normal weight and I've never understood why it matters so much," Zellweger told Vogue in the June 2016 issue. "No male actor would get such scrutiny if he did the same thing for a role."

And in 2015, the now-buff Chris Pratt told GQ that he purposely gained weight while playing the lovable Andy Dwyer on the NBC sitcom Parks and Recreation for laughs — the audience's and his own. But the actor never seemed to attract criticism for his heavier physique and, according to the interview, Parks' showrunner even encouraged Pratt to pack on more pounds.

"I saw myself and I thought, ’Wow, I’m getting fat.’ And then immediately I was like, ’This is the funniest...’ I was making myself laugh," Pratt told the magazine. "I also understood that there was value to it — my comedic nature understood the irony of a super-happy fat sweaty guy who is completely confident and accepting of who he was. That’s fascinating to people."

While actors gaining or losing weight may sound trivial, it's important to remember that these stars are human, and it's sad that any of them feel the need to change their weight based on Hollywood's expectations. There are downsides to the body changes, both emotional and physical; Pratt, for instance, told GQ that even though he felt he was "funnier" when he was fat, he also had health issues: "My bones ached, I had cardiovascular issues, I was unhealthy, I was feeling rotten."

As for Zellweger, she told the Daily Mail that the extra pounds put her body through a lot. "For two days it's bliss and then you're full, OK? And you can then indulge all your fantasies about over-eating," she said. "Then after a week your glucose levels are going crazy. You're up and down and all over the place. It doesn't feel good, and no one wants to hear that, but it's the truth."

Gaining and losing weight for roles is clearly damaging for all, but it also brings up an important double standard. While Pratt seemed to receive a thumbs up for being the "fat funny guy," Zellweger and Winslet, for instance, have been criticized for years about their weight fluctuations, whether their gain was for a role or not. It's frustrating that when women alter their bodies for a part, it comes with so much negative attention. Actors, and women in general, seem to have to fit into two categories: "Fat" or "skinny" and no in-between. It makes me disappointed to hear that Wilson, someone who is naturally funny and talented, too felt she had to fit into either of those categories and felt the need to completely change a major part of herself in order to get work and be appreciated in the industry.

Here's hoping that one day Hollywood will accept Wilson and all actors for the body types they actually are.