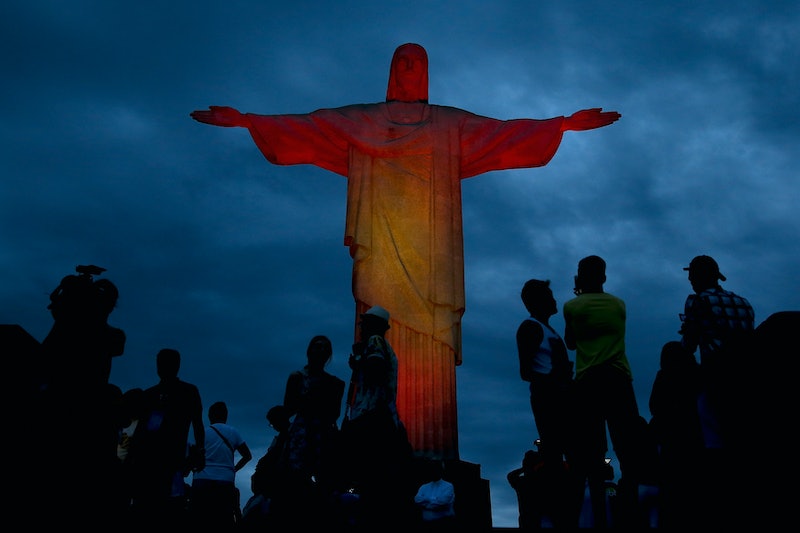 Many believers want you to think there's real evidence that God exists. The rise of so-called "new Atheism" in recent years has brought on a determined backlash from various religious speakers and intellectuals. Increasingly, the faithful try to support the existence of God with "evidence" — whether that means a good vibe while praying, or a face revealed in some burnt toast.

As an Atheist myself, I'd rather win someone over by logical discussion than by an appeal to a higher authority. (That's kinda the whole idea of being an atheist, after all!) Here are five supposed evidences of God's existance, and how to argue against them if you just don't buy it.

SUPPOSED EVIDENCE OF GOD #1: The Universe Has a Beginning, So Somebody Must Have Started i It

The Big Bang theory presents beleivers with a familiar problem — science is chipping away at the unknowns which bred faith in the first place. Theists can either deny it's happening, or try desperately to appropriate new discoveries to their worldview.

Young-earth creationist Christians take the first route: God is real, the Bible is His word, and any contradictions are, to quote GOP Rep. Paul Broun, "lies straight from the pit of Hell."

If the universe has a moment of origin, so the thinking goes, it requires an intelligent, triggering entity. This is essentially the "God of the gaps" argument, clinging to things science can't yet explain (but someday might) as though their mere uncertainty were faith's positive evidence. It's just an assertion trumped up as though it were fact, based only on the very gaps in understanding that science is still working to fill in.

SUPPOSED EVIDENCE OF GOD #2: The Universe's 'Fine-Tuning' is Too Precise to Have Happened By Accident

The universe is profoundly mysterious. Does it all seem massively improbable? Sure — unless there's some underlying reality we haven't yet deduced that makes it all click into place. Which could be the case.

There's no telling how precisely we might someday unlock the mysteries of physics and the universe. If that happens, this alleged "evidence" would crumble away just like the rest, seeing as it's dependent entirely on the Atheist's gaps in knowledge, not any actual affirmative knowledge from the believer.

Merely pointing to improbabilities or unknowns doesn't constitute evidence of God. You know what would? A disco dance party with God and a bevy of angels in the middle of Times Square. Which, if he, she or it felt so inclined, could be easily arranged.

SUPPOSED EVIDENCE OF GOD #3: The Complexity of Evolution Is Proof of an Intelligent Designer

The central claim here is that genetic complexity and mutation is simply too chaotic and improbable to have produced us without God's involvement. In reality, evolution is a slow, grinding selection of advantageous traits over millions and millions of years, and nothing about it — from genetic complexity on down — resembles actual evidence for God.

Actually, when you think about it, genetics complicates belief in a loving creator, doesn't it? If God wanted to tinker first-hand with our genetic legacies, after all, he could have done us a solid and left out things like cystic fibrosis.

If you're an Atheist, or a sensible believer who fancies a chuckle every now and then, evangelist minister Ray Comfort has a doozy for you. Get this: the banana is the Atheist's worst nightmare: It's nutritious, filling, the peel color tells you if it's ripe, and it has a stem for intuitive, graceful peeling. The ridges of the peel even fit into the crooks of your clasped palm! (That's what she said.)

SUPPOSED EVIDENCE OF GOD #5: My Statue/Food/Stain Is Proof of Divine Significance

As hard as it may be to confront, an oil-leaking statue is not evidence for God. Neither is some burnt toast, however much the char may resemble a certain goatee'd savior.

People can be very susceptible to this sort of thing. Even Professor Francis Collins, who headed the Human Genome Project, famously succumbed to this kind of thinking. Upon seeing a majestic frozen waterfall while on a mountain hike, he became so overwhelmed that he dropped to his knees and accepted Christ the very next day. How one gets from frozen water to Lord and Savior is anyone's guess, but this much is sure: you're welcome to your faith, but it has nothing to do with evidence.