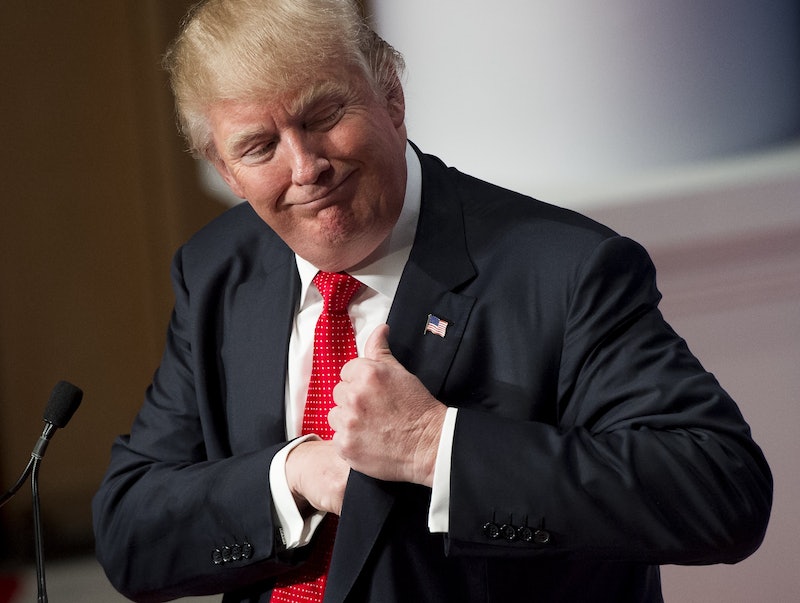 This weekend should have been a lay-up for presumptive Republican presidential nominee Donald Trump. Presumptive Democratic nominee Hillary Clinton was interviewed by the FBI for an investigation into the infamous private email server she used during her time as Secretary of State. (On Tuesday, FBI director James Comey recommended that no charges be filed against Clinton, but noted that she and her staff had been "extremely careless.") This is a topic Trump has used as cannon fodder over the last few weeks, especially in light of Bill Clinton's trip aboard Attorney General Loretta Lynch's private airplane. Lynch denied that they discussed Emailgate, but admitted, "I certainly wouldn't do it again." In short, this weekend was all set to be perfect storm of bad press for Clinton.

If ever there were a time when the Trump campaign could have taken the weekend off to relax, sit back, and watch Clinton fry, this was it. But The Donald just couldn't leave well enough alone. So on Saturday, Trump tweeted an image of Clinton which featured a pile of cash, the text "History made" and "Most Corrupt Candidate Ever," and — wait for it — a six-pointed star. Cue the record scratch.

These false attacks by Hillary Clinton trying to link the Star of David with a basic star, often used by sheriffs who deal with criminals and criminal behavior, showing an inscription that says "Crooked Hillary is the most corrupt candidate ever" with anti-Semitism is ridiculous. Clinton, through her surrogates, is just trying to divert attention from the dishonest behavior of herself and her husband. The real questions are, why was Bill Clinton meeting secretly with the US Attorney General on her case and where are the 33,000 missing emails and all of the other information missing from her case — Why are there so many lies?

As many sites reported, the image in the deleted tweet appeared previously on a message board for white supremacists. Foot, meet mouth.

The social media graphic used this weekend was not created by the campaign nor was it sourced from an anti-Semitic site. It was lifted from an anti-Hillary Twitter user where countless images appear. The sheriff's badge — which is available under Microsoft's "shapes" — fit with the theme of corrupt Hillary and that is why I selected it. As the Social Media Director for the campaign, I would never offend anyone and therefore chose to remove the image.

Scavino also tweeted Tuesday morning, saying, "For the MSM to suggest that I am antisemite is AWFUL. I proudly celebrate holidays w/ my wife's amazing Jewish family for the past 16 years."

This is only the most recent instance of Trump creating his own bad press. Remember when he apparently pretended to be his own publicist in 1980s and 1990s? And then, when asked about it in May by The Washington Post, his response was reportedly to hang up? Remember when Trump celebrated Brexit in Scotland, which voted to stay in the European Union? Or when he proclaimed the falling of the British pound to be a good thing because more people would come to his golf course? Remember this tweet after the Orlando shooting last month?

Time and again, Trump has been given the opportunity to show leadership and sensitivity, and fumbled it. This weekend, he was given the chance to accept a gift and take a break. Instead, he proved once again that his worst enemy is himself and his Twitter account. And those who say "All news is good news" clearly never heard of Trump.