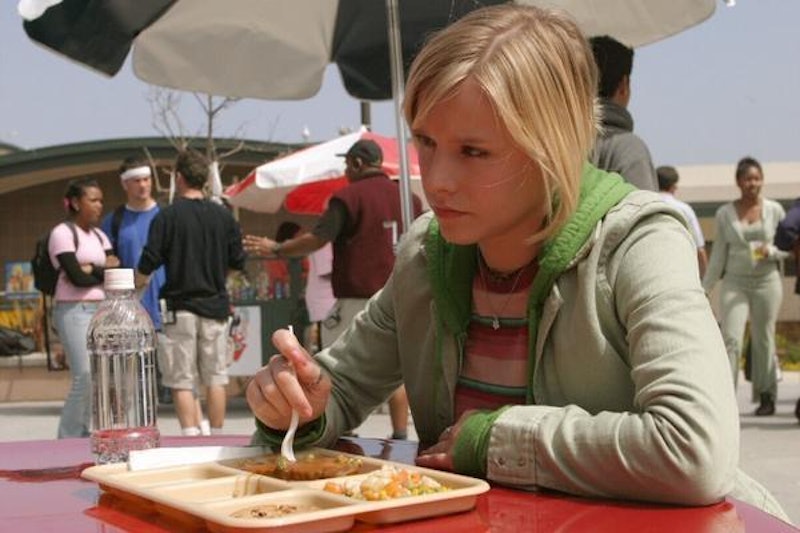 You know what, as hard as things get, at least you don’t have Veronica Mars problems. The 64-episode series about the teen super-sleuth didn’t spare any amount of heartache or hardship for its snarky protagonist, which was simultaneously tough and exhilarating to watch. There is one silver lining of watching all this hardship, of course (besides a love of this fantastic series). I have to say that there are plenty of Veronica Mars struggles that make you feel better about your own problems... you know, because having to send an uncomfortable work e-mail is a lot less stressful than trying to figure out the murder-of-the-week.

And I'm not even going to include everything that led up to the pilot. You know, getting unceremoniously dumped by Duncan; dealing with her friend being viciously murdered; falling out of favor with the ‘09ers; weathering the Shelly Pomeroy party incident; and all those things that made her life hell well before her Sweet Sixteen. I’ll even just ignore all the drama that came with the movie, because even as she tap-dances on 30 and tries to make a stable life for herself as a lawyer, Veronica can’t just get a break. Instead, I’ll condense the list to everything that happened in the series. Which is a lot.

See for yourself just how much Veronica’s day-to-day struggles blow yours out of the water.

1. That Time When The School's Obligatory Psychotic Jerk Pummeled Her Car With A Golf Club

2. That Time When She Realized Her Mom And Jake Kane Were Seeing Each Other In Private

And subsequently deduced that it probably wasn't to play checkers.

3. That Time When She Found Out Her Boyfriend Was A Steroid-Dealing Con Artist

It's not as bad as being ghosted, but having the first guy you date after your last big break up flee for Mexico is a bit of a bummer.

4. That Time Abel Koontz Told Her She Was Probably The Lovechild Of Her Mother And Jake Kane

It didn't turn out to be true, thank God, but in the moment she did not take it well.

5. Also The Time That Duncan Said That He Had To Break Up With Her Because They Were Half-Siblings

It turned out to be NOT TRUE, but I think this is one of those rare instances where she would've preferred hearing that she was just too clingy or she put up walls or something.

6. The Time When She Found Out Her Car-Bashing BF Provided The GHB That Led To Her Rape

But it was all swept under the rug in the end 'cause he was really, really sorry about it.

7. The Time She Figured Out That Logan's Dad Was Having An Affair With Lilly And Subsequently Murdered Her, And Then He Tried To Take Veronica Out So She Would Die With That Secret

I mean, at best the situation would've ended with a really awkward Thanksgiving dinner at the Echolls' family house.

8. The Time She Had To Break Logan Because He Was Systematically Wrecking The Town On A Reckless Rampage After Being Accused Of Murder And Then He Totes Didn't Take It Well And Broke A Lamp

And then her dad pinned him against a wall and it was a Whole Thing.

9. That Time Her Classmates Were Driven Into The Ocean In An Unfortunate Bus Incident And At First It Kept Connecting Back To Her But Really It Was More Of An Elaborate Plot Connected To A String Of Child Molestations

10. That Time She Learned Duncan Got Meg Manning Preggers

So like, they would probably had to break up, and they would also probably have to concoct an elaborate plot to have him leave the country with his newborn child. And when would she find time to study for the SATs?

11. The Time She Went To Profess Her Love To Logan But Found Out He Was Boinking The Smoking Hot But Totally Evil Kendall Casablancas

12. The Time She Find Out Beaver Raped Her At The Shelly Pomeroy Party And Gave Her Chlamydia... And Like, Also Killed A Bunch Of Their Classmates

Listen, anyone can get an STD, so let's just lump this all together and throw in "very nearly killed Veronica's dad after blowing up a plane and then committed suicide in front of her and Logan." Because all of that was a bummer.

13. The Time Aaron Echolls Got Off For Lilly's Murder And Veronica Lost Her Scholarship By Attending The Hearing And Missing A Test

Although Duncan made sure Aaron was taken out in the end, so like... little wins.

14. The Two Times She Was Drugged By The Hearst Rapist

The first time just ended with a chunk of missing hair, the second time resulted in a terrifying, woozy escape down the hallways while techno played. Both experiences were beyond unpleasant.

15. The Time She Found Out Logan Slept With Her Arch-Nemesis, Madison Sinclair

Which is unforgivable and atrocious, but now framed in the context of all the other stuff he puts her through actually just seems like another Tuesday.

16. That Time She Got Arrested During Class

She made the most of her jail time, tho.

17. That Time A Sex Tape Of Her Was Made And Mass Distributed Without Her Consent

And with Piz, no less.

Yeah, I think you can handle that scary meeting with your boss on Monday.