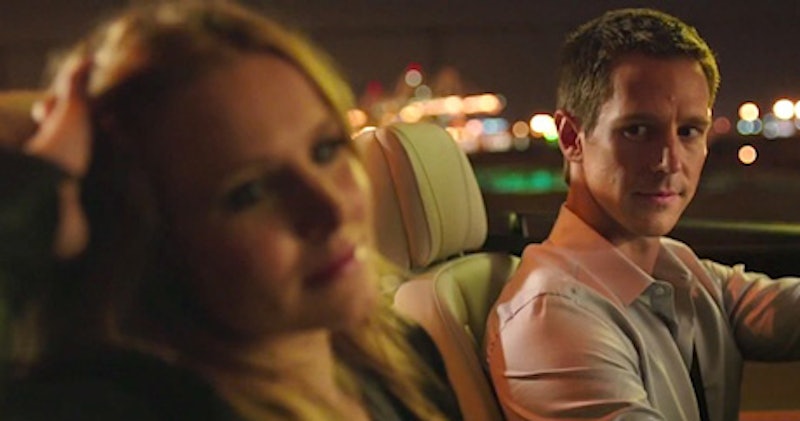 Make no mistake: Most Veronica Mars fans are tried and true believers in LoVe, Veronica and Logan shippers to the end. Theirs is a romance that blesses pop culture and was never, ever, dull, from the TV series through to the feature-length movie. However, nobody can deny that Logan and Veronica had a tumultuous relationship, one that often veered into dark waters. In real life, we probably couldn’t vouch for such intense pitfalls ... but in terms of entertainment, their drama was one of the reasons we tuned in. That's kind of what happens when you put two such passionate and morally ambiguous people in the same room, let alone in the same romance, you know?

So as we wait patiently for more Veronica Mars to come, let’s recount all the LoVe low points which broke our hearts but simultaneously kept us invested in their (wait for it) epic saga. Lord knows their relationship is a hard journey, but as Logan says himself, "They don't write songs about the ones that come easy." Or, you know, sizzling hot fanfiction.

And we’re not even going to include their pre-kiss moments, which included lots of reputation ruining and vehicular damage. Another time, another listicle. For now, brace yourself for Veronica and Logan’s darkest relationship moments, definitively ranked.

Nobody dies, nobody's heart is shattered, and to be fair, it's at a party Logan is throwing for Parker. It's a scene that isn't going to make any LoVe fan suffer, but it definitely induces a light wince.

11. When Veronica Finds Out Logan Has A Bodyguard Watching Her

It freaks her out and causes a big explosion between the two, make no mistake. You can see the rift forming between them coming to a head, and it all starts with this. Still, it's also totally endearing that Logan wants to protect Veronica (because he loves her, of course), so through another lens, this is a pretty great moment for the couple.

Logan developing ~real feelings~ for the blonde was definitely a blow to the sanctity of LoVe, but nobody saw these two as an endgame. This arc was dealt with quicker than you can say "Vermont boarding school."

9. When Logan Delivers His “Epic” Speech

As a standalone moment, this ranks as a high point for Veronica/Logan shippers, and I'm sure some could recite the whole damn monologue. But reread that speech, especially through the eyes of the then-skeptical and perpetually-hurt Veronica. "Lives ruined, bloodshed?" Jesus. This is a heavy, heavy speech, one that makes dramas with your high school boyfriend seem retrospectively minimal.

7. When Logan Started Beating Up Piz After Thinking He Released The Veronica/Piz Sex Tape

And now we're getting into the juicy stuff. Again, in a warped lens, this could seem like a triumphant LoVe moment. However, I would be pretty messed up if my ex just wailed on my current squeeze after he saw us boning on camera ... even if it was to defend my honor. Incidentally, Parker let Logan go after this, since he obviously still had his Veronica hangups (told you that relationship was nothing to worry about).

6. When Logan Breaks Up With Veronica Because Of Their Respective Issues

It's just sad. Sad, sad, sad. We all waited deep into Season 3 for their relationship to really take wing, and it unravels quickly due to Veronica's (understandable) lack of trust and Logan's desire to shield her.

5. When Veronica Walked In On A Post-Coital Logan And Kendall Casablancas

NOPE. NOPE, NOPE, NOPE. What hurts far more than the "epic" speech is the followup, the moment Veronica goes to reciprocate his feels, and not only does Logan not remember spouting such gooey sentiments, but he's banging her mortal enemy. I can't. This whole thing is very shortly resolved, however, so if nothing else, we could put that unpretty image behind us.

4. When Veronica Found Out That Logan Was Indirectly Responsible For Getting Her Roofied

God, those are coal-black waters we're treading, guys. All of it. At the same time, Veronica forgives him almost immediately after they have a whole heart-to-heart about it, so as dark as it is, the pair moves on from the revelation quickly.

3. When Veronica Broke Up With Logan Due To His Erratic Behavior

Low-key arson, et al. This maybe doesn't stick out in people's minds as much because we see it only as a flashback, but lest we forget, Logan knocks over a lamp. Like, Jesus Christ, dude.

2. When Veronica Learned Logan Hooked Up With Madison Sinclair

Veronica construes this as personal affront, and honestly, you can't blame her one bit.

1. When Veronica Thought Logan Killed Lilly And Subsequently Had Him Arrested

We all know how this ends: with the just as (if not more) dark revelation that his father is Lilly's murderer. But think about that split second when you thought Veronica's boyfriend killed her best friend, and how horrifying it is that it didn't even sound implausible, considering everything we knew about Logan thus far. Dark. Dark as the night itself.

Man, being a LoVe shipper is rough.