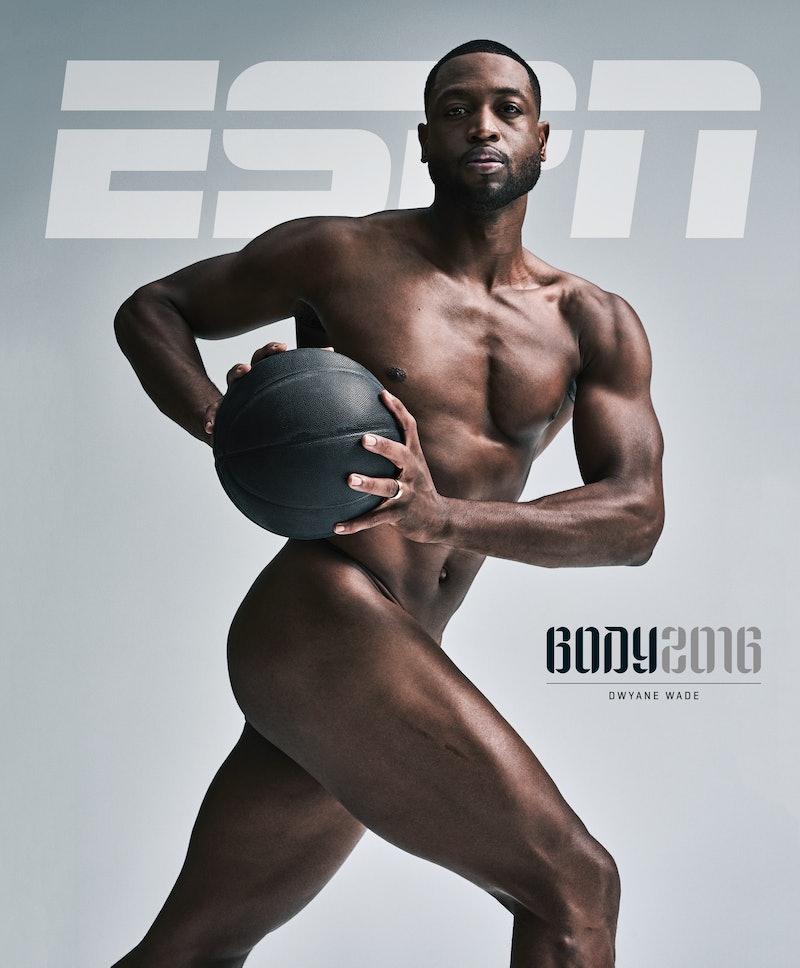 The media world is making slow progress on the road to body diversity, inching its way towards including different body types, representing a range of sizes, and easing back on Photoshopping. And that media includes the new 2016 ESPN Magazine Body Issue, which hits newsstands Friday, July 8. But the keyword here is "slow." While it's exciting to see brands such as Aerie and ModCloth leave stretch marks and dimples on their print ads and feature a wide variety of silhouettes, there are only a small amount of companies that seem truly dedicated to abolishing the dated body standards of yesteryear.

While ESPN's Body Issue definitely has a hand in promoting the idea that fit, powerful bodies come in all sorts of shapes and sizes to the public, it's not necessarily groundbreaking. Some might argue that change is a slow process that requires time, but my question to that would be, how much time do we need?

Comparing the first 2009 ESPN Body Issue with the 2016 publication shows that our acceptance towards diverse bodies might have grown a little stagnant. Although we can certainly applaud publications and brands for opening their platforms to include unique variations of body types, we can also ask them to go a little further. Below is a comparison between the first ESPN Body Issue and the 2016 one, proving just how far we've come in accepting body diversity, but also how far we have left to go.

According to ESPN, Reinertsen is the first female amputee to complete the Ironman, and as such was celebrated by the outlet for her strength and fierceness. When ESPN explained why they chose her, the publication quoted a story Reinertsen's mother shared: "At age 11 she ran her first race, a 60-meter against other amputees. In the middle of it, the strap holding up her prosthetic leg snapped, so she had to hold it in place while she ran ... No one would have blamed her for giving up at that point. But she kept going — and won."

By featuring Reinertsen, ESPN not only showed a strongly built woman (moving us away from the svelte, waifish beauty standards imposed on the female gender so frequently), but also highlighted the strength and power of amputees. It was a wonderful contribution towards body diversity.

Ulambayar is a powerful Sumo wrestler who shows the agility and grace of a big body. According to Andrew Freund, Director of the U.S. Sumo Open, "He can do splits like a ballerina, touching his nose flat to the ground. He can lift one leg in super slow motion, balance on the other leg, and freeze the position. Show me another 340-pounder who can do that."

By featuring Ulambayar, ESPN helped show that a large body can do anything that a traditionally fit one can, dispelling the notion that heavier-set physiques are always limited.

Carter is the current shot putter American record holder, and she was featured in the 2009 issue wearing shorts that showed off powerful, muscular thighs and a sports bra that let her flex her strong arm muscles and abs. Everything about her hinted at power. By featuring her, ESPN offered a different version of a female athlete: One who was built, curvy, and with iron-like muscles that were to be envied, not covered.

Out of the 21 athletes featured in the first Body Issue, only the above three significantly strayed away from the stereotypical athletic body type: Cut, fit, with a chiseled six-pack, and sinewy muscles.

And out of 11 women, only Carter and Reinertsen added a good dose of diversity; while out of 10 men, Ulambayar was the only one who wasn't ripped like a Michelangelo statue. Considering this was 2009, however, one might still applaud the magazine for opening its platform to underrepresented athletic body types, and for exposing the public to their strength and fierce abilities. So how have things improved by 2016?

Wilfork is the NFL nose tackle for the Houston Texans, and he is built like a tank. Weighing in at 325 pounds, Wilfork embraces his body type and uses it for its full potential. That's precisely the reason why he wanted to pose for this year's Body Issue — to dispel the notion that a powerful athlete can only come in a lean cut.

He told ESPN, " A lot of people look at me as a big person. Some people consider me to be obese. Some people consider me fat and sloppy. But I think this shoot will give people a different look at what I am. Everybody knows that I have a big stomach, but I think sometimes that overshadows everything else on my body — from my calves to my back to my shoulders to my biceps, you name it. What people go to the gym and work for, I have." That point alone makes him a worthy contribution to the Body Issue.

Seely is an elite paratriathlete, with a 2015 Paratriathlon World Championship under her belt. Just as in the 2009 Issue with Reinertsen, it's great to see ESPN's dedication to representing differently-abled athletes who achieve the same types of triumphs and feats as their able-bodied counterparts. This kind of representation proves that a differently-abled body can be just as fierce and strong as any other.

According to ESPN, Louganis is a 56-year-old American Olympic diver, LGBTQ rights activist who lives with HIV, and a two-time Olympic Games gold medalist proving that one's age doesn't have to slow down one's body.

As he cheekily told ESPN, "When I look around at my contemporaries, I'd say I'm probably in better shape than most of them [laughs]." While his body doesn't necessarily promote physical diversity, it does help bring to light a different angle to how we view maturing humans. Although many might want to dismiss folks over the age of 50 as "past their prime," Louganis proves just how close-minded that actually is.

He also shows how strong you can be while fighting a difficult disease. He shared with ESPN, "I try to live by example — being gay, being HIV-positive — you know, life goes on. HIV taught me that I'm a lot stronger than I ever believed I was." Despite illness, there is still strength.

Once again, out of 19 athletes, only three break away from the traditional athletic physique — with Wilfork being the only heavier-set body, Seely representing the only differently-abled physique, and Louganis — while still incredibly chiseled — portraying the older age bracket that society typically wants to perceive as retired and not as sharp.

Out of 10 men, only two represent a tangible amount of diversity, and out of nine women, only one sports a visibly different body type. When considering that this is the eighth consecutive Body Issue, one might argue that we actually haven't come that far in accepting body diversity. Sure, we might showcase a couple of different variations in physiques, but that doesn't equate to fulfilled diversity.

While the 2016 Body Issue did an amazing job finding powerful athletes who are inspirations in their fields, comparing it to the 2009 issue shows that we haven't come very far in terms of accepting representation. Every now and then, we applaud and spotlight different figures and highlight how they don't perform any differently than the "ideal type," but things aren't anywhere near being a 50/50 split.

But who knows? There's always room for improvement, and the 2017 Issue might hit closer to the mark.