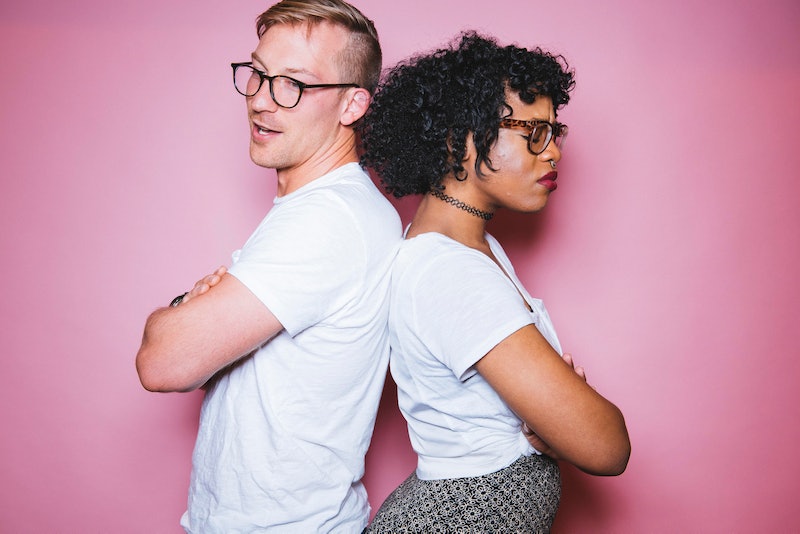 If you're in a toxic relationship yourself, you might not want to admit to it — and you might not even know that you're in one. We have an amazing ability to delude ourselves and disassociate from what is actually happening — to convince ourself that our relationship is great, despite warnings from friends and family and maybe even our own gut instinct.

"Couples have disagreements and even fight but a few things elevate a couple to toxic status," relationship coach and founder of Maze of Love, Chris Armstrong, tells Bustle. "One, they are more interested in winning or 'one-upping' each other than they are in finding compromise or focusing on what really matters. In a toxic relationship, everything matters and thus everything can become a formal bone of contention. This is really about two individual egos colliding all the time. Two, toxic couples do not respect each other... Third, toxic couples are an even, unhealthy mix of night and day, black and white, long and short. One minute they appear happy as can be but the next they hate each other." It's a hard, scary place to be in.

If you've been in a toxic relationship in the past, you probably were able to realize it after the fact. Maybe you or your partner were controlling, maybe you fought constantly, maybe you felt unloved and manipulated. These sorts of a relationship have a way of chipping away your self-esteem down to your bones and can make it really difficult to establish healthy habits in your next relationships. The best thing to do is to be able to nip them in the bud — identify the toxicity and get out as quickly as possible. And although there are lots of ways these relationships can manifest, they have some things in common, especially when it comes to the ways you communicate (or lack thereof) as a couple.

Here are habits that toxic couples share when it comes to communication, because waiting isn't the same as listening:

Toxic people rarely realize that they're toxic — that's what makes them so difficult to reason with when you're arguing. In a relationship where couples move the blame around without ever taking accountability, there's going to be a constantly hostile environment with no room for growth.

Being able to listen in a relationship is toward successful communication. It's important in an argument or disagreement, but also just in day-to-day living. If you and your partner are just waiting to talk about yourselves or voice your opinion, without actually listening to what your partner is saying, the relationship is in a lot of trouble. You need someone with someone who's going to be more open and emotionally available to you. "Oftentimes, when someone is attracted to an 'emotionally unavailable partner,' it is a good opportunity to engage in self-reflection," dating coach and founder of School of Love NYC Monica Parikh tells Bustle. "What qualities attracted you to this person?" You want to be with someone who is open, available, and communicative.

Whether it's outright belittling comments or just "jokes" that have too much of a sting to them, at least one person in a toxic relationship is probably getting kick out of bringing the other down. You've probably seen it — you're out with a couple, and one of them makes a comment or a joke that doesn't quite land right and then everyone gets super uncomfortable.

4. They Bring Each Other Down

Whether one person or both are responsible, toxic couples bring each other down when they're communicating. A relationship should make you a better version of yourself. But toxicity is exhausting and wearing, so toxic couples will do less and less and give up more and more.

Speak of stagnating, along with doing less and less, toxic couples end up isolating themselves and not communicating with friends and family when there's something wrong. Maybe one of you is controlling or both parties are needy, but as a couple, you'll end up sort of collapsing in on yourselves. It's dangerous— you need other people to help pull you out of the rut, but instead you may just become more insular. And toxic partners convince you that you could never get anyone else — combined with giving and taking away their affections to make you feel dependent and anxious. "In the world of dating, relationships and love, anxiety can be an all too common bedfellow," Armstrong, says. "And this is especially true when there's lack of self-confidence, lack of knowledge of what they other person wants or is thinking, and lack of control." In other words, toxicity leads to anxiety. Be careful.

6. They Hit Below The Belt

While you should always be open and honest in relationships, there should also be an underlying foundation of respect. But to a toxic person, nothing is off limits. They'll say anything — and do anything — to drag you down and keep you close. You know, on a gut instinct, when someone says something that is just not OK. Trust that instinct.

Bottom line? Toxic relationships cross boundaries. "The wrong relationship can decimate self-esteem and lead to a lifetime of heartache and struggle," Parikh says. "If you lack confidence and boundaries, you have a much higher propensity to be in a low-quality relationship. Plus, you may unconsciously repeat dysfunctional patterns learned in childhood."

Whether a person is controlling, isolating, manipulative — there are certain boundaries that are important to maintain a happy, healthy relationship. You should be able to have personal space, time with your friends and family, to feel safe within a relationship, and to be able to express your opinions. But in a toxic relationship, these aren't respected. You lose sight of what's meant to be your own — and you need to claim it back.