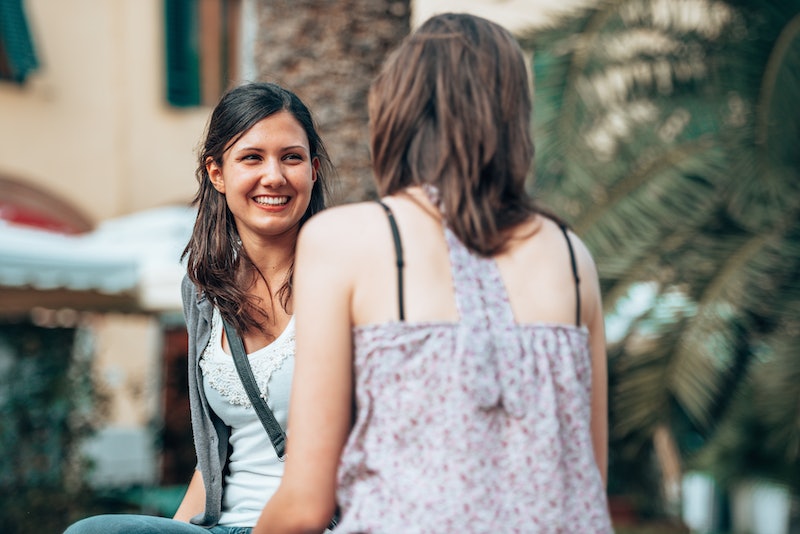 Nobody's perfect, and even the least toxic people in the world have probably exhibited toxic behavior at one point or another. I know I have. That said, there is a big difference between occasionally exhibiting toxic behavior and regularly adopting the habits that all toxic people have in common.

When toxic people treat others poorly, it's generally a reflection of they feel about themselves. As Joyce Marter, LCPC explains in her post for Psych Central, "It’s important to realize that toxic people are often unconsciously making you feel how they feel about themselves, in other words, it is more about them than it is about you." Even if you realize this, though, relationships (romantic or otherwise) with toxic people can be so stressful and confusing that your mental health ends up really suffering from them.

This is why it's so important to know how to spot a toxic person — so you can keep your distance from them. It may sound cold, but it's crucial to your overall well-being. Take it from someone who's been there: if you consistently excuse the habits of toxic people, then when you finally do distance yourself from them, your mental health and self-esteem are going to require a lot of repair.

Fortunately, spotting a toxic person is pretty easy if you know which habits to look out for.

Toxic people are bad listeners. Often, toxic people make a habit of talking more than they listen, but I've also known toxic people who would simply tell me to "shut up," or "stop talking" whenever I was trying to have a serious conversation with them about something that was bothering me. It's actually a very common habit of toxic people, and you should neither exhibit it yourself nor put up with it from others.

2. They're Sarcastic All The Time

If you're as big of a fan of Chandler Bing and Lorelei Gilmore as I am, then you're probably aware that a little sarcasm can be downright hilarious. That said, I'm sure you also know that sarcasm can easily turn excessive and hurtful, too. I think we've probably all been guilty of taking our sarcasm a little too far at one point or another. But for toxic people, hurtful, condescending sarcasm is a daily habit rooted in anger, distrust, cowardice, and a fear of expressing their own feelings. As Psychology Today put it in their post on stopping sarcasm:

Sarcasm is psychologically rooted in anger, distrust and cowardice. People using are angry or frustrated, don’t trust the other person (or themselves) to pull off speaking speak directly, and are often afraid to take the risk to express their true feelings.

What's worse is, in my experience, toxic people are so accustomed to communicating with hateful sarcasm that they fail to see just how much damage they're doing. In fact, every time I've called out a toxic person for being sarcastic toward me, they've responded in anger, and/or told me I was being "too sensitive." If this happens to you, know that you're not being too sensitive. Excessive, hurtful sarcasm is not a healthy way to communicate with a loved one. Period.

3. They Blame Their Problems & Feelings On Other People

Toxic people habitually refuse to take responsibility for their lives, their problems, and even their feelings. Instead, toxic people make a habit of blaming everything unpleasant about their lives — whether it's a failing relationship or a failed test — on others.

Toxic people behave this way because they're deeply wounded, and have yet to deal with those wounds. As Australian psychotherapist Jodie Gale explains for Psych Central, "They are not yet able to take responsibility for their wounding, their feelings, their needs and their subsequent problems in life."

Lying is just one more way toxic people can avoid taking responsibility for their own lives, so they do it chronically. Often, toxic people lie because they have poor self-image, but lying is also just a way to get what they want. Furthermore, if the toxic person in question is also suffering from an untreated personality disorder, lying may be a compulsion for them.

People who have made a habit out of lying are probably dealing with some deep insecurity. While it's understandable to want to empathize with someone who's suffering from insecurity on such a destructive level, it also means they obviously can't be trusted. And if you think the liars in your life are only lying to other people and not to you, think again.

5. They Love To Brag

First of all, there's a difference between celebrating your success and bragging. Being proud of yourself is a good thing, and being competitive can be a good thing, too. But needing to be "better off" than everyone else, and finding validation in outdoing your friends and family, is a toxic mindset for sure. Toxic people are always looking for opportunities to one-up other people — whether they do that by comparing how much better their job, relationship, or yoga skills are than someone else's, it's near-constant and it's not healthy. This need to brag comes from a deep-seated insecurity, and it's not healthy behavior to exhibit or to be exposed to.

6. They Put Other People Down

Thanks to that deep-seated insecurity, fear of expressing their feelings, and unchecked anger we were talking about earlier, toxic people make a habit of putting other people down.

Again, this circles back to the fact that toxic people tend to have extremely low self-esteem. As Maria Bogdanos wrote for Psych Central, this need toxic people have to put others down is also, most likely, born from their own childhood wounds that they have yet to deal with. Sometimes this results in name calling, other times it's bragging or hurtful sarcasm. However it happens, though, this habitual condescension is really messed up, and in my experience, toxic people will try to play it off as humorous. It's not funny, though; it's actually a sign of emotional abuse. Don't put up with it — and don't engage in this type of behavior, either.

I think we've all procrastinated at one point or another, but toxic people often make an art of it. This comes right back to the fact that toxic people don't take responsibility for their own lives, and may not even set goals for themselves in the first place.

Other times, toxic people might not procrastinate when it comes to their needs or goals, but they'll put off paying you back for as long as you'll allow.

8. They Love To Talk About People Behind Their Backs

Toxic people can't get enough of gossip. And I mean the back-stabbing, lying, slandering kind of gossip that wrecks reputations and/or is just really mean. Toxic people will even make a habit of speaking this way about the people they spend the most time with and claim to love. If you have a friend or a partner who talks like this about your mutual friends behind their back, know that they're probably gossiping about you when you're not around, too.

Toxic people make a game of discovering your emotional weaknesses, and then exploiting those weaknesses so they can use you. Toxic people become chronic manipulators for lots of complex reasons, so don't think you can "fix" them. Conversely, if you feel the need to control and manipulate those around you, consider speaking with a mental health professional about it. Otherwise, the people you care the most about are going to suffer for it.

More like this
The 3 Most Compatible Matches For Life Path 1s
By Kristine Fellizar
I'm Going Off My Bipolar Meds to Try to Get Pregnant
By Anonymous, as told to Anna Goldfarb
Camila Cabello Shared Advice For Anxiety & Mental Health With Selena Gomez
By Alyssa Lapid
I Feel More Like Me With My Meds, Not Without
By Anonymous, as told to Anna Goldfarb
Get Even More From Bustle — Sign Up For The Newsletter