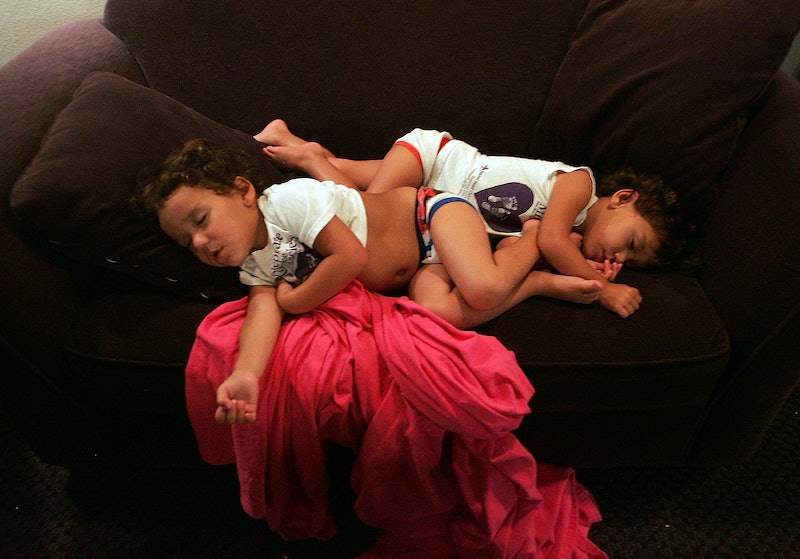 Having trouble sleeping? There’s an app for that. Actually, there are a whole bunch of apps for that. In honor of Sleep Awareness Week, we’ve done a little research and assembled a collection of the top sleeping apps . We even tried a few of them (read: the free ones) out, so that we can give you the lowdown on exactly how they work. Whether you’re a sleep talker who wants to find out what sorts of things you mumble at night, or simply need a little help relaxing, these seven apps are here to help you digitally count sheep.

Do you talk in your sleep? You can keep track of what you’re saying and how often you’re saying it with Dream Talk Recorder, available for iPhone and Android. Both the free and pro versions allow you to keep a complete history of your recordings with stop/times, feature configurable activation delays and recording stops, and even allow you to share your favorite dream talks via email, Facebook, Twitter, and other Dream Talk Recorder users. The ad-free “Pro” version, which’ll set you back $1.99, also gives you unlimited recording hours and Dropbox integration.

Although my boyfriend recently informed me that I do occasionally mumble in my sleep (news to me), I didn’t manage to catch any stray words in the two hours the free version lets you record per night. The app did, however, record a few seconds every time I shifted position in my sleep, and once it caught my gulping from the water bottle I keep by the side of the bed. Luckily, the app distills your recordings down into snippets, so you don’t have to listen to two entire hours of sound just to see whether you legitimately said something hilarious in the middle of the night.

If you’ve ever felt sluggish after waking up to your alarm in the morning, it’s probably because you got jolted out of one of the deeper phases of sleep. SleepBot helps combat that problem through its intelligent alarm. When set on the edge of your bed, it can track your movements as you sleep, determining which phase you’re in at any given time. When its alarm wakes you up, it will be make sure it goes off during the lightest sleep phase, making it much easier for you to get yourself going in the morning.

Does it sound kind of like the popular iPhone app Sleep Cycle? It’s a similar concept, except that a) it’s free, and b) it’s available for both iPhone and Android. It also creates a graph of your movement throughout the night so you can see how you slept – and it lets you know what your sleep debt is.

Getting a good night’s sleep doesn’t begin when your head hits the pillow — it starts long before then. On top of having an intelligent alarm function like SleepBot, the 99-cent iPhone app MotionX-24/7 also helps you keep track of how active you are during the day and lets you know when you’ve been idle for too long. Apparently, staying active throughout the day leads to better sleep at night. Who knew!

It’s a pretty well-known fact that looking at computer, tablet, and phone screens before you go to bed disrupts your sleep. It has to do with how our eyes deal with the white and blue light that most electronic screens give off once the sun goes down. Most of us can’t reasonably be expected to stop looking at all our electronics after dark — but that’s why f.lux exists.

Available for the iPhone, iPad, and even your computer (Mac, Windows, and Linux are all supported), this free app makes the color of each device’s display adapt to the time of day. As a result, the extra hours spent staring at your screen won't stop your body from making melatonin when you need it — which means an easier sleep when you finally hit the hay.

Putting f.lux on an Apple device involves jailbreaking it, so I limited my usage to the one-click-and-it’s-installed Windows version. I did notice the difference when the screen automatically dimmed — things that would normally be white looked a little more like a warm peach shade — and it was admittedly much easier on the eyes.

If you really hate the color, you can adjust how much you screen dims: Take it all the way down to “incandescent,” put it in the midrange “halogen” setting (the default, and where I kept mine set), or keep it all the way up at “daylight.” Interestingly, I slept better the nights that I was up in front of my computer versus when I was playing the new Professor Layton game on a f.lux-less device. Coincidence? Maybe, maybe not.

Don’t have an Apple device? Android users can get something similar using the app Twilight.

At $5.99 for the iPhone version and a whopping $9.99 for the Android one, pzizz is definitely on the pricier end of apps. Considering it does, however, claim to cure insomnia, it is quite possibly worth it (the masses of highly rated reviews in the iTunes store and on Google Play certainly seem to think it is).

Essentially, the app is a really fancy sound machine — but unlike a lot of white noise apps, it creates a unique soundtrack for you every night, which means your mind won’t get bored by repetition. It includes a bunch of different modes, from Energize to Meditation, which both sound lovely.

I’ve never been good at napping — when I was a kid, I always thought it was just time wasted that I could be spending doing something else. These days, I'd love to nap, but I take too damn long to fall asleep for them to do any good.

But if you're a good napper, this handy little under-a-buck iPhone app makes sure you get the most out of your naps without disrupting your nighttime sleep — perfect for when you need a little pick-me-up in the middle of the day.

Even if you’re not the spiritual type, there really is something to be said for meditation as a relaxation method. Nothing gets you ready for a good night’s sleep like a little guided meditation. This 99-cent Android and iPhone-friendly app will walk you through three different types, from short, five-minute centering exercises, to a 24-minute whole body experience. Ready, set, zzzzzzzz…

More like this
5 Crystals To Manifest Better Sleep
By Megan McCarty
TikTok Is Using A ‘Love Island’ Sound To Expose Their Weird Crushes
By Courtney Young
What Is “Night Luxe?” Breaking Down TikTok’s New Aesthetic
By Courtney Young
The Viral TikTok “30,000” Sound Fits Nearly Every Scenario
By Courtney Young
Get Even More From Bustle — Sign Up For The Newsletter