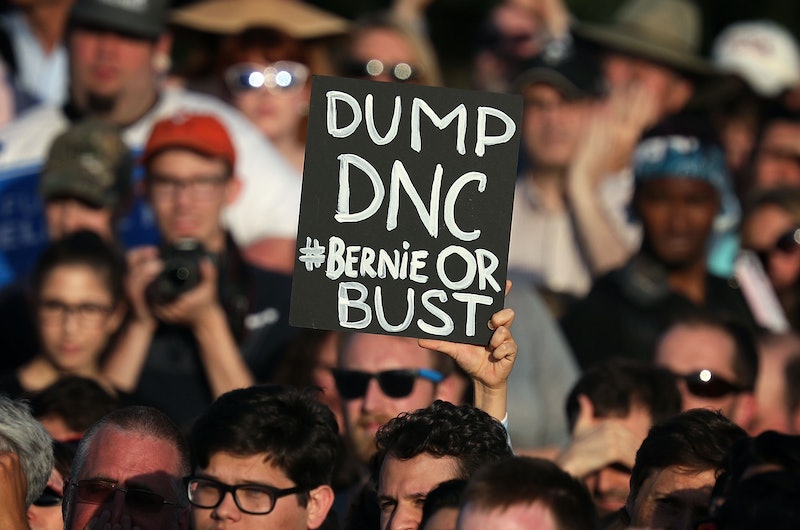 Another last glimmer of hope for the diehard Bernie Sanders supporters was quashed Tuesday, as FBI Director James B. Comey announced that "no charges are appropriate" in the matter of presumptive Democratic Nominee Hillary Clinton's private email server. The prospect of Clinton getting indicted, and Sanders then getting the nomination by default (which very well may not have happened even if she had been charged), was pretty much gone. While the reactions of Republicans on Twitter was swift and furious, there was another demographic present in the mix: some of Sanders' most committed followers. And sometimes, it was hard to tell the two groups apart.

I still find it surprising that, at a certain point, if you move deep enough into Trumplandia or Sandersville, some of the supporters of the two populist candidates start sounding kind of the same. Academically, it makes sense. Both candidates surged on anti-establishment rhetoric in a year when the establishment had a bad reputation. While many Sanders supporters have somewhat begrudgingly thrown their support behind their party's presumptive nominee — as best articulated by the #GuessImWithHer hashtag — some of the most loyal remnant are committed to their guy... and to their hatred of their party's gal.

And while these Tweeters don't represent all (or even a significant portion) of Sanders' supporters, there has been anxiety among Democrats over how many of his followers will vote for Clinton. A CNN Poll released June 21 showed that nearly 75 percent of Sanders' supporters would vote for Clinton (though that number decreased when third-party candidates were added into the mix), so it seems most will fall in line behind the former Secretary of State. However, there is still plenty of anti-Clinton sentiment among them, including some of the higher-profile supporters like actor Rosario Dawson.

While "the system is rigged" has long been a mantra of the Sanders campaign, tweets like that echo another hot take which immediately followed Comey's announcement:

Even if the Sanders campaign is all but over, the emotions his supporters feel clearly can't be turned off so quickly. Anyone doubting that should look up the #SeeYouInPhilly hashtag, in which people seem to struggle to avoid using Trump's catchphrase "Crooked Hillary."

Anyone who's been a Clinton supporter from the beginning knows that a certain portion of her opponent's support comes from a dislike (if not outright hatred) of her. And for those who subscribe to the theory of Crooked Hillary, Tuesday's FBI announcement probably feels too perfect. But the real test will come in November, when it comes to whether these supporters — whether by voting for a third-party candidate or not voting at all — are willing to risk putting Trump in the White House.