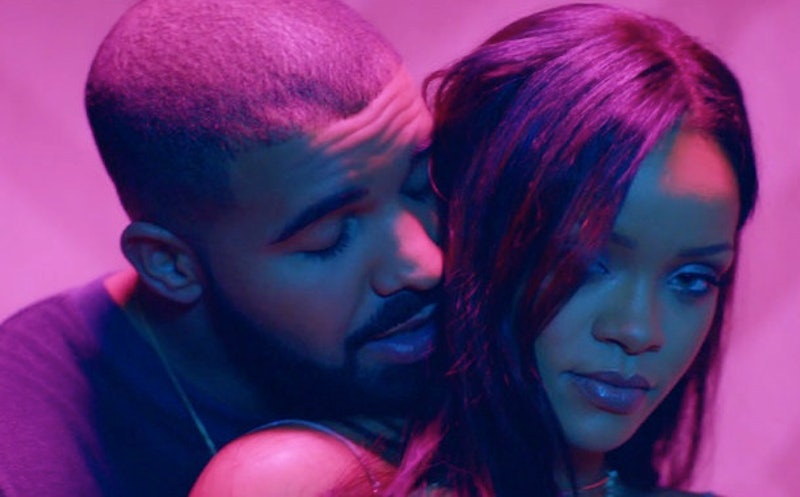 Judging by his lyrics, love is certainly not Drake's strong suit. It's something we've learned time and time again from his music, because his lyrics get into the nitty gritty of his failed relationships and the women he feels have done him wrong. But, if there's one woman he seems to put on a pedestal, it would definitely be Rihanna. Drake and Rihanna are basically the Ross and Rachel of our generation, leaving the world helplessly wondering will they or won't they finally make it work after years of false starts. That's why hip-hop shippers all over the world were pretty excited about the recent rumors that Drake and Rihanna might be dating again.

While photos of the two hanging out are pretty hard to ignore, the pics will never truly unveil how Drake really feels about Rihanna. For that, fans don't have to look much further than Drake's music, where his on again, off again relationship with RiRi is spelled out in lines that have him choosing her every time — even if he sounds exasperated about that choice. Sometimes he even mentions her by name, like on Views, an album that makes it very clear that RiRi is endgame for Drizzy.

As these 13 songs show, Rihanna's been there all along: From Thank Me Later to Views and the many albums, EPs, mixtapes and one-off singles in-between.

“When you’re ready, just say you’re ready/ When all the baggage just ain’t as heavy/ And the parties over, just don’t forget me/ We’ll change the pace and we’ll just go slow”

On Drake's 2012 duet with Rihanna, he's in full boyfriend mode, letting RiRi know that when she's ready, he's ready. Could that time finally be now? The Internet sure hopes so.

Hmm, can't help but think this line off this Views cut is a coy shout-out to Rihanna, who seems to be just too busy for Drake. He doesn't seem to mind though, being that on his OVO Radio show, Drake talked about the "genuine energy" he and Rihanna have. To him, it's what makes their many duets work so well. "I think [the chemistry] is what makes the records better, though," he said. "It’s something genuine there. We’re not forcing some story on people." Those songs are real people, which means they would work, work, work, work as couple in the studio and outside it.

"Who coulda predicted Lucky Strike would have you stuck with me?/ What happened between us that night, it always seems to trouble me"

The first hint that Rihanna and Drake were dating came from a 2009 Page Six report that the two were seen at the Lucky Strike Lanes & Lounge "drinking whiskey and apple juice and making out" all night. So, it's hard not to read into that "Lucky Strike" mention on this 2010 Thank Me Later song — and the fact that there may have been some trouble in paradise, at least in Drake's mind. Case-in-point: He would later tell The New York Times that he felt Rihanna was leading him on, something he admits he'd done before himself to other women. RiRi may have been giving him a taste of his own medicine, but it was clearly a taste that Drake wouldn't be able to get enough of.

It wouldn't be surprising if this was a reference to Rihanna, who, at the time of this track's release in 2014, Drake was getting questioned about a lot. He even talked about her in Rolling Stone that same year, telling the magazine that Rihanna was "the ultimate fantasy." But, he made it clear in that interview that while he and Rihanna had dated previously, she was now just a friend: "That's my dog for life." Could Rihanna now be his wifey for life? That's the real question.

On Rihanna's 2010 track, Drake isn't hiding his sensual side. In fact, he's downright bragging about his chemistry with one special lady, who I can't help but assume is Rihanna. I mean, she is the one singing with him on this track. Six years later, they may finally have the time to make this work. #NoExcuses.

"I mean, where you think she at when she ain't with you?/ Wildin', doing shit that's way out of your budget"

Could this be about Chris Brown? When Drake released this track in 2013, Rihanna was reportedly seeing Brown again, who was definitely not making as much money as Drake was. Shots were certainly fired with this line, but, in the end, it didn't get him the girl — though, in Drake's opinion, it definitely should have. Drake told Elliott Wilson that Brown's "insecurities" are what made Drake's music better than his. "I'm more popping than him and that at one point in life the woman that he loves fell into my lap," Drake said. "I did what a real n***a would do and treated her with respect."

Yep, this Views track is obviously about Rihanna — I mean, her name's right there in the line. But, as he makes clear, they weren't together, she was just there doing her thing just like he was doing his. But why try to find a Rihanna-type, when you can just work on having the real thing? It's something Drake seems to be realizing throughout his latest album.

“One of my baddest women ever, I call Rihanna/ But that’s because her name is Rihanna”

On his 2011 track, Rick Ross shouts out Katy Perry, Madonna and Wiz Khalifa, but Drake saves his kindest words for Rihanna. Coincidence? I think not.

“Why do I settle for women that force me to pick up the pieces?/ Why do I want an independent woman to feel like she needs me?/ I lost my way”

Rihanna is definitely an independent woman. She made this clear in Vanity Fair last year when she said, “I’m fine being with myself. I don’t want to really let anybody in. I’ve got too much on my plate, and I’m not even worried about it.” Drake, on the other hand, may be a little worried about it — worried he won't be enough for a woman like her. Jury's still out on that one, Drake.

"Everyone said we look good on paper/ You deserve that action/ Plus you get more paper than I do, that sh*t attractive"

After all the rumors that he was dating Rihanna, it seems like Drake just comes right out and says what everyone's thinking in this track: they should just get together already. She deserves it, he deserves it, we all deserve it. The math just adds up.

"When I see potential I just gotta see it through/ If you had a twin, I would still choose you/ I don't wanna rush into it, if it's too soon"

On Rihanna's Anti track, Drake is spilling his emotions on the floor. But, it all sounds much more mature, like Drizzy's been doing some thinking and finally realized good things are worth the wait. This is Rihanna after all.

This one off Views is not too specific, and most believe it's about his falling out with Nicki Minaj over Meek Mill. But, I don't think it's out of the realm of possibility that this song could be about Chris Brown and Rihanna. Perhaps Drake wanted Breezy to know that he's not the guy for Rihanna — not even close.

“I don’t know how to talk to you/ I just know I found myself getting lost with you/ Lately, you just make me work too hard for you/ Got me on flights overseas, and I still can’t get across to you”

On this Views track, which features Rihanna, Drake is getting real and it's hard to believe he isn't talking about his duet partner at least in some small sense. While Rihanna seems to be putting Drake strictly in the friend zone, this is his response to all those pent-up emotions. I can't help but fully read into each and every line of this song, which, with each listen, seems to reveal more and more about these two's relationship.

Based on these songs, it seems Drake's musical desires may have finally caught up with his real life fantasies. But, whether Rihanna and Drake work out in the end, expect for him to feel all the feels on anything he releases post Views.