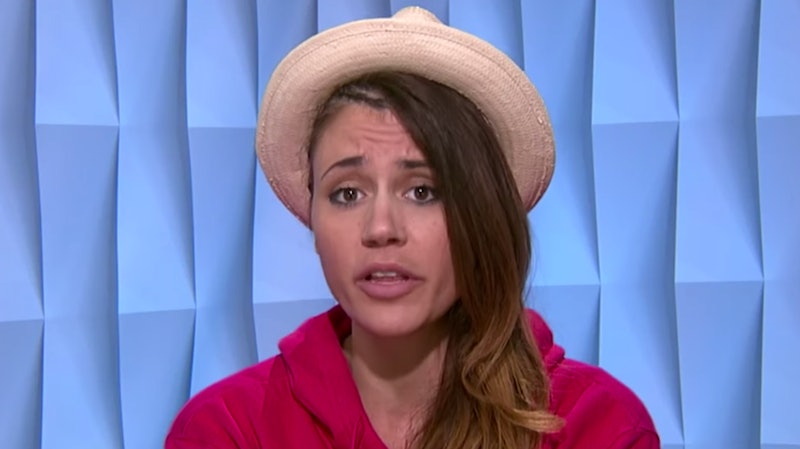 The 8-Pack alliance might be crumbling already on Big Brother . After Victor Arroyo won the Roadkill Competition and put Tiffany Rousso on the block, the once cool and collected member of the 8-Pack and the Fatal Five alliances became a paranoid mess. Following her nomination for eviction, Tiffany went to the other members of her alliance — Frank Eudy, Da'Vonne Rogers, Nicole Franzel, James Huling, Michelle Meyer, Zakiyah Everette, and Corey Brooks — and Head of Household Paulie looking for reassurance that she wasn't being evicted. After that moment of paranoia, it looks like the 8-Pack alliance could be turning on Tiffany on Big Brother .

Tiffany was so freaked out by being put on the block, that she almost immediately burst into tears in front of Paulie, asking him if this was all part of an elaborate plan to backdoor her out of the house. Paulie insisted that it wasn't — his focus remained on getting Victor out of the house, which meant ensuring that he didn't win the Power of Veto. However, because Tiffany was the Roadkill nominee, if she won the Power of Veto and took herself off the block, they wouldn't be able to backdoor Victor, as he would have been able to chose the replacement nominee. If Tiffany wants to stay on her 8-Pack alliance and stay on good terms with Paulie, then she needs to throw the Veto competition.

Tiffany's freak out did not do her any favors in the house. Her strong reaction to being put on the block had Da'Vonne ready to flip the script and evict Tiffany instead of Victor. "The paranoia, the emotional rollercoaster — and that worries me, that I cannot play with," Da'Vonne said. And Da'Vonne wasn't the only one who felt that way. Tiffany's tears had both Paulie and Frank on edge, and the other girls in the 8-Pack (aka the Fatal Five) minus Tiffany all agreed with Da'Vonne when she said she was worried that Tiffany was a loose cannon. Sure, she's loyal when everything is fine, but the second things go wrong she's only out for herself. At least, that's what Da'Vonne thinks after the POV competition — Tiffany lost, but she definitely did not throw the competition like she was supposed to.

At the end of the episode, Paulie succeeded in getting Victor on the block. So now the 8-Pack has a decision to make: either backdoor Victor as planned, or take this opportunity to get Tiffany out of the house.