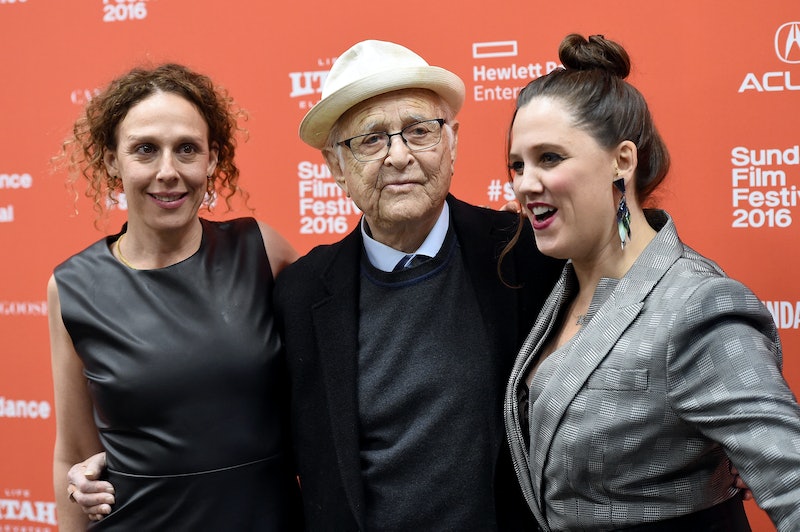 Whether you know it or not, Norman Lear has probably affected the TV you adore. The television pioneer is responsible for some of the most important sitcoms in history, from All in the Family to The Jeffersons, as well as some of the most compelling women the small screen has seen. One of the most notable moments of Lear's legacy, now chronicled in a new documentary, Norman Lear: Just Another Version Of You , came in a 1972 episode of Maude , where the title character, played by Bea Arthur, has an abortion. The event marked one of the first times a TV show had broached the topic, and though Lear created Maude as a liberal, feminist foil to some of the more conventional elements of his shows, the icon recalls how the character still struggled with the complicated idea. "It was the '70s, and my wife was swept up in the women's movement, I was swept up in the women's movement," Lear tells Bustle. Today, the producer considers it to be some of the most human television he's produced.

This event and much more are discussed in the new documentary, in theaters July 8. Directed by Heidi Ewing and Rachel Grady, the film covers everything from Lear's massive resume to his political beliefs. "If Archie [Bunker, of All in the Family] were around for this election, he'd think it was all a bunch of crap," Lear says now. "Donald Trump is the middle finger of the American Right." Clearly, Lear is a man unafraid to speak his mind, and he says that he considers himself to be a combination of Maude and her foul-mouthed cousin, Archie.

Lear's outspoken nature and refusal to shy away from controversial topics made a perfect fit for filmmakers Ewing and Grady. The documentarians tend to chase down stories that take them into uncomfortable situations and highlight systems of injustice. For example, their 2006 Academy Award-nominated film, Jesus Camp, led them to the intense world of charismatic Christian communities and gave "how I spent my summer vacation" a whole new meaning. "You don't want to do something where you're pretty sure of the outcome," Ewing tells Bustle. "If you're not learning and enjoying and surprised, then nobody will be."

Viewers will definitely be intrigued by Just Another Version of You. The doc explores how, the next time someone tries using a "generational difference" to excuse racism or misogyny, Lear's work provides a perfect counterpoint. His influential and socially-challenging shows not only changed the landscape of comedy, but also altered the public's relationship with issues like segregation and poverty, stretching the limits for marginalized communities in pop culture. And while most of his innovative work is now in syndication, the 93-year-old producer can still recall what inspired him to create such progressive narratives for TV.

"I understood when I was nine years old the foolishness of the human condition," Lear says. "My father was arrested, and he was going to jail for three years. My mother was selling the furniture, and some asshole puts his hand on my shoulder and said, 'Well, you're the man of the house now.' Then, a moment later he's telling me, 'There, there. A real man doesn't cry.' And I knew he was a fool."

Combined with the anti-semitism Lear says he encountered before and after WWII, this critique of "foolishness" eventually resulted in beloved characters and rich, comedic depictions of the United States' political currents. The themes of his shows — economic inequality, reproductive justice, segregation — might not seem like knee-slapping material, but in discussing these ideas through the comfort of a sitcom structure, Lear was able to speak to the experiences of everyday citizens.

Ewing and Grady both grew up watching reruns of Lear's shows and say that they wanted to make a documentary that highlights the societal impacts of the producer's work. "We couldn't believe that there hadn't been a film made about him yet," says Grady. It is hard to believe, considering how impressive Lear's legacy is, but Ewing and Grady's doc is a worthy tribute. Here's hoping that come July 8, this small-screen legend takes the big-screen by storm.

More like this
12 Must-Watch Documentaries To Honour Black History Month UK
By Sophie McEvoy
Mel B Speaks Out Against Domestic Violence In A Powerful Speech
By Sophie McEvoy
At 14, Jurnee Smollett Was Taking Meetings With Missy Elliot & Lauryn Hill
By Chloe Foussianes
A New Scooby-Doo Movie Confirmed Velma Is Gay & Twitter Is Pumped
By Radhika Menon
Get Even More From Bustle — Sign Up For The Newsletter