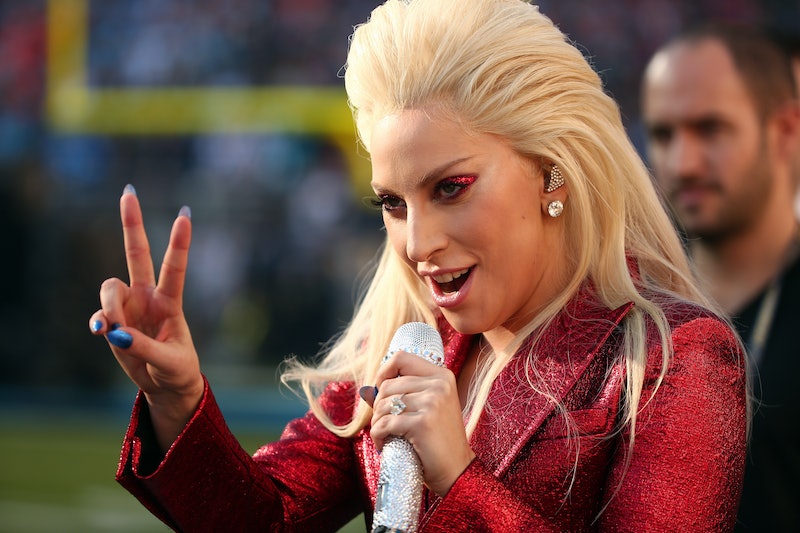 Lady Gaga's new album has been in the works for quite some time now, and thankfully so — it's been almost three years since Artpop, Gaga's last solo album, and we're all getting impatient. Sure, we've heard her jazz amazing album with Tony Bennett in 2014 and listened to the powerful single "Til It Happens To You" since then, but, speaking as a fan, I know we've all been long feeling a specific type of musical void that only a Lady Gaga album can fill. Luckily, it sounds like were getting closer to filling said void, since Gag's long time collaborator and producer RedOne just dropped a few hints to People about the record. He didn't give a definitive answer as to when Lady Gaga's new album will be released, but he did give us enough details to tide us over until that information becomes available.

Gaga and RedOne — the producer who co-wrote and created some of her biggest hits like "Just Dance," "Poker Face," and "Love Game" — have already recorded eight (!!!) tracks for the album. That's like, almost all of the tracks? Right? RedOne told People, “All I know is that we did eight great songs so far, and I think we have incredible songs." The only thing: RedOne isn't totally sold on whether or not Gaga will even use the songs for her forthcoming LP. “It’s up to her: It’s her album, it’s her creative process, it’s her world, and I’ll be happy for her whatever way she takes it." I think I speak for everyone when I say, let's hope she takes it.

It sounds like the songs they've already recorded are quintessential Gaga, so I can't imagine why she would axe them. RedOne explained the tunes, “It’s a mixture of classic music and futuristic, too — I didn’t want to go too far from what she is. We kept it [similar to] what Gaga is, what she’s done all these years. It’s special.”

Audiences have been teased a new album since January of 2015, when Gaga posted a photo of herself and RedOne in the studio. Since then, she's starred as The Countess in Ryan Murphy's American Horror Story: Hotel, won a Golden Globe, and was nominated for an Oscar — so even though we've all been salivating over the idea of a new Gaga album, it comes as no surprise that it has yet to drop. She's been busy!

The only thing left to do is sit and wait for Gaga or RedOne to give us some actual dates. Until then, it looks like Little Monsters will be twiddling their monster thumbs in anticipation.