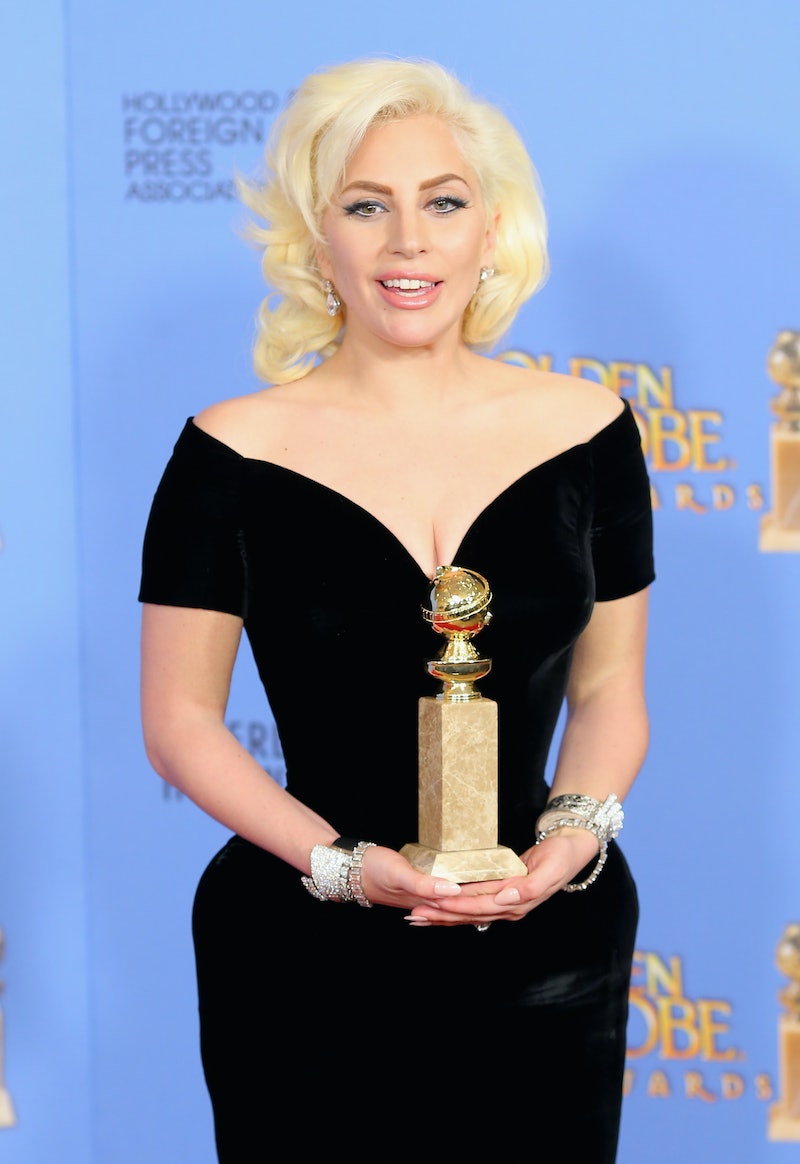 Paws up, Little Monsters (are people still saying that?): Lady Gaga's new album is coming in 2016! Entertainment Weekly reports that Gaga made the big announcement backstage at the 2016 Golden Globe Awards on Sunday evening, shortly after winning Best Actress In a TV Movie or Miniseries for her role in American Horror Story: Hotel. The 29-year-old superstar has been teasing her upcoming musical project for quite a while now, but this is the first time she's given fans a clue as to when it might arrive.

Though Gaga's 2014 duets album with crooner Tony Bennett, Cheek to Cheek, was both a commercial and a critical success (it won a Grammy for Best Traditional Pop Vocal Album in 2015), the singer's voice has been largely absent from the pop radio airwaves since the premiere of her last solo effort, ARTPOP, in November 2013.

Needless to say, Gaga's fans are chomping at the bit to find out what their idol has in store for them next. Fortunately, the "Applause" hit-maker has been dropping clues about her new LP since at least December 2014. So, what will it sound like? Who is she working with? And will it mark "a return to form" for the avant-garde artist? We can only hope. Here's everything we know about Lady Gaga's new album so far:

She May Have Looked To The Past For Inspiration

In December 2014, Gaga told Yahoo! Style that she wanted her fans to be "surprised" by her new album, but she did offer the following cryptic metaphor as a description: "ARTPOP was, you know, the acid-making record. And this record is like — my old self as a cadaver. And I'm just, I'm operating on my old self."

As usual, I pretty much have no idea what Gaga is talking about. But, here's my take on what she said, anyway: While recording her new album, Gaga is looking to her "old sound" (or "old self") for inspiration, updating it (or "operating" on it) along the way so the music feels modern and fresh. Am I close? Or am I way off? I suppose we'll just have to wait and see.

She Worked With Two Music Legends

Warren co-wrote "Til It Happens to You," Gaga's emotional ballad for The Hunting Ground, a 2015 documentary that explores the rape epidemic on college campuses in the United States. The track premiered in September 2015, but Rodgers doesn't appear to have had a hand in creating it. Therefore, it's possible that the trio were working on something else (like something for Gaga's new LP) when the above picture was snapped. I'll keep an eye out for more details.

She Teamed Up With RedOne

Producer RedOne helped shape the sound of Gaga's early material, co-writing and producing smash hits like "Just Dance," "Poker Face," and "Bad Romance." Though RedOne was less involved with Gaga's Born This Way and ARTPOP projects, the two musicians were photographed in the studio together in January 2015, suggesting that they could be working closely once again. I can't wait to hear what they came up with!

SHE MAY HAVE WORKED WITH ADELE

In January 2015, Gaga and Adele took a mysterious selfie together, and the circumstances surrounding it have yet to be explained to my satisfaction. Just what, exactly, were they up to? Were they... writing a song together? Could be. Were they... recording a duet together? ALSO COULD BE.

In October 2015, Gaga re-posted the selfie on Twitter, writing that it was taken the night Adele played "Hello" for her for the first time. That's all well and good, but I don't think we're getting the whole story here. I refuse to believe that these two got together for the sole purpose of listening to one measly five-minute song. That's what Skype and FaceTime are for! I suspect we could be hearing a Gaga/Adele collaboration sometime in the near future. (Fingers crossed.)

She Hit The Studio With Mark Ronson

In December 2015, British singer Lily Allen let slip that Gaga and producer Mark Ronson were recording together. Ronson is, of course, responsible for giving us one of 2015's biggest anthems, "Uptown Funk." Admittedly, Gags and Ronson seem like a bit of an odd pairing, but I'm going to keep an open mind. After all, sometimes collaborations that seem like a mismatch at first turn out to be really incredible (like Rihanna and Calvin Harris' "We Found Love," for instance).

That's all of the info we have so far! 2016 is certainly shaping up to be an exciting year for pop music. Stay tuned for further developments, Little Monsters.