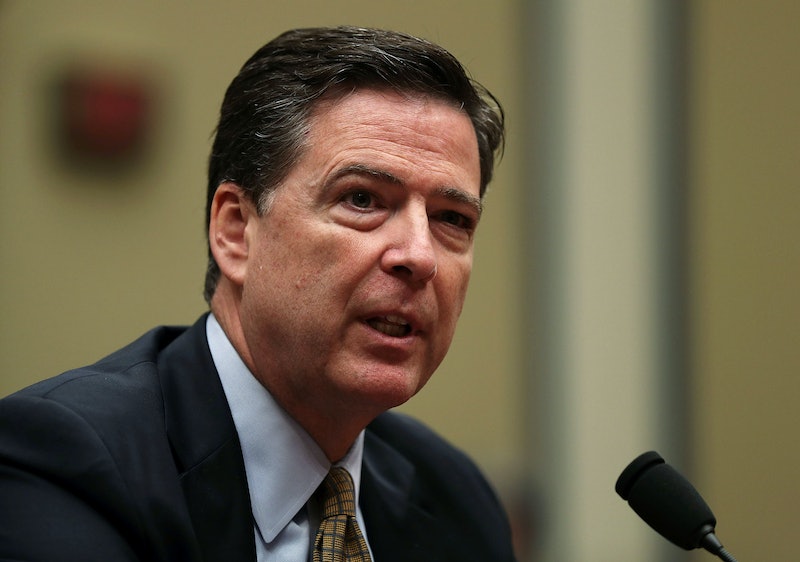 On Thursday, as I watched James Comey speak before the House Committee on Oversight and Government Reform, I was struck by how he kept an admirably level head during his testimony about the FBI's Hillary Clinton email investigation. Despite plenty of opportunities to lose his cool or say something dumb, the FBI director remained clear, calm, and much more sane-looking than most of the people questioning him

At one point, when asked if Clinton should be granted an FBI security clearance, Comey defended the FBI screening process and calmly responded, “I don’t want to answer a hypothetical." He added, "The FBI has a robust process in which we adjudicate the suitability of people for employment in the bureau.” He also did his part in debunking the opinion many Republicans have been attempting to float in recent days — that General David Petraeus faced harsher consequences for lesser crimes. Comey strongly laid out that he felt Petraeus' case was different because it involved "clearly intentional conduct. [He] Knew what he was doing was violation of the law," along with "huge amounts of information. If you couldn't prove he knew it, raises the inference [that] he did it and effort to obstruct justice. That combination of things makes it worthy of a prosecution."

Then, of course, there was everything he endured from Florida Rep. John Mica. In addition to asking him a much-derided question about whether or not Comey had seen Hamilton (apparently to make a point about the carefully choreographed dance that is Clinton’s politics), Mica accused the FBI of being in cahoots with Clinton as it investigated her emails, saying there was “something fishy” about the whole thing.

Comey, at this point, politely eviscerated Mica, and made it pretty clear he was not there to play such games:

Look me in the eye and listen to what I’m about to say ... I did not coordinate that with anyone. The White House, the Department of Justice, nobody outside the FBI family had any idea what I was about to say. I say that under oath, I stand by that. There was no coordination. There was an insinuation in what you were saying … I don’t mean to get strong in responding, but I want to make sure I was definitive about that.

Basically, Comey kept his cool for the duration of the testimony, even when it became very ridiculous. While one Republican after another tried to throw him off his balance and find some reason to keep Emailgate burning, he refused to be goaded or misinterpreted or generally poked at by people spoiling for a fight. As a result, GOPers seem to have come off a bit the worse for having picked this fight — especially given how widely mocked some of the highlights have been and how nothing especially damaging for Clinton was teased out of it.

Granted, Comey's statement that Clinton was "not particularly sophisticated" doesn't exactly help her 2016 presidential odds — especially when taken in combination with his Tuesday press conference, during which he called her "extremely careless" in her email practice.

But it's clear that someone came out the winner, and his name is Comey.