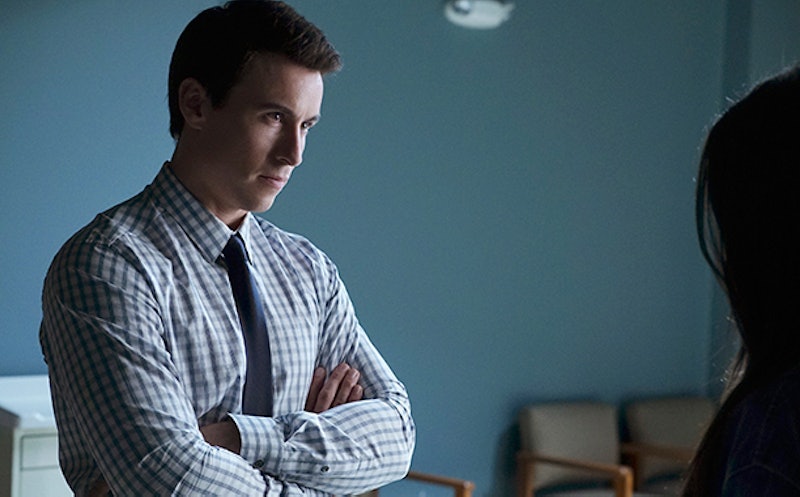 Behind every great season of Pretty Little Liars there needs to be an equally great villain. And even though he originally just started out as Alison's seemingly innocent husband, Dr. Elliott Rollins has proven to be quite the formidable (and highly memorable) foe throughout the show's seventh season. The evil doctor may have met his maker during last Tuesday's episode, however, don't think that'll be the last we've heard from (or maybe even seen of) his character from here on out. During a recent interview with Bustle, Huw Collins, who plays Rollins on the series, revealed a few interesting spoilers about Rollins' future on Pretty Little Liars and teased what fans could end up finding out about his mysterious backstory.

"Some of his backstory you will learn from exposition through the Liars delving deeper into Rollins' past," Collins explains. "As they figure out more about him, you will figure out as an audience member more about him." But fans won't just have to depend on the Liars' research findings alone to find out more about their accidental murder victim.

According to Collins, we could actually see Rollins back on our screens, not because he's necessarily alive, but rather thanks to the power of PLL flashbacks. "I think there will definitely be some room for flashbacks, looking at how Rollins and Mary began working together and Rollins and Charlotte's relationship," he shares. "So I hope you'll get to see a good bit of why he ended up as such a maniacal psychopath."

Part of that mystery will also include what Toby discovered in the police database which showed that the real Elliot Rollins received a moving violation back in 1958. Given how young Rollins clearly is, it's safe to assume he's stolen this man's identity, but why and if he's not Rollins than who the heck is he? Collins assures viewers that all will be explained in due course. "You will learn more about that," he promises in regards to Toby's discovery. "Now that Elliott's story is beginning to unravel, you will find out more and more about him as the next episodes progress. You will definitely find out a lot of who he is and what he's about."

Perhaps that's even why the episode was titled "The Talented Mr. Rollins" in an obvious homage to The Talented Mr. Ripley, which was all about mistaken/stolen identity and death. So maybe Rollins' actions weren't just about avenging Charlotte like we originally thought. "I think it would be dangerous to assume that you know Rollins' true motives or you will ever know Rollins' true motives," Collins reveals. And even though he's disappointed that this all had to happen so early on in the season, he loves the shock factor that came with his death and the big moment he's been able to deliver to the Rosewood universe.

But just because Rollins is dead and buried, that doesn't mean the Liars' problems are over. Far from it actually. Odds are someone will want to avenge this character's death, whether it be Mary Drake or A.D., which means our Rosewood gang better watch their backs. The worst is yet to come.