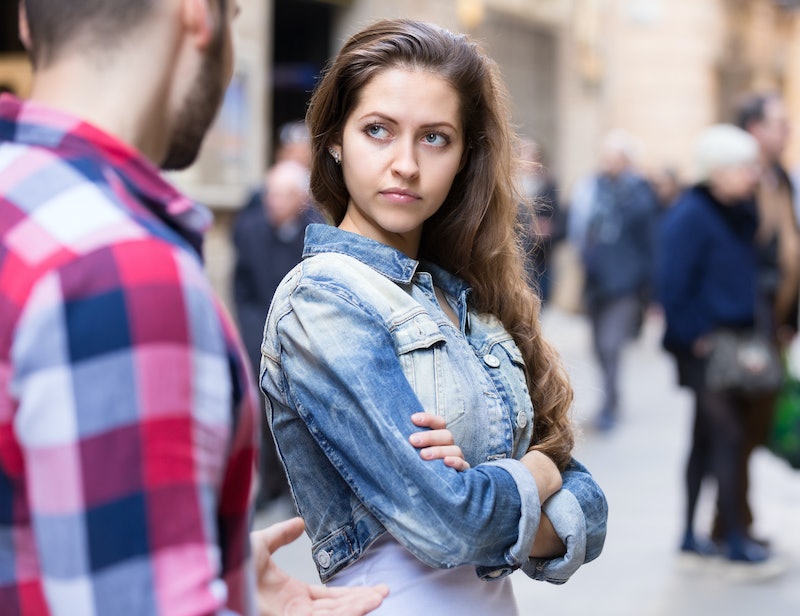 Because we can literally never have nice things, a great hashtag meant to bring awareness to the problem of street harassment — #NoWomanEver — has been co-opted by men who are defending the practice with their own hashtag, #NoMenEver. The original hashtag arose as a way for women to address the sorts of absurd comments they are subjected to when simply trying to occupy space as a woman in the world. They tackled everything from the time-honored technique of men "complimenting" a woman, only to call her names and insult her when she ignored them, to the perceived-as-benign "why don't you smile more?" to the much scarier tactic of posing a physical threat to a woman when she ignores your advances.

#NoWomanEver would call out these behaviors, tack on an "and I just knew he was the one," followed by #NoWomanEver. Of course, men swooped in pretty quickly to reassure us that they continue to remain confused about systems of oppression and how power works. Men started using the hashtag #NoManEver to accuse women of being "sexist," to defend catcalling as merely complimentary and necessary for the propagation of the human race (?!), and, in very rare cases, to point out the unrealistic expectations toxic masculinity puts on them.

While it's true that feminism doesn't only benefit women, and dismantling toxic masculinity could seriously improve the lives and emotional health of men, as well as women, taking up a space women have carved out for themselves to share their experiences is not exactly the best way to prove that you are hip to the struggle.

Of course, most of the tweets were not thoughtful critiques of the ways in which misogyny harms men. Most of them were very, very confused musings like this:

Yikes. So a lot of what's going on here are the same old problems of fragile masculinity: an inability to understand that what women are speaking out against is a systemic culture of men feeling entitled to comment on a woman's appearance in public, to have an aggressive (and sometimes downright violent) response if she reacts negatively, and the ultimate belief that this is a harmless act. The dudes of #NoManEver, of course, believe they are being personally and individually attacked.

Plus, they're ignoring that oppressed groups, in this case women, don't have the power to be "sexist," or "racist," or otherwise discriminatory, because marginalized communities by definition can't hold that kind of power.

Daily Dot spoke to the guy who seemed to start the hashtag (above user @SikoSoft), who defended catcalling, saying that "to take away the ability for men to say to a woman 'Nice smile,' 'You're beautiful,' 'I like your eyes,' or even as little as saying 'hi,' is like trying to take away a man's sexuality...and identity."

Yes, sir. I, as a woman who believes she has the right to walk the streets without being accosted by invasive strangers, am trying to take something away from men. #NoWomanEver