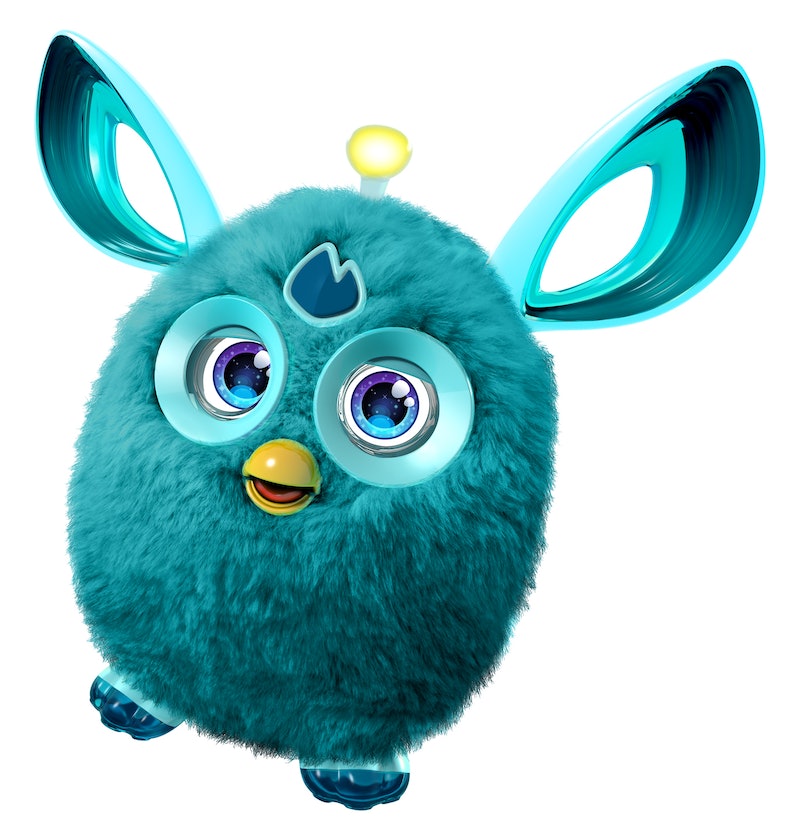 Rejoice, '90s kids! Today in nostalgic gifts from the toy-making gods, we bring you the Furby Connect, a reboot of that iconic fuzzy alien toy from our childhood. This adorable little guy (or girl) is new and improved, though, with all the high tech bells and whistles you might expect of a digital age Furby. So how does Furby Connect work? Let's just start by saying we're definitely not in the '90s anymore, Toto. Times, they have a'changed, and the Furby Connect is the latest toy to bridge the gap between our wistful remembrance of the toys we grew up with and our modern compulsion for connectivity.

Since we're clearly so keen on revisiting the past, let's take a look back at the OG Furby's illustrious history. The public first laid eyes on the Furby back in 1998 at the American International Toy Fair, where it was brought by inventors Dave Hampton and Caleb Chung. The intention with this alien hamster-owl-what-have-you hybrid was to create a toy that was responsive to human interaction and learn commands. All Furbies started out speaking their native language, Furbish, but picked up English words and phrases from its human owner over time. In the first year following their launch, 27 million of these cuddly toys were sold.

Of course, the Furby Connect isn't the only Furby we've seen since the '90s. There have been several revivals over the years, but none quite like this latest addition to the Furby roster. It functions via a Bluetooth-enabled app, which enables kids to develop a relationship with the toy through of-the-moment trends, videos, pop culture, and more. Sounds pretty cool, right?

In short, Furby Connect is smart, you guys. Like... really smart. But how do you get their little Furby brains going? Well, as you might expect from any modern technological advancement, there's an app for that. When new content is loaded into the Furby Connect World app, your Furby Connect's antenna lights up; this means that if you open the app, you'll be able to access the new content. Once you connect to the app, the content gets delivered to your Furby Connect through the wonders of Bluetooth.

Want to see it in action? The good people at Mashable gave the Furby Connect a try and demonstrated how engaged they are.

Content updates include songs and videos — and since those can be produced in great abundance, it stands to reason the novelty of this new and improved Furby is here to stay for quite a while. Two Furby Connects can also "talk" to each other, and, oh, did I mention Furby Connect can lay digital eggs and poop all manner of things into a little digital toilet on the paired device's screen? If you're having Tamagotchi flashbacks, you're not alone.

But wait, there's more: You know how the OG Furby used to continue chattering no matter what time of day or night it was? Now the toy comes with a sleepy eye mask accessory, which turns off the new Furby's connectivity, effectively silencing it when you're, you know, trying to sleep. So there you have it — our childhood toy that at once elicited fierce obsession is back, and this time Hasbro has basically thought of everything. And, admittedly, the new and improved Furby is pretty darn precious.

Furby Connect is available on Amazon now, and will be released on July 12; it will also hit retailers nationwide in the fall of 2016. Have fun, kids!