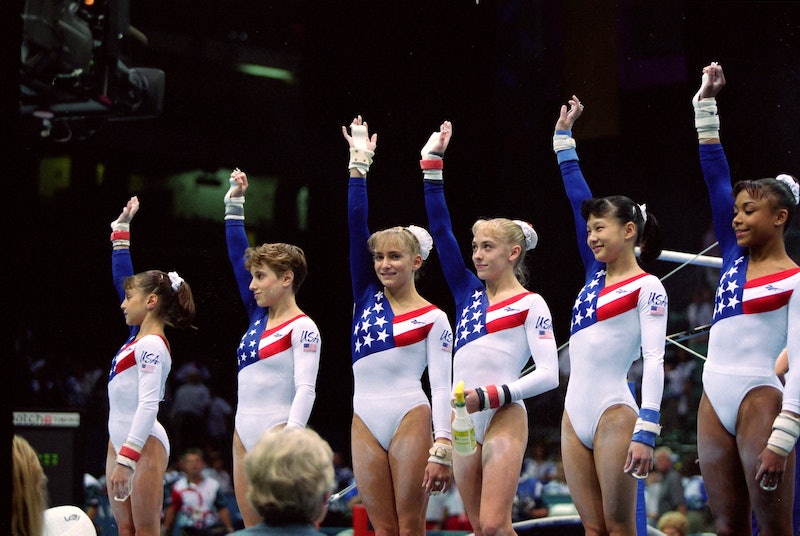 If there's one fashion statement we've come to expect from Olympic gymnasts, it's rocking a hair accessory that perfectly matches their leotard. But how long have gymnasts been wearing scrunchies? TBH I can't remember a time seeing one of these talented tumblers wear a bun or ponytail without an accompanying scrunchie. And for good reason, too. It turns out that for at least as long as I've been alive, scrunchies have been a thing for these elite gymnasts.

Some photo research on Getty Images seems to indicate that donning a scrunchie for the Olympic games was the way to go throughout the 1990s and 2000s, but there were still traces of the scrunchie even in the 1970s. After all, when there are such specific dress code rules for gymnasts, there are very few other ways to accessorize. However, despite the scrunchie's ability to complete a leotard, the time of these hair accessories may be coming to an end.

But even though the scrunchie may be making its exit, at least for the women of Team USA, gymnasts still haven't totally forsaken this hair accessory. Here are some of the Olympic games over the past 30 years where the athletes have sported everyone's favorite, fancy hair tie. Maybe we'll see you again at this year's Olympics, scrunchie.

I spy with my little eye...THREE. Three whole scrunchies. And before they even became popular for us common folk in the '80s.

Looks like mostly ribbons in the early '80s. No worries. This was just the beginning for scrunchies' popularity.

AHA! Ribbons were beginning to be traded in for scrunchies!

Keepin' up appearances in '96 as well.

When glitter hair gel was added to the mix.

Everybody loves a good scrunchie. And glitter hair gel. That was still a thing in '04.

Was 2008 the year the trends started to change? There are more front hair-bumps than scrunchies here.

I believe scrunchies may have been an endangered species for Team USA at the 2012 Olympics.

Even if we don't see any scrunchies this year, there'll probably at least still be a ribbon or two. But I'll keep my fingers crossed for a comeback.