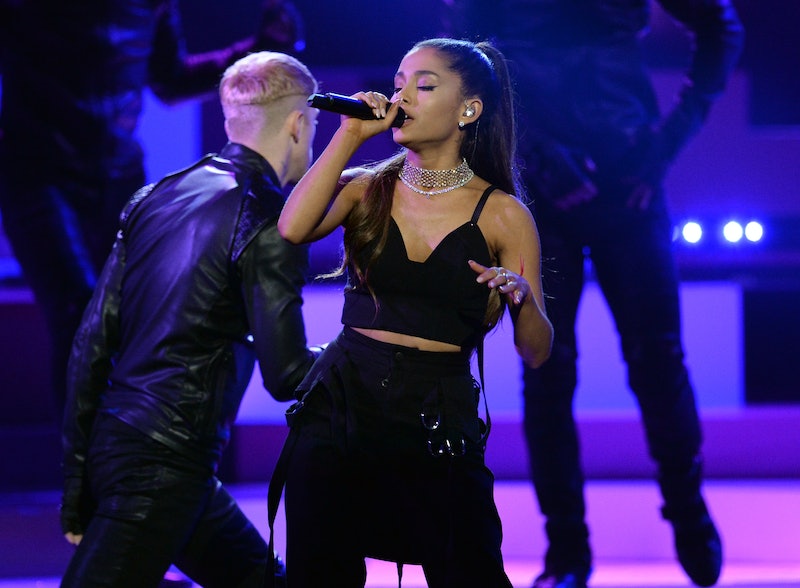 After a week filled with tragedy, heartbreak, and frustration, Ariana Grande and Victoria Monét have released a duet called "Better Days" that is both somber about the recent violence that has occurred in the United States and hopeful that one day it will come to an end. The lyrics to Grande and Monét's "Better Days" reflect the hope that love can one day conquer hate and violence, and they're incredibly powerful. Grande announced the song on her Instagram account by posting a 60-second clip in a video, and it was dropped on singer/songwriter Monét's SoundCloud over the weekend.

"During this challenging time, we have to remember that the only way we will progress is if the overruling force is #Love," Grande wrote in the video's Instagram caption, before writing a quote by an unknown source:

"Music is a universal language that all of us can feel regardless of color lines, gender, sexuality, age, race, religion…. it unifies us. We believe we can not fight hate with hate, only love. Just as we can not fight darkness with more darkness. Only Light."

She continued by honoring Alton Sterling and Philando Castile, two men who were shot and killed by police officers in July, as well as the police officers who were shot and killed by a sniper at a Black Lives Matter rally in Dallas: Lorne Ahrens, Michael Krol, Michael J. Smith, Brent Thompson, and Patrick Zamarripa. "Too many precious lives were taken from us this week, this month, this year," Grande wrote.

Meanwhile, Monét wrote on her SoundCloud post, "I'm heartbroken by all of the recent tragedies the came as a result of hatred, racism and injustice. I'm also sad at how numb some of us are to it, because it is far too common! This is not a video game or a movie you're witnessing on your screens! This is our unfortunate REALITY! When I think about how I feel, the word confused comes to mind."

But the most powerful words are the ones that Grande and Monét sing in the lyrics to "Better Days," a slow R&B jam which starts with a haunting image and message.

There's no doubt that those lyrics are referring to the recent violence that has occurred across the United States. The verse adds some hope to the situation by saying that their proposed solution begins with loving one another, instead of spewing hate and vitriol.

Baby there’s a war right outside our window.

But it's going to be all right,

As long as I got you and me

In your arms I find my shelter

Deep in your love I will hide

Baby, you and me

Stop the world when we're together

You find a way to take my mind

The chorus brings hope to the forefront as the message of the song, with the refrain "Hoping for better days / Better days / Days when things are better." The second verse hit the message even harder, with more distinct imagery of the aftermath of violence.

I can hear sirens right outside our window

And I can hear the children cry as their mothers cry

I'm praying for the people right outside my people

Hoping they find peace at night

The bridge's lyrics are a direct message from the singers to "Stop the violence / Stop the hurting / Stop the hatred / Stop the murders," bringing up the important point that if nothing is done, the violence will bleed into the next generation, too.

But how we gonna

We're all human, that's for certain

Come together, we deserve it

What kind of life will our babies have

If we don't change up and make it last

With love and hope on

"Better Days" is one of many recent songs that has been inspired by the gun violence and police brutality that has occurred in the United States. The family of Eric Garner released a track called "I Can't Breathe," echoing his final words before he died when police put him in a chokehold in 2014. Hamilton's Lin-Manuel Miranda and Jennifer Lopez, meanwhile, teamed up for a song called "Love Make the World Go Round" to benefit the Hispanic Federation for the Somos Orlando Fund, created to help those affected by the Pulse nightclub mass shooting in Orlando last month.

Each song is important and powerful, dealing with pressing issues in this country. I'm glad to see these topics get more exposure in music, and I hope the songs inspire real action.

Listen to "Better Days" above.

More like this
What Is Ariana Grande's Net Worth? When It Comes To Money, She Has No “Problem”
By Hugh McIntyre
Adele’s All-Female Lineup Includes Kacey Musgraves, Mahalia, & Self Esteem
By Shahed Ezaydi
Adele Says Postponing Her Las Vegas Residency Was “Brutal”
By Alyssa Lapid
Lizzo Proved She’s Team Jeremiah During Her ‘The Summer I Turned Pretty’ Review
By Grace Wehniainen
Get Even More From Bustle — Sign Up For The Newsletter