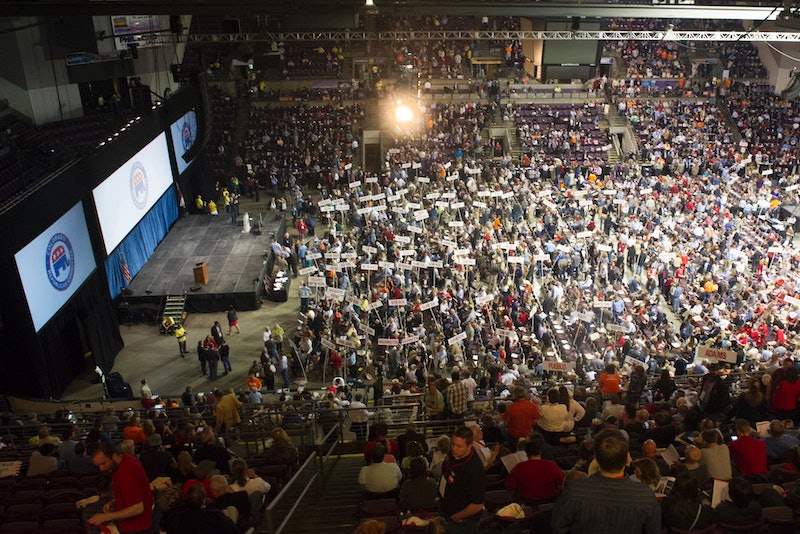 For some reason, choosing a president this time around seems to have everybody in a blur of strong political opinions about something or someone. Political views are more vocally prominent in the U.S. than the nation has seen in a long time, yet so few Americans actually realize the procedure involved in electing an American president. Only the respective party's national convention can officially determine a nominee, but generally, only politicians and politicos attend events like the Republican National Convention, which is scheduled for July 18-21 in Cleveland, Ohio. But can the average American also attend the Republican National Convention live?

Well, it's possible. A non-politician member of the Republican Party is able to attend the national convention in an official capacity by taking the steps to become a delegate or alternate delegate from that person's state of residence. Becoming an official in the state party, getting chosen by a campaign to represent their candidate in a particular state, getting directly elected into the primary (depending on the state), getting elected or appointed by a state party committee (depending on the state), and getting elected based on the results of a district vote or at a state convention or gathering are the conventional methods of getting into the, well, convention. Becoming an alternate delegate is also an option, just in case an official delegate can't make the vote due to illness, travel issues, or something human like oversleeping.

Becoming a volunteer at the big event is also a viable option. Otherwise, it's a matter of bureaucracy and that old rule of who you know — but even that isn't a guarantee to a ticket inside.

For the record, Donald Trump is currently called the presumptive Republican presidential nominee because he has not formally received the nomination from his party. With the weight of what could feel like the world resting on their decision, the Republican Party must act quickly to either nominate Trump or find an alternative using the legal means available to them.

This makes the Republican National Convention an exciting event, particularly since the GOP has had a good deal of in-fighting and heavy criticism of the presumptive nominee. For example, former presidential candidate Gov. Scott Walker and Sen. Ted Cruz have agreed to speak at the event after some personal debate, while Sen. Marco Rubio has opted out of attending the event whatsoever.

In the worst case scenario, if a person is really dying to attend the RNC, believe it or not, there's an app for that. The GOP Convention is supplying an application with options to live stream and view a 360-degree video of the occasion — so interested Americans may not need to leave their present locations to see what's happening in Cleveland.