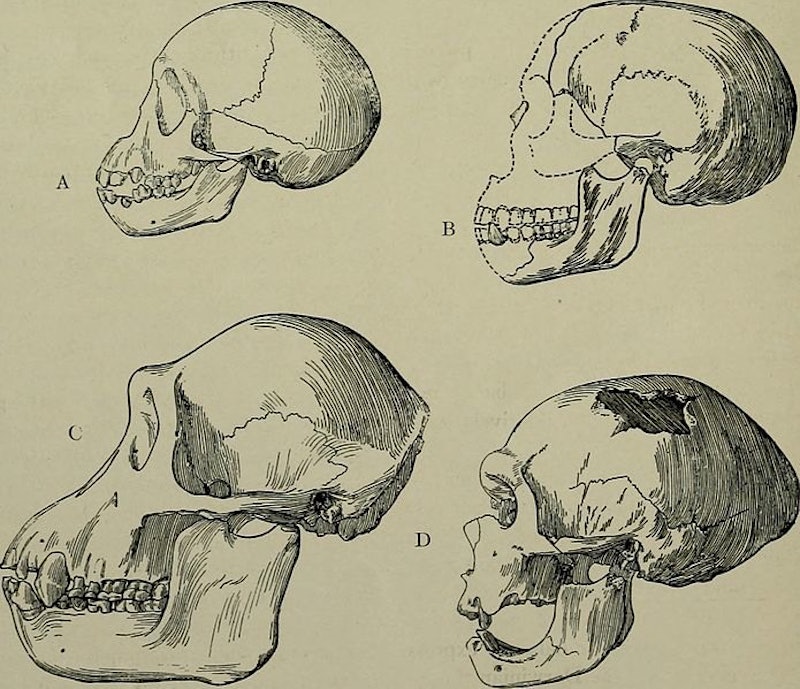 These days, when we hear about "scientific hoaxes," we generally think of times when groundbreaking research has been discovered to be fraudulent, with false results cooked up for personal gain; see, for instance, the Korean stem cell scientist Hwang Woo-suk, whose career fell apart after it was revealed he'd been fabricating experiments. But not every scientific hoax was perpetrated to further an unscrupulous person's career; throughout history, scientific hoaxes have been engineered to do everything from make a point about a problem to poke fun at a particular issue. And yes, even in this enlightened day and age, we can still be fooled with the best of them.

Some pranks and hoaxes were uncovered quickly: take the mythic Claude Jean-Baptiste Litre, a fictional figure after whom the measurement "litre" was meant to be named, who was created by an academic for April Fool's Day and debunked rapidly (but only after he'd been immortalized in an edition of Chemistry International). Others hoaxes, bewilderingly, have been revealed over time to possibly not be hoaxes at all: for example, a 2014 study that analyzed 37 hair samples labeled as coming from yetis or "Bigfoot" found that two of the samples revealed a previously unknown bear species living in the Himalayas. Yep: yetis, the mythical roaming creatures, might actually be secretive bears. Furthermore, in the modern world, hoaxes are increasingly deployed by professional members of the scientific community to draw attention to various weaknesses in others, from publishing committees to journals. It doesn't have quite the same flavor as the classic hoaxes — like the woman who pretended to give birth to rabbits — but in its own way, it's spectacular enough.

Here are seven of the most ridiculous hoaxes in the history of modern scientific enquiry.

Archaeological hoaxes are neither new nor particularly uncommon; in 2000, a Japanese self-taught archaeologist was caught planting his own geological "specimens" in holes in a scandal, and a mischievous atheist carved a 10-foot man out of gypsum and "discovered" him in Cardiff, New York in 1869 (apparently to make fun of the claims about giants in the Bible). But one of the most famous cases has to be the Piltdown Man, a forgery constructed of human and ape skull fragments and announced by its "finder," Charles Dawson, in 1912 as the "missing link" between apes and humans. In the image above, it's item B.

The Piltdown Man, which Dawson claimed had turned up in Sussex, had a large brain but primitive teeth, which were eventually revealed to have been filed down to resemble an ape's. Everybody from Dawson to Arthur Conan Doyle has been accused of being part of the hoax, though Dawson died in 1916 and nobody has ever confirmed the real mastermind.

Anybody who's done any physics will know that perpetual motion is impossible, but a conman named Charles Redheffer claimed to have invented a perpetual motion machine using gears in 1813. He initially exhibited it in Philadelphia, but the machine rapidly began to draw suspicions as people began wondering why the gears appeared to be going the wrong way. The city's commissioners built a similar fake and showed it to Redheffer, who promptly got the message and fled. He took his machine to New York City, where it was finally revealed that the machine was actually powered by an old man behind a wall who pulled the machine with one hand and ate his lunch with the other. The machine was destroyed by furious onlookers and Redheffer escaped with his life. Just barely.

If there was ever a war between humanities and the sciences, it probably wasn't improved by the mathematical physicist Alan Sokal, an academic at NYU who submitted an article to a cultural studies journal, Social Text , in 1994 claiming that quantum mechanics was a subjective construct of language and that scientific "truths" couldn't be understood in objective ways. The article, which was intended to make fun of the postmodern trend to question basically everything, was promptly published. Unfortunately, Sokal simultaneously published his own expose of the article, which promptly caused a massive furore and huge embarrassment for Social Text, as his initial article was unquestionably nonsense in basically every way. The physics in it was appalling, but Social Text defended their decision not to have it peer reviewed by anyone — not even an undergraduate physics student.

4. You Can Get Pregnant Via Bullet

This one's my favorite, even if we're not sure if it's a hoax or simply a very, very tall tale. Legrand G. Capers, an American doctor, wrote a case report in 1874 of a bewildering medical situation in which a young woman had apparently become pregnant via bullet wound. Capers wrote that in 1863, he'd attended a Confederate battle in which he ministered to a young man who'd been shot in the genitals; "the ball having ricochetted from these parts, and, in its onward flight, passed through the scrotum, carrying away the left testicle." Immediately afterwards, he was called to attend a woman a short way off, who'd also been shot; the bullet "had penetrated the left abdominal parities." Six months later, he happened to call on the woman again, only to discover that she was about seven months pregnant with an intact hymen and a very confused family.

It gets weirder. He helped the woman to deliver the baby boy that had apparently been conceived via firefight; but when the child itself was about three weeks old, he was called to examine its genitals. Inside its right testicle? The lost bullet. This is, of course, medically impossible; but you have to give Capers props for being seriously imaginative.

5. Extended Your Life By Breathing The Exhalations Of Young Women

Johann Heinrich Cohausen was basically a 16th century medical prankster. He's most famous for his last medical work, an extended treatise on the secret of living forever, with the promising title Hermippus redivides (1742). The essence of his "idea"? That everybody could live much longer if they breathed in the breath of young women, which was imbued with "salts" that would lengthen life. "The most expert anatomists," he stated, "know for certain that out of a [young and] sound body, a lively flying salt will be breathed out, and this breath will have a vital strength and balsamic capacity or at the least a powerful mechanical elasticity which communicates vigour, according to the precepts of the philosophers."

He suggested gathering it by use of trumpets and then putting it in bottles to sell as an "elixir." (Inhaling an old woman's breath would, by contrast, make you die faster.) In the last few pages of the treatise, Cohausen reassured his enraptured audience that it was all a hoax — but likely not before a few of them had gathered up young women to breathe on them.

As a "scientific" hoax, this one is more ridiculous than academic, but you have to give Mary Toft credit: she managed to seriously convince the medical establishment of the 18th century that she'd given birth to a litter of rabbits. Toft, a servant, was reported to have delivered various animal parts and nine dead baby rabbits, a case that reached the ears of the King's physicians and caused a national furor.

One physician, Nathaniel St. André, who was subsequently ruined when the truth came out, was convinced the story was accurate, even after Toft's next "babies," "delivered" in his presence, showed no signs of ever being inside a woman's womb. Toft's explanation was that she'd been startled by a rabbit and had then had strange dreams about the animals, which had clearly caused some supernatural invasion of her womb. After an accomplice was revealed trying to sneak a rabbit into her rooms, Toft admitted fraud and went to prison.

7. Some Scientific Journals Will Publish (Literally) Anything

You may not know about this fact if you're not in the scientific field, but scientists need to publish their work in journals in order to develop their careers. Because of this, academic scientists have an increasingly major problem: the existence of journals claiming to be legit that will charge them fees to publish their work (a no-no), and give them a good publications record in return. Even if the work is complete nonsense. A Harvard science journalist, John Bohannon, got fed up with this practice and decided to expose the fee-charging journals as predatory hacks.

Bohannon created a scientific paper that was as daft as it could possibly be without writing it in crayon. It falsified data, didn't support its own conclusions, and invented sources and scientists. "Any reviewer with more than a high-school knowledge of chemistry and the ability to understand a basic data plot should have spotted the paper's short-comings immediately," wrote Bohannon. "Its experiments are so hopelessly flawed that the results are meaningless." He sent minor variations of this paper to 304 fee-charging journals, and to his astonishment and disgust, a full 157 journals accepted it, in a clear sign that it hadn't been peer reviewed by a pet dog, let alone a scientist. Bohannon's article on the experience, "Who's Afraid Of Peer Review", was published in Science in 2013, and became a sensation. It all seems a bit less innocent than the days of poorly constructed skulls in Sussex pits, but hey, hoaxes are hoaxes.