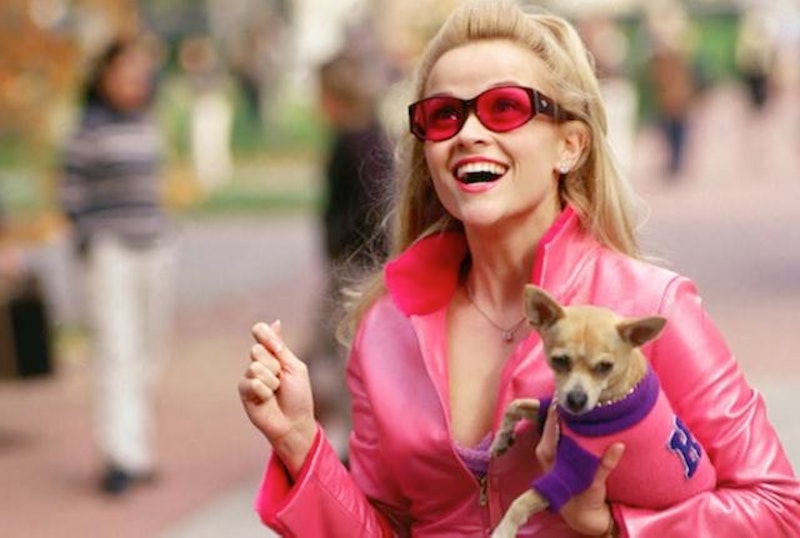 If you were born in the mid-to-late 1980s like I was, Legally Blonde was one of your sleepover movies. I can’t tell you how many times I’ve watched this perfect specimen of a girl-power-romantic comedy, because I really have no idea. If it’s on television, I’m putting it on, even if I’m not watching it — it’s the perfect comforting background noise. Legally Blonde has always been there for me, so I’m surprised to find out how many things I didn’t know about the movie.

Legally Blonde follows Reese Witherspoon’s Elle Woods’ journey from ditzy (but still smart) sorority girl to law student and, eventually, law graduate and kick-ass lawyer. She originally goes to law school so she can win back her long-term boyfriend, Warner Huntington III, who just dumped her in favor of a more “serious” girl (he has political aspirations and needs a “Jackie, not a Marilyn.” OK, buddy). She kicks ass, she upends stereotypes, Warner comes back, and she kicks him to the curb. Oh, and Elle befriends Warner’s fiancée, Vivian, frees a fitness mogul from a murder charge, and wears a lot of pink doing it. It’s truly fantastic. If you’ve seen the movie, you know all of that, though — here are some facts from Legally Blonde that I bet you had no idea about.

1. Reese Kept All The Clothes

Witherspoon had it written into her contract that she got to keep all of the clothing she wears in the film. I’d take that stipulation, for sure.

2. That Toilet Paper Vote Was Real

Screenwriter Karen McCullah Lutz was a sorority sister at James Madison University, and she used to offer her sisters activity points to steal the toilet paper from the administration because theirs was so cheap.

3. Elle Is Kind Of A Genius

4. The Ovester Line Is Real, Too

Legally Blonde writer Amanda Brown attended a meeting when she was at Stanford Law in which a woman admitted she spent three years trying to change “semester” to “ovester.” Brown was the only one that laughed. Oops.

She was in the running to play Warner’s fiancée, but ultimately decided to take a role that shot in Paris instead. Luckily, Selma Blair was there to take the reins.

Sure, Elle won her case and everything, but test audiences really wanted to know what happened after that — so the film’s director had to add a graduation scene to the film to show Elle’s future success.

Davis, who played Warner, had a crush on Witherspoon since he was 15. He told her so during the movie, and the then-married Witherspoon said he was sweet for telling her, but basically, it was time to get back to work.

She spent time with the sorority girls there to get a glimpse on what Elle’s life would really be like. She also sat in on classes at Loyola Law School and watched rich women in Beverly Hills eat lunch and practice retail therapy.

Applegate turned the role down because she didn’t want to play another ditzy blonde — she had just finished her turn as Kelly on Married… With Children and didn’t want to be typecast.

10. Elle’s Name Came From The Magazine

Writer Brown used to read the magazine during her days at Stanford Law, so she used it as her main character’s name as an homage to her own schooling.

11. The Musical Got A Drama Teacher Fired

In 2012, an Ohio drama teacher was fired for putting on a production of the Legally Blonde musical. It made national news, and the school was basically forced to put the show on anyway.

Don’t you just feel as smart as Elle now?