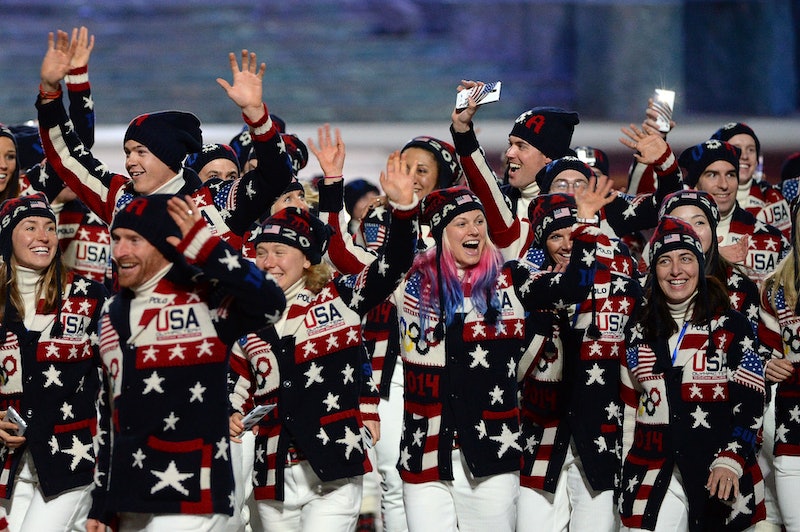 By now you've likely seen Team USA's 2016 Olympics parade costumes designed by Ralph Lauren, and if you haven't, where have you been?! Each year, the garb of participants in the Olympic Games are a hot topic, but you may be wondering when did the Olympics start using costumes? Think of it what you will, but considering that costumes have always been used in the Olympics during my lifetime, I presumed that the parade outfits were as much a part of the Olympics as the actual sporting events. Turns out I was wrong.

The first modern Olympic Games took place in Athens in 1896. According to the Olympics website, news coverage from the first modern Olympics stated, "Men in traditional Greek attire mingled with Europeans in suits." Uniforms of a sort can be seen throughout the photography of this event, with participants such as the Athens 1896 Princeton University team wearing what appears to be all white attire, with sashes sweeping diagonally downwards from one shoulder.

During the 1900 Olympics held in Paris, the French rugby team wore their kit, as did other Olympic athletes taking part in team sports. Although athletes taking part in solo sports wore appropriate sportswear of the time period, looking back through the photo archives of the 1900 Olympic Games, there doesn't appear to be a continuous uniform worn by individual countries. The same seems true of the 1904 Olympic Games at St. Louis.

Lattipongpun wrote an entire section in his paper about the Fourth Olympic Congress in Paris in 1906, and the artistic vision of the Olympic Games’ Opening and Closing Ceremonies. Lattipongpun discussed the minutes of a meeting held on May 23, 1906, "According to the minutes, the meeting attempted to carry out ideas to organize a celebration where sports and art could be combined. A celebration was recommended to be created alongside the sport competitions in which they could be associated with street celebrations, parades, music, and choirs." Lattipongpun later continued, "Parades, costumes, choirs, music, choreography, and decorations were to be used to enrich the ceremonies."

Delving into the archives, it appears that this artistic vision was put into place fairly quickly – a snap of the 1908 London Olympics shows costumed competitors marching past the Royal Box at the opening ceremony. In the same Games, Australasia are pictured in their Olympic uniforms with their sign, for the spectators to clearly see what team they belong to. In addition to this, U.S. athletes wore suits during the Opening Ceremony of the 1908 London Olympics; although this can't technically be classed as an Olympic Costume as we know them today, there's no denying the athletes looked uniform.

Looking through the images taken during the 1912 Stockholm Olympics and beyond into more contemporary territory, it appears in terms of Olympic Costumes, the rest is history. So whether you love them or hate them, you now know how the history of using costumes in the Olympics has unravelled over the years.