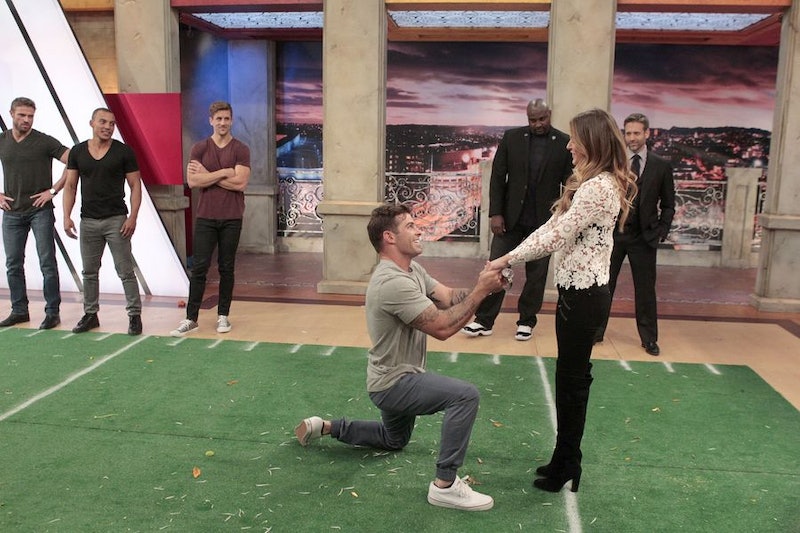 So, I don't know how or when this happened, but somewhere along the line Alex became the villain on JoJo's season of The Bachelorette. Chad finally took a hike, and it seems like Alex has taken his place as the most hated of the bachelors lately. I feel like a lot of this kind of unwarranted. Guys, Alex is not that bad. It all began with Chad accusing him of being "too short" for JoJo and now it's evolved into fans accusing him of being a bully.

Have we all moved on so quickly from the walking mosquito bite that was Chad? Let's not forget who the real villain was, people! Alex may be a little catty at times and, at times, he seems to be overcompensating for his height, but I don't think that's a reason to brand him a bad guy just yet. After all, we have to remember that these guys have not put themselves in an easy position. I don't think anybody is ready to deal with being on a show like this, unless you know exactly what to expect. Of course there is going to be some over-the-top shows of hyper-masculinity and some competition. It's natural to feel like you have to be better than everybody else in a situation where you are trying to come out on top. I'm not saying that the hyper-masculinity is attractive (quite the opposite actually), I'm just saying it's kind of expected at this point on this show.

Honestly, I'm sure that Alex has had to deal with snide comments for a majority of his adult life, and it can't have been better on The Bachelorette. He's not even really that short, but in comparison to the six-foot something dudes that he is competing against here, he looks much shorter. Chad never let him forget that, which put Alex on the defensive for much of the first half of the show. Can we maybe give him a pass now? A lot of the argument for him being a bully has had to do with him seemingly trying to be super manly. While it's definitely not attractive or something that's probably going to win JoJo over, I kind of give him a break on it. We all have something that we are insecure about or that other people constantly point out about us that we are not super comfortable with. I know I have tried to overcompensate for certain things at one time or another.

Taking a look at his Instagram will show you that he's a pretty decent dude. He loves his mom and constantly praises her for raising him and his twin brother alone. If he was such a hyper-masculine bully, I doubt we would see such public shows of respect for the ladies in his life. Editing is a funny thing. I think that now, without Chad, the producers needed to create a bad guy and Alex fit the bill because he is out to prove himself.

Basically, everyone needs to pump the brakes on hating Alex a little bit. I just don't think he's that bad. Now all he has to do is work a little harder to pay more attention to JoJo instead of focusing on his fellow bachelors, and hopefully the audience will give him a break too.