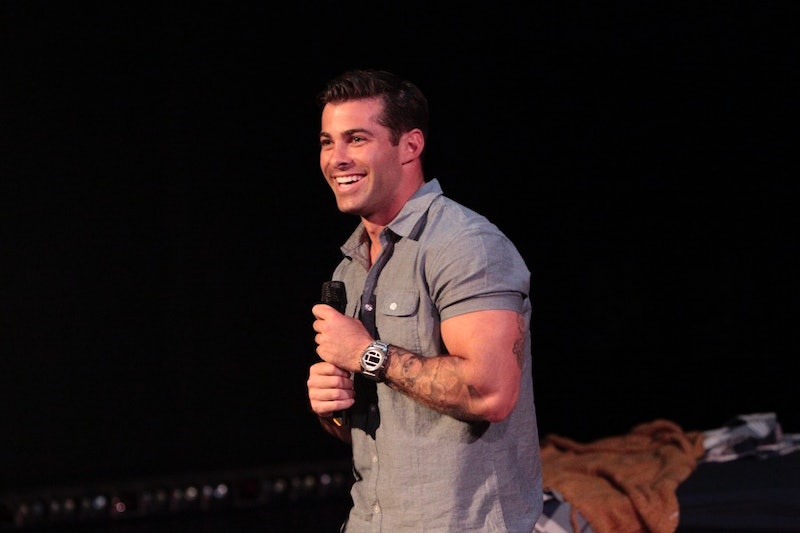 Let it be known that I've disliked Alex from season 12 of The Bachelorette since the very first episode. Whilst yes, he might have the sort of favourable bone structure that makes your heart gasp upon glimpsing his face, but as far as personalities go, the guy has always given off some alarming vibes. From being all too eager to show off his physical prowess on the first night (having JoJo sit on his back whilst doing push-ups — such a turn-off) to the way in which he became almost obsessed with how much he disliked fellow contestant Chad and worked hard to get him eliminated. There's a toxic and passive-aggressive element to the guys nature which is making one fact all the more clear: Alex is acting like a bully on The Bachelorette. It's hard to know exactly why Alex has been acting the way he is, but he's been repeatedly callous, snide, shady and manipulative throughout The Bachelorette so far, with other contestants being targeted by him for little or no reason.

So what's the deal, here? Is Alex simply trying to look tough and macho in front of JoJo? Maybe he's trying to play mind games with the other contestants? Or maybe he's simply just a bully? We may never know for certain but I've got a few theories as to why Alex may have been behaving the way he has been:

1. The Bullied Becomes The Bully

Chad managed to deliver some bruising and distinctly immature attacks on Alex regarding his height, and it'd be easy to understand if this is an issue which has plagued the 5"7 contestant throughout his life. As such, maybe he uses being on the attack as a defence mechanism against bullies.

2. He Likes To Feel In Control

You only need to look at how assertive Alex was in ensuring that Chad be eliminated to see just how much Alex likes to be in control of situations. With him living in such a competitive environment, it's hardly surprising that he's possibly trying to concisely navigate the overall scenario to his advantage by employing some pretty shady tactics.

Surely most truly confident men wouldn't feel the need to invite their date to sit on their backs whilst they do push ups, right? That was a move which desperately reeked of someone demanding validation. And insecurities can make people incredibly passive-aggressive, as a result.

4. He Seems To Think He Needs To Battle The Other Contestants In Order To Win JoJo's Heart

Something tells me that Alex grew up watching a lot of Disney cartoons and has now positioned himself as the heroic Prince out to save Princess JoJo from...I don't know, the romance of other potentially terrific suitors?

5. He Has A Weird Hero Complex

Speaking of which, Alex totally keeps on making the other contestants his business, stepping into situations which don't really involve him. Clearly he seems to think of himself as some sort of Bachelorette hero. Helping to eliminate supposed villain-of-the-season, Chad, was one thing but Alex continued to exude a deluded valiance around the other contestants even after he'd left.

One minute it seems like Alex is the nicest guy ever, and that everyone adores him, but the next he totally switches to become mean, invasive and manipulative. The way he treated Derek after JoJo gave him a rose for "reassurance"? So not cool. If those roses aren't meant to reassure contestants then why even hand some out early? Shut up, Alex.

7. He Seems To Care More About Being A Champion Than He Does About JoJo

Listen, all I'm saying is that we've heard more from Alex in attack of the other contestants than we have of him singing JoJo's praises and revealing his true feelings to her. Out of everyone who is left in the house, Alex is the one who has managed to coast through without really romancing JoJo too much.

8. There's No Chemistry Between Him And JoJo

Seriously, those two are spark free, and maybe he knows that. By being a bully to the other contestants he's able to manipulate situations to his advantage, sure, but it's also probably helping to keep the guy entertained in a contest which (let's be honest) he has little chance of winning.

9. He Sees The Other Contestants As Viable Threats

And can you blame him? The other remaining five contestants currently in the running to win JoJo's heart have all been shown to have some pretty evident chemistry with the woman and are also all incredibly handsome and sweet to top it all off. He's bound to be getting defensive.

For real , Alex revels in it. Whether it's discovering a tabloid interview with JoJo's ex-boyfriend, making a big scene over Chad's exercise techniques or completely losing it when someone else gets a rose whom he thought didn't deserve it (poor Derek), Alex seems to get great enjoyment from creating moments of drama himself.

11. He Seems To Have Confused Being Mean With Being Masculine

Like when he decided to bring up the awkward fact that Wells and JoJo hadn't kissed yet right before their date? So boring. Being mean and tough does not automatically translate into masculinity and it's also not some kind of alluring mating signal for women. Wrong and wrong again, Alex.

12. He's Deflecting Attention From Himself

Seriously, does anyone feel like they know anything about Alex at this point in the game? Because I feel as though all I know about him is that he likes to talk about other people, likes to stir things up and can be super mean for little or no reason. Does Alex even have a personality?

All in all, it seems pretty unlikely that Alex is going to be the one leaving The Bachelorette hand in hand with JoJo, and frankly, I think his time was up a while ago. So, I don't know, maybe Alex would just benefit from kicking back, leaving everyone else alone and just enjoying what little time he may have left on the show.