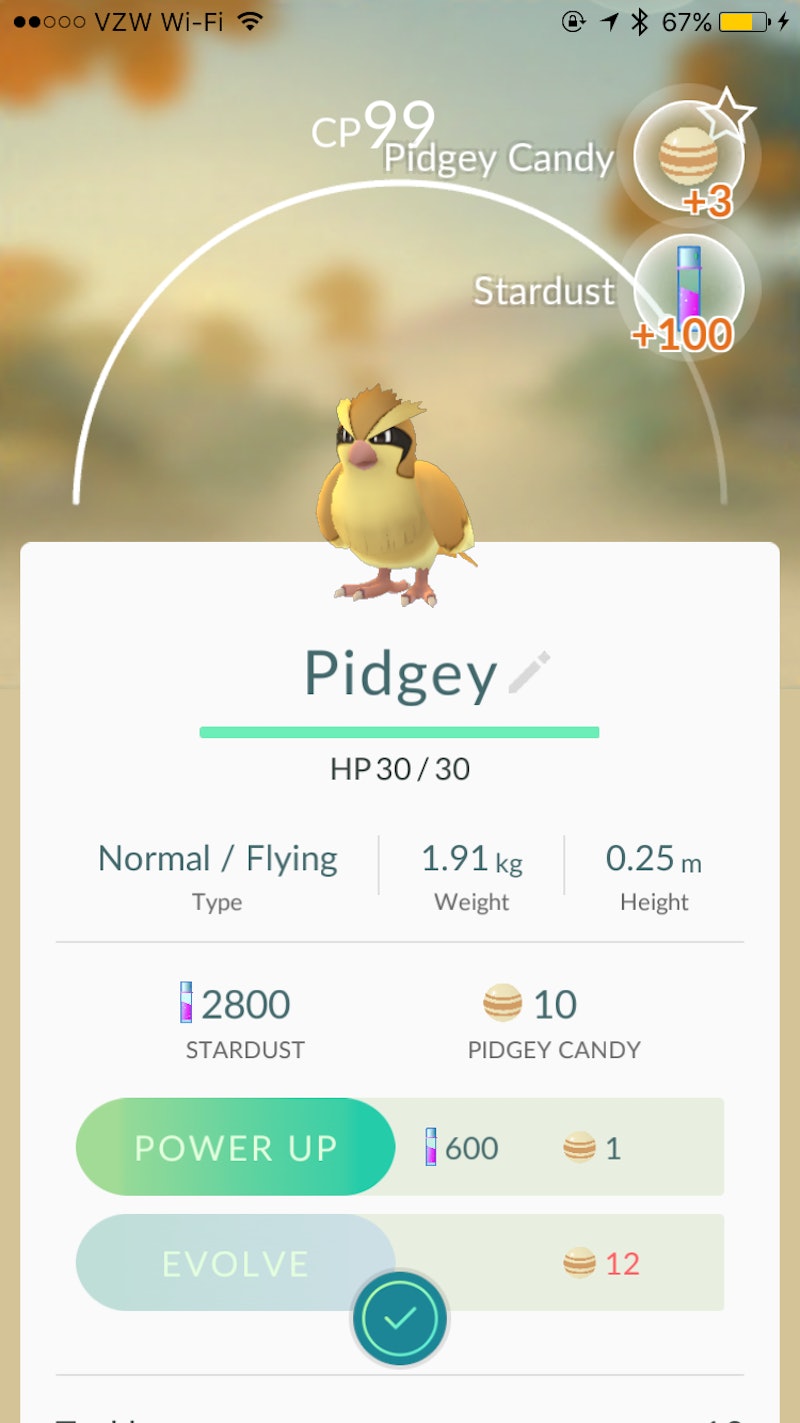 As you probably already know, the world is currently facing a Pokemon epidemic due to the release of "Pokemon Go", the new augmented reality game that has sent everyone from your little sister to Chrissy Teigen on the quest to catch 'em all. The mobile app, which can be downloaded from the Android or iOS store, works by tracking your location so you to find and catch Pokemon based on where you are IRL. It's literally everything 8-year-old you hoped and dreamed about. I mean, come on, if this isn't a sign that we are living in the future, I don't know what is.

Since we can't trade Pokemon yet, we've gotta get crafty when it comes to getting ahold of new Pokemon. Luckily, the app allows you to evolve your Pokemon, which happens to be a great way of obtaining new Pokemon that you may not have already found out in the wild, or, you know, in your backyard. So, if you've caught every Eevee in sight and are now wondering how to evolve one of them into a way cooler Pokémon like Vaporeon or Flareon, you've come to the right place. Follow the steps below to turn your Pokemon into bigger, badder, and better Pokemon.

In order to evolve your Pokémon, you need to have a certain amount of Candy. Each Candy is specific to each type of Pokemon and their evolutions. For instance, if you're trying to evolve a Pidgey, you'll need 12 Pidgey Candy. Once you evolve the Pidgey to a Pidgeotto, however, you will still need Pidgey Candy to evolve the Pidgeotto into a Pidgeot. Each Pokemon also needs a different amount of Candy to evolve. Poliwag only needs 25 Poliwag Candy, but if you're trying to evolve a Magikarp, good luck: you'll need 400 Magikarp Candy.

You obtain this Candy through catching the Pokemon within the evolution line that you're interested in. You can also receive one Candy through transferring these Pokemon, which can be done by selecting the Pokemon you want to transfer and clicking "Transfer" at the bottom of the page. You can find out how much Candy you have by going to any of these Pokemon's individual information pages. It'll say how many Candy you need under the Pokemon's height and weight.

Chances are, if you have enough Candy to evolve a Pokemon, you probably have a ton of the same type of Pokemon to choose from. However, you might want to choose carefully since you'll lose Candy when you evolve one of your Pokemon. A good way to decide which one to evolve is by choosing the strongest one. The more CP, or Combat Power, a Pokemon has, the more likely it is to win a battle. So, even though you may be really attached to the first Venonat you caught that only has 10 CP, it will be wiser to evolve the other Venonat you have that has 219 CP. To select the Pokemon you want, go to all of your Pokemon and tap on the one you want to evolve. This will bring you to their individual information page, where you can evolve them.

Once you have enough Candy and have chosen which exact Pokemon you want to evolve, all you have to do now is click on the button that says "Evolve". If there's a button that says "Evolve," but it won't let you select it, it's probably because you don't have enough Candy. It should say in red how much Candy is needed to evolve your Pokemon. But, if the option isn't available at all, that means that your Pokemon is the last evolution in the line and cannot be evolved into another Pokemon. If the button lets you press it, however, the Candy you saved up will be spent and your Pokemon will turn into the next Pokemon in the evolution line. Now you have a super cool new Pokemon to add to your Pokedex.

Hopefully these tips will aid you on your quest to be the very best, like no one ever was.