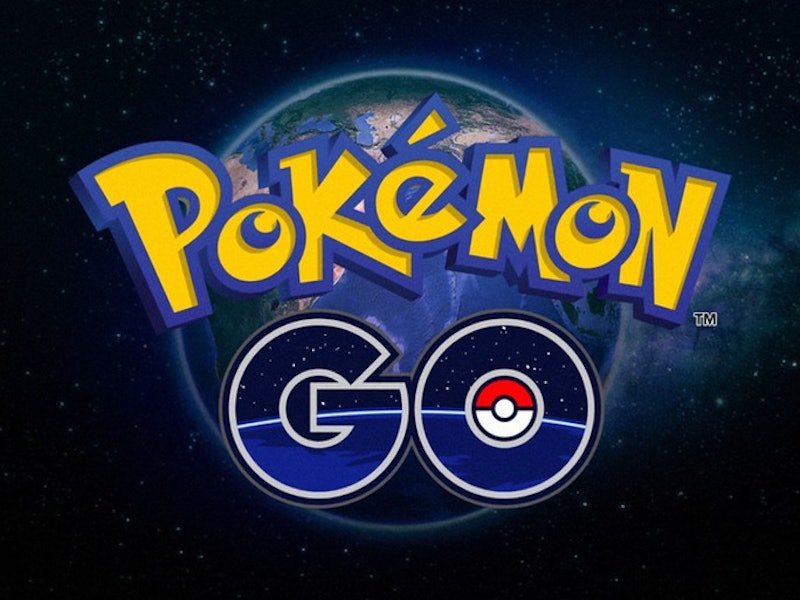 To be fair, I don't totally understand the current obsession with "Pokemon Go"; Pokemon was never really my thing in the first place, so the idea of being able to catch them in the real world just doesn't hit my nostalgia buttons the way it does for a lot of other people. But the operating concept behind "Pokemon Go" — augmented reality technology — is for sure something I can get behind. So, here are some more apps like "Pokemon Go" that, um, are not "Pokemon Go." Just, you know, in case you are like me, or if you've already caught all the Pokemon (is that how that app works?), or whatever. Your worlds are about to explode with both weirdness and awesomeness, guys. Get ready.

I first heard about augmented reality several years ago while attending a "gameification" conference — and yes, that is an actual term. Gameification, per its name, strives to make educational opportunities into games and fun, madcap adventures. It takes the idea that education can introduce you to new worlds, and runs with it. And one of those ways was to pair up with different companies and utilize all the smart technology we have at our fingertips these days — smartphones, tablets, you name it — as "portals." The result is something that combines both the real world and the kinds of technology you see in a video game in some really exciting ways. When you are out hunting for Pokemon, for example, those little Pikachus and Charmanders aren't actually there. But look utilize your phone's camera and look at the device's screen, and presto! There they are, layered on top of the view of your couch or the park you're sitting in or whatever.

These apps operate on similar concepts — either encouraging you to adventure throughout the world to hit different locations, collecting things ranging from animals to stories at each location, or seeing the world through an additional, filter. An awesome one. Because augmented reality? It's pretty cool, you guys. Just saying.

Was it cruel of me to make the very first app on this list one that is not yet available to the public? Yes, probably. But if you contributed to their IndieGoGo, you're guaranteed a copy of the app once it's released. Like horror films? Then you'll love this. It turns your house into a haunted death trap and will probably take five to 10 years off my life.

Indulge your inner cat lady with Neko Atsume, whose entire premise is... get cats. Get cats to come to your yard. Entice cats with treats and toys. Collect photos of cats in your photo album. Win by getting all the cats. Sounds slow, but I have it on good authority from several friends that this game is dangerously addicting. Strcitly speaking, this one isn't augmented reality; however I've no doubt the collection aspect of the whole thing will appeal deeply to Pokemon fans.

Holy cow, you guys — this sounds so cool. As a bookseller I should probably be more offended at the concept of a "digital novel" that you can experience through your phone screen, but all I can say is, "Wow." Here's the basic premise: Generations of kids are being born with Silence, but a teacher discovers that their lack of words belies special powers. To gain access to The Field Reports, you have to be in the physical place they occurred — all throughout your city. So basically, you run around your town, unlocking bits of the story as you go.

So, OK, yes, you have to acquire the specific Crayola Color Alive coloring sheets for this one to work its magic. But once you download those from the Crayola app and get to coloring, you will be very willing to accommodate that extra step. Hold your phone over the coloring page, and you'll see a three-dimensional, moving, antics-having version of the 2D image you just colored.

When I took Astronomy in college, it was because I wanted to be "the cool girl who knows the stars" at parties. Turns out, college-level Astronomy is all physics and I really should have just downloaded the Star Walk app instead. Point your phone at the night sky, and this app will map out the constellations and celestial bodies in real time.

The same humans who created "Pokemon Go" (that is, Niantic) created Ingress, so you know it's going to be good. Here's the story you'll jump into if you play it: Top scientists have discovered a new energy source, and some think it's controlling the way we think. You'll have to join either "The Enlightened" (pro mysterious energy power) or "The Resistance" (anti- being controlled by mystery power). Capture territory, discover weapons, and fight the good fight — whatever you decide that is, anyway.

On the surface, this sounds like my nightmare: A fitness app that makes me think zombies are chasing me? No, thank you. I'll stick to my elliptical and One Tree Hill episodes at the gym. But it still sounds pretty neat — each time you go running, it's an "audio adventure." You embark on missions set to kickass tunes, protecting the world from zombies, being a hero, and getting fit, all at once. Hi, hello, what else is there?

As someone who likes to take big, meandering walks, this app sounds to me like the perfect tool for discovering some summer adventures. Field Trip runs in the background of your phone and alerts you when you've come across something weird or cool or obscure. Then it tells you about it, and then lets you explore for yourself. I can dig it.

You know how in spy movies, they show stuff from the spy's point of view, and it's always, like, calculating the position of the sun and identifying targets and stuff? Now that can be you, but with your phone instead of your eyes (heh, get it?).

Yes, yes — two zombie apps in one article? I don't know what to tell you, except that augmented reality experienced a huge boom around 2012 to 2013, when vampires were out and witches were still on the rise. Granted, this particular app — which functions in the same way that the "Pokemon Go" app does, except instead of collecting cute Pokemon, you have to kill zombies — may inspire some paranoia in you, but come on. That was probably already there to begin with, right?