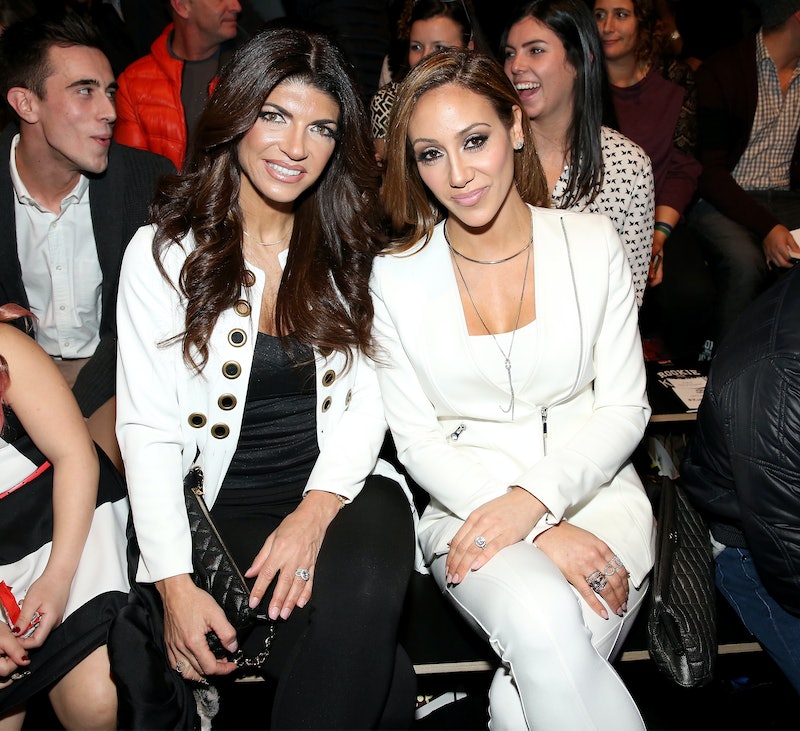 I feel like all is right in the world now that Real Housewives of New Jersey is back on TV. It has been way too long since Teresa Giudice and the rest of the ladies have been in my life (via television obviously). I totally agree that the long hiatus was necessary since there is no way that the show would be good at all while Teresa was away in prison. But so much time has passed since Season 6 and and as Melissa Gorga said "things are changing in Jersey." So much was revealed in the first episode. Us fans learned a lot from watching the Real Housewives of New Jersey Season 7 premiere.

Melissa, Jacqueline Laurita, and Teresa (obviously) have had so many life changes since fans last saw them on TV, and we were also introduced to the two new Real Housewives during the premiere, Dolores Cantania and Siggy Flicker. So, there was a lot of new info coming our way. Nevertheless, I still wanted more since the real good part, Teresa's return home, didn't happen until the very of the episode.

Just in case you are still reeling from the emotions of the first episode (I so get that) and you can't totally remember everything we found out, here is a helpful recap.

Even though Teresa and Melissa are currently best friends, they did not bond through some sort of correspondence while Teresa was away. Melissa revealed that they had not been in touch at all.

2. Teresa Wrote Notes To Melissa & Jacqueline While She Was In Prison

Even though there was no back and forth conversation between Teresa and Melissa, Teresa's lawyer did send Melissa and Jacqueline photographs of brief handwritten notes that Teresa wrote while she was in prison. And of course, Teresa mentioned bringing some sprinkle cookies to the Christmas Eve party that Melissa was having.

Jacqueline revealed that her family is having financial problems and that they will be moving to downsize. Her husband also shared that they sold jewelry and other possessions and that they were not giving each other Christmas gifts.

Why wasn't Dolores a Housewife sooner? She has known the original RHONJ cast members for decades. The real shocking part is that she has remained friends with all of them even though they are not all on good terms with each other.

5. Ashlee Moved Back Home With Jacqueline

Jacqueline's daughter Ashlee is now a makeup artist who moved back home to save money. It also seems like she and her mother are getting along a lot better than they did during the early years of the show. Thank God.

6. Melissa Is Opening A Retail Store

Melissa revealed that she has a new desire to be a working woman and do more in her life aside from taking care of her family and star on the show. She was working on starting her own clothing boutique during the premiere episode.

Dolores recently got out of a relationship so I'm sure that this season will show her attempts to get back into the dating scene. Cue the awkward setups courtesy of her fellow cast members.

Joe Gorga has always been his wife's biggest supporter, but he did not end up investing in her store since he felt like retail is not a reliable business option. (This is the same man who invested in Melissa's singing career, but whatever.) Melissa did end up hiring him (with her own money) to help build the store, so now she's his boss on the project.

9. Siggy Got A Face Lift

What an entrance! Siggy joined the show with her face wrapped up in bandages and she sipped lobster bisque through a straw. It was amazing.

Dolores has two kids who are teenagers, so I'm curious to see if their lives will be shown a lot as a part of her story line this season.

11. The Giudices Had The Best Reaction To Having Teresa Back

Joe was more than relieved to have his wife back. The single parent life clearly didn't agree with him. He said he felt like he was married to four women who were trying to boss him around all the time.

It's only the beginning, but I definitely think that this season of RHONJ started off on the right note, and I'm pumped to see what happens next.