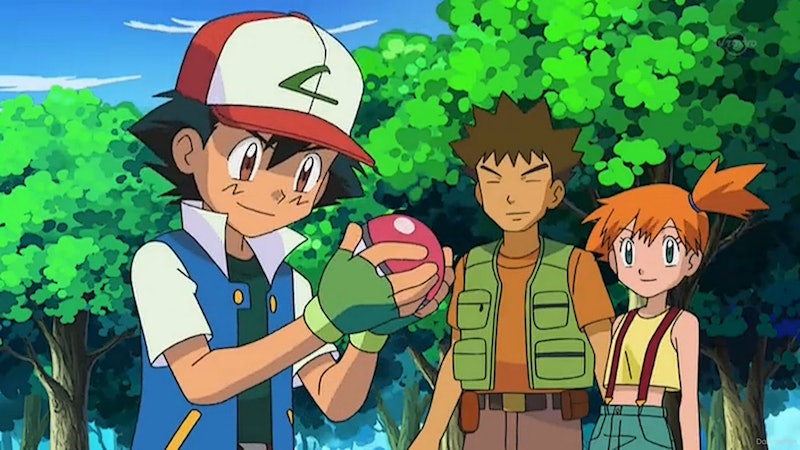 In a development that's surprised even me, an ardent Pokemon fan, the new Niantic, Inc. augmented reality app called "Pokemon Go" has become one of the most popular games ever — in just a few days. I have surrendered to the call of my childhood fantasies and have been out there with everyone else, roaming the streets to find a Jigglypuff or an Eevee (although I mostly just find Pidgeys and... Pidgeys). But, even though I love seeing the way the app is playing out in real life, I've noticed that there are ways "Pokemon Go" is different from the original Pokemon games.

This is to be expected — a free-to-play mobile app with thousands of users playing at the same time has different freedoms and limitations than a Game Boy title like Pokemon Red or Blue. But some of the basic gameplay mechanics from the well-beloved originals don't feature in "Pokemon GO" at all. You may have heard that the Niantic, Inc. CEO, John Hanke, said that trading would be coming to "Pokemon Go" as an update. That adds in one of the most notable features from the Game Boy games. But there are certain core parts missing from "Pokemon Go" — and there are things it adds in that the originals never had in the first place. Let's take a look.

One of the most important parts of the original Pokemon games was finding wild Pokemon, battling them with your own team to get the other Pokemon's health down, and finally capturing it after you'd lowered its defenses far enough. In Pokemon GO, all you have to do to catch a wild Pokemon is flick a Pokeball at it with your finger. There's no battle aspect, which takes away the feeling of having worked hard to capture a Lapras or a Jinx. Sure, some Pokémon are more apt to break out of Pokeballs, but that's the case in the originals, too.

2. You Don't Level Your Team Up Through Fighting

When I was a wee little lass, I spent many, many hours fighting other Pokemon Trainers to hone my team's skills before confronting the Elite Four (pictured above) with my badassery. Every time a specific Pokemon defeated an opponent, it would gain experience and eventually level up. In Pokemon GO, your Pokemon don't really level up — you do. You can grab XP by catching Pokemon, adding new Pokemon to your Pokedex, and finding Pokestops. You can also do battle at gyms for small XP boosts, but again, you're the one reaping the benefits.

3. You Evolve Pokemon by Catching More

I was always overjoyed when my starter Pokemon hit levels 16 and 36, because that meant it was going to evolve. At level 16, Charmander would evolve into Charmeleon, which would eventually transform into Charizard. (And if you didn't pick Charmander as your starter, you were probably doing it all wrong... but that's a topic for another day.) In "Pokemon Go," that's not how it works. Every time you catch a Pokemon, you receive three Candy that are specific to that Pokemon evolution chain. For example, to level up my Krabby, Bertha (I had originally named her Patty but then decided that was too mean), I'd have to catch enough Krabbys to have 50 Krabby Candy.

4. You Challenge Other Players at Gyms

In the original games, you'd trek from town to town, racking up Gym badges by defeating nine set Gym Leaders. You couldn't change these Gym Leaders' identity; that was already programmed into the game. In "Pokemon Go," Gyms exist, but they're held by one of three teams (Red, Blue, or Yellow). They change hands constantly as thousands of Pokemon Trainers battle it out on the reg.

See that red thing in the distance with a Vaporeon on top? That's a Gym.

In Red, Blue, and Yellow, you'd often come across items that allowed you to teach your Pokemon more powerful moves. Also, when your Pokemon would reach certain levels, they'd learn new moves that would replace one of their four weaker ones. That's not the case in "Pokemon Go." Each Pokemon knows two moves: one normal attack and one special attack. No matter how much you power up your Pokemon, they won't learn new moves.

My Scyther, Myrna (I name all my Pokemon old people names, OK) knows Steel Wing and X-Scissor, and that's all it'll ever know.

In pretty much every other Pokemon game, it's you against Team Rocket, a group that is pure evil and constantly screws up world order and peace for its personal gain. In "Pokemon Go," though, you yourself can join a team — and Team Rocket isn't one of the options. (Who would join them, anyway?) Instead, you choose between Red (Valor), Yellow (Instinct), and Blue (Mystic). Each team is led by a different character, but it doesn't really matter which team you join. You don't get any bonuses for picking one team over another. The biggest implications are real-world ones: my entire extended family has joined Team Mystic, but bae joined Team Valor, putting me in an awkward situation.

More like this
19 Games Like Wordle To Play Online
By Kaitlyn Wylde and Emma Carey
How to Delete (or Pause) Your Hinge Account
By Emma Carey
How To Protect Your Digital Privacy If You Need An Abortion Post-Roe
By Kaitlyn Wylde
What Is A “Softboy?” The TikTok Term & Aesthetic, Explained
By Courtney Young
Get Even More From Bustle — Sign Up For The Newsletter