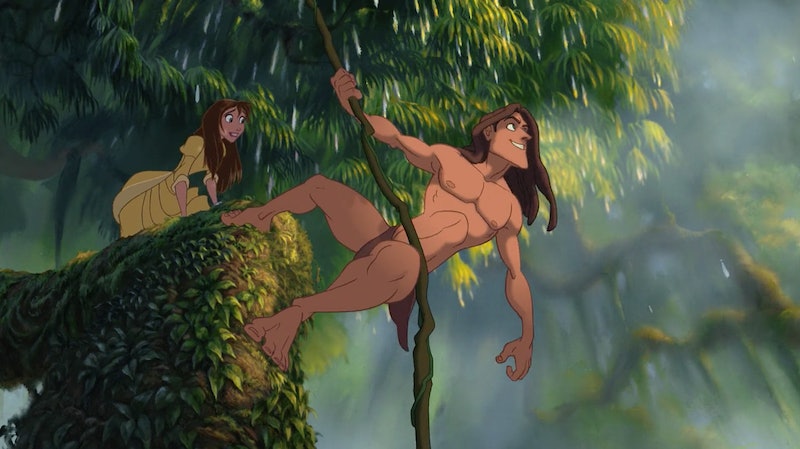 When Disney's Tarzan premiered in the summer of 1999, it was well-received by critics and did well at the box office, yet despite its success, the film seems lost in the pantheon of '90s-era Disney Renaissance animated films. When thinking of the classics of the decade, movies like Beauty and the Beast, Aladdin, and The Lion King are the ones most likely to stick in people's memories, not Tarzan. Perhaps it's because the first wave of Pixar films like Toy Story and A Bug's Life overshadowed the classically animated musical, or maybe there were just too many great Disney flicks in the '90s to remember them all. Whatever the reason Tarzan has been all but forgotten throughout the years, which is quite a shame, because in my eyes, there are an infinite number of reasons why Tarzan is the Disney classic you should totally revisit today.

You know the story: Based on books by Edgar Rice Burroughs, Tarzan tells the legendary tale of a human boy raised by apes and the jungle man he grows up to become. Sexy Tarzan is voiced by Tony Goldwyn, who everyone now knows as President Fitzgerald Grant on Scandal. The character is living happily with his animal friends and family until one day he's discovered by Jane Porter (a hilarious Minnie Driver), and her father (Nigel Hawthorne) who are on a mission to find gorillas in the African jungle. The bad guy who accompanies them for the ride, however, threatens the gorillas with captivity, and fights ensue. In the course of the action, Tarzan and Jane naturally fall in love, and in that aspect, the movie isn't so different from its animated peers. But a couple of things make Tarzan stand out from the rest of the '90s Disney pack for the better.

For one thing, Tarzan approached its musical numbers in a different way than its predecessors. Instead of having its characters sing the film's catchy tunes, Disney relied on English singer Phil Collins to both write and perform the musical numbers of the movie. The songs' lyrics lovingly comment on the action of the film, but being sung by someone outside of the action gives Tarzan a sort of omnipotent narrator character. It's much different than seeing Aladdin or Belle suddenly burst into song, and it drives the film in a more realistic way. Plus, who can resist the sweet, sweet stylings of Collins? No one, I bet.

Animation-wise, Tarzan also tried out new ways of presenting its environment. As Tarzan animator Glen Keane told Indiewire in 2015, he was actually inspired by a very '90s phenomenon: skateboarding. "I was looking at other Tarzan videos and old movies and him swinging on the vine and I tried that, animating Tarzan swinging on a vine and it just looked boring, very passive," Keane said. "You’re not doing anything, you’re just hanging onto a rope. But every night I’d come home, there’d be [my son] Max with his bloody knees and he was skateboarding...and he was watching all these extreme sports." Keane traveled to Africa, where he learned that the moss that lines the trees in that specific jungle was rather slippery, and an idea popped into his head. Said the animator, "Burroughs describes a Tarzan that is like a wild man, just leaping from branches and described somebody that the adrenaline had to be pumping through this guy, and I thought, he’s an extreme sports guy. What if he’s a tree surfer instead of swinging on the vines?" Using Keane's idea and Disney's famed CAPS system, the new Tarzan was fast, slick, and modern, and the surrounding environment even more detailed.

Disney's Tarzan's embrace of new ways of thinking when it came to animation and when it came to music make it stand out from the rest. It's proof that sometimes, if filmmakers choose not to settle into their ways but instead look to push new boundaries when it comes to animation, storytelling, music, and film, it can lead to massive innovation and success. Tarzan may not be remembered as one of the beloved animated films of the Disney Renaissance, but it truly was groundbreaking, and these days, especially with Legend of Tarzan in theaters, this great Disney version of Tarzan is ripe for a revisit.