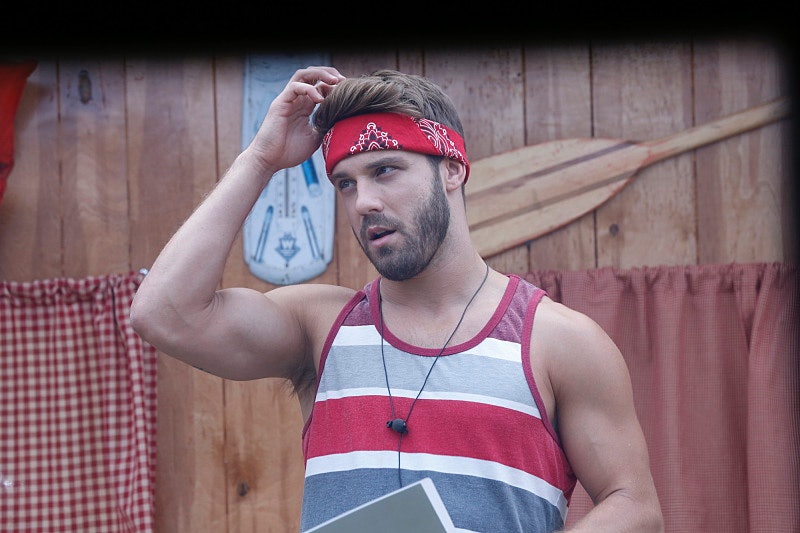 Alliances are everything in Big Brother: If you don't have a group of people by your side, you're as good as evicted. It seemed like the powerful 8-Pack alliance was set to dominate BB18, until in-fighting has left the members to choose between the feuding Frank and Tiffany. However, one member of the 8-pack seems to be at a point of limbo... primarily because he only recently became a member of the 8-pack. What Is Paulie's relationship with the 8-pack, and how is it affecting his gameplay?

Paulie has managed to be a go-get-'em player while still laying relatively low, which is especially impressive since in the first two weeks of the game he was on the block for eviction, and then immediately after that became Head of Household. Paulie's been working with various members of the powerful house-ruling alliance since week one when he agreed to go up as a pawn, but he was only recently offered a spot in the alliance (which is still the 8-pack, even though it should technically be the 9-pack.) With so many people in the alliance and a split dividing the once-powerful crew, where do Paulie's allegiances fall? This 8-pack could be turning into a fierce foursome.

Paulie's top allegiance in the house is fellow 8-packer Zakiyah, as the two have been forming a strong showmance that could prove to be incredibly powerful as the season goes on. Paulie and Zakiyah are two smart, yet understated players who are both focusing on not pulling attention to themselves and turning people's attention to larger targets. If these two are half as good at playing Big Brother as they are at understanding each other, then they should have no problems making it to the jury at the very least.

Those two on their own would likely be very powerful, but Paulie and Zakiyah have been pairing up with another showmance to gain numbers and favor. Paulie & Zakiyah have grown close with the less-serious showmance of Corey & Nicole, with Nicole even stating that she would like to see a final four between the two showmances. While the 8-pack is on the verge of breaking apart, these four have determined who they like working with out of the larger group and are sticking together to stay out of the Frank Vs. Tiffany narrative that has swallowed the 8-pack whole.

The great irony in all this is that Nicole was an enemy of Paulie's brother Cody during BB16. However, in the Big Brother game, there is no room for grudges. The alliance of power couples Nicorey and Pauliyah, or Corcole and Zakilie (these two couple are not well-suited for couple names), is big news for the 8-pack. While all the members are still openly involved in what is left of the 8-pack, they have much bigger plans on their mind including getting rid of Frank.

Paulie's game has already been through some wild twists and turns in only a few weeks time, but he's handling the shifting game like a champ. If he can continue to maintain his composure and align himself with strong, intelligent players, Paulie could end up winning the very prize that so narrowly eluded his brother.