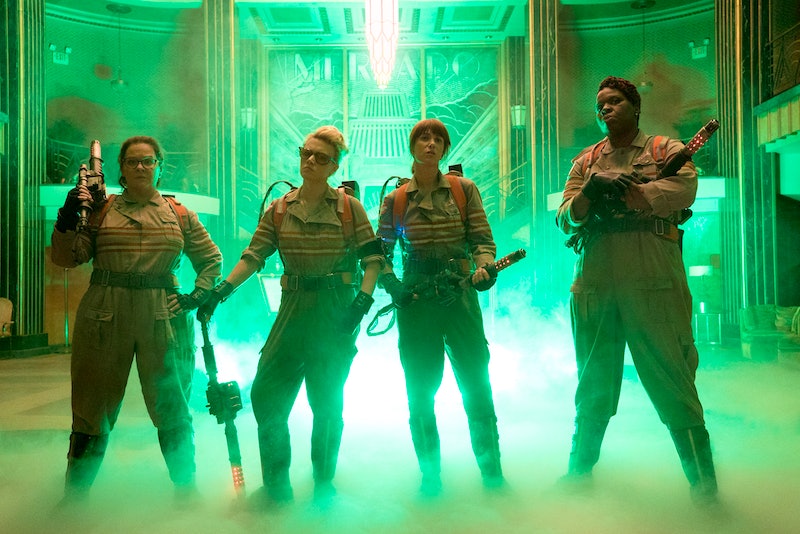 Despite being told my opinions were laughable or filled with a bunch of feminist "buzzwords" following a screening of the new Ghostbusters, no one can — as the great Len once said — steal my sunshine. Katie Dippold and Paul Feig's new Ghostbusters movie was everything I wanted. That won't stop the internet from trying to mar this movie, though. The naysaying that plagued the film throughout its entire production cycle was a drain, and the haters have now been bolstered by a few negative reviews. The funny thing, though? Dippold and Feig's film clearly doesn't care what anyone thinks. In fact, the entire production is a middle finger waving at its detractors. And it's glorious.

Of course, the hope was that the film wouldn't just blow haters out of the water — it will might actually change some perspectives. That's what Feig said he wanted to happen when I spoke to him on the film's set in September.

"You always want to change minds," he told reporters. "There are people who have this really condescending image of A) What I would do with it and B) What you would expect women to do in a movie. I’d like to definitely prove them wrong, but beyond that you just need to be true to [the original]."

I'd argue that the film did just that, while still giving something new to both existing Ghostbusters fans and those viewers experiencing ectoplasm and ghost extermination for the first time.

Still, I'll be honest: There are a few tiny parts of the movie that read a little too cheesy for my taste, and the abundance of nods to the original film felt somewhat like it was seeking a stamp of approval that I, as a woman who's championed this film from its infancy, never really needed. But I never asked for a perfect film, just really, really fun one. (After all, isn't the entire reason we all adored the original was because it was fun?) And throughout this new iteration, I was laughing my ass off, exhilarated throughout the fight scenes, and — on occasion — afraid of those ghosts. But beyond all that, I felt vindicated after having watched vicious YouTube commentary being flung at the film for months.

Those critiques clearly worked their way into the fabric of the film, evidenced by moments like one in which Melissa McCarthy's Abby reads a comment on her character's ghost video on YouTube ("Ain't no b*tches gonna hunt no ghosts") or when she laments that "It's really easy to be a naysayer when you're not doing anything." And while those times when the cast very nearly reaches right through that fourth wall and bops the YouTube bullies on the head are cute, they aren't what truly what seal the deal.

There's the fact that not a single character in the film exists for any semblance of the male gaze (there goes that buzzword, a.k.a. a very real issue in the landscape of film). There's the incredibly heavy use of scientific method as a plot device (yeah, ladies love science too). There's the fact that these women weren't in competition in any sense of the word. And finally, there are scenes in which four people who just so happen to possess vaginas take down a horde of bloodthirsty ghosts like the heroes we deserve. These are the true victories. As Dippold told reporters when I visited the set of the film in September, "It’s just four scientists who are obsessed with ghosts and they’re going to go on this adventure and that’s it."

And you know what, finally seeing a movie like this feels good.

I can attest that I've never seen a summer blockbuster that treats female characters the way Ghostbusters does — that is to say, without letting gender be these characters' defining features or stereotypes about their gender be the plot's guiding light. As someone, like many young women, who grew up wanting to be the hero (see: Venkman in the original Ghostbusters), rather than the woman who eventually acquiesces to be with the hero after something dramatic happens (see: Dana in the original Ghostbusters), watching four female friends solve scientific problems, outsmart a ghost villain, and take down ghost minions with the weapons they built themselves (see: Kate McKinnon as chief gadget maker in a career-making, amazingly bananas performance) could be nothing but a perfect "screw you" to the people who never wanted this movie to be a thing.

And, if after all that, the worried parties lurking in comment sections and reddit threads all over the world still hate the movie, Feig offers this: "I’m not going to erase the copies of the old Ghostbusters movies, they exist." There you go, guys. All better.