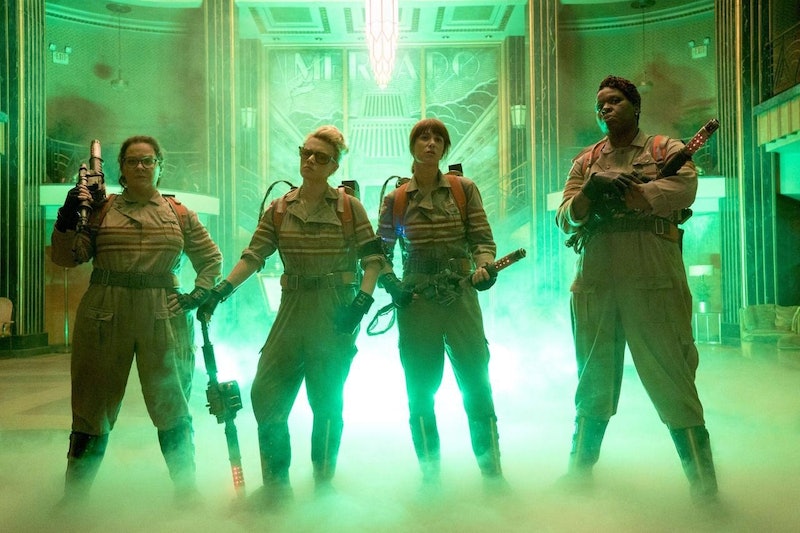 The Ghostbusters reboot doesn't hit theaters until July, but it's been a topic of heated discussion ever since rumblings of it happening began floating around the Internet. Namely, because of the — wait for it! — all-female cast. When that first trailer debuted on YouTube back in March, citizens of the world began voicing their divisive opinions about said cast. It seemed that you were either totally on board with an all-female Ghostbusters remake (because why wouldn't you be? Sounds dope!), or you were adamantly against one. And by adamantly, I mean adamantly. Which is sad, because much of that vitriol is totally rooted in sexism, and it also partially explains why the Ghostbusters reboot trailer is apparently the most disliked movie trailer on YouTube right now.

By some product of absolute ridiculousness, people were upset to learn that the remake of beloved film about men being summoned to bust ghosts will actually be about women... being summoned to bust ghosts. How is that possible?! It's so unfair! Woman can't operate a proton pack! They can barely figure out how to operate a remote! They are probably aliens! But, plot twist: What if woman can? What if woman are like — I don't know — "equal" to men or something? What if this Ghostbusters remake actually turns out to be a good film, despite all the negativity? Despite all these "dislikes"?

But, does one trust the metrics of a YouTube trailer? If the proportion of "dislikes" to "likes" is this high, will it affect who goes to see this movie? If so — and if the movie doesn't make as much money as the studio would have hoped — does the possibility for more female-led reboots become smaller? Possibly. If you want to talk about things being unfair, let's start there.

A percentage of viewers who are avidly against the reboot will claim their issues with the film have nothing to do with sexism — and I'm not saying that's impossible. You're allowed to be unenthused by a trailer, and not have your aversions be rooted in misogyny. To say that everyone who pushed that dislike button solely because their eyes were burned by seeing female persons instead of male persons on their computer screens would be an unfair generalization. But much (and I mean much, if you don't believe me just look at the comments under the trailer) of the backlash has to do with the cast being female.

All I'm saying is that if you were on the fence about this movie and have been put off by all the hate it's received online, don't let those 552,000 (and counting!) dislikes sway you. You'll never find out if you like a movie — or even if it's a good or bad one — just by watching the trailer anyway.