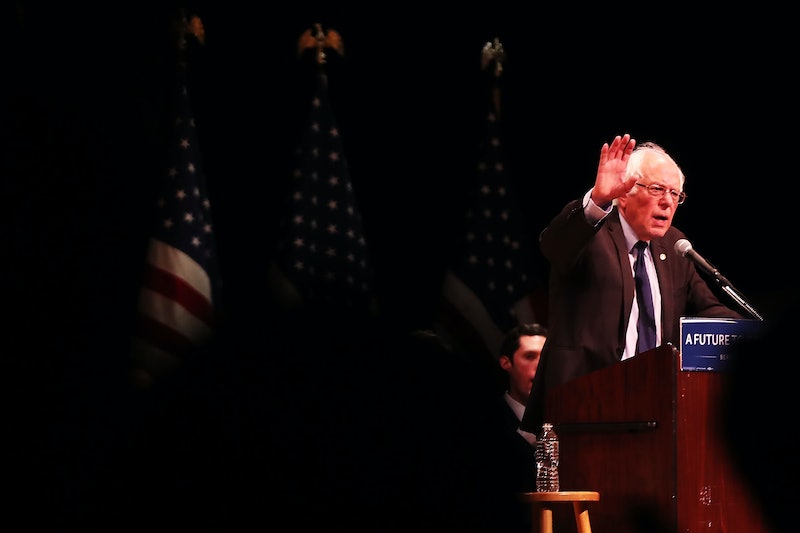 Nearly a month after the party's last primary, Bernie Sanders endorsed Hillary Clinton for president on Tuesday at a rally in Portsmouth, New Hampshire. Before a cheering crowd, he declared, "Secretary Clinton has won the Democratic nominating process, and I congratulate her for that. She will be the Democratic nominee for president, and I intend to do everything I can to make certain she will be the next president of the United States." His speech ended speculation about when ( or even if) he would throw his weight behind his rival. Sanders’ speech showed that he was as fired up as ever, as he railed against the Donald Trump and the Republicans and praised Clinton on a number of issues.

But one thing was missing: Sanders didn’t officially say he was dropping out.

We’re used to hearing the line — mostly from Republicans in this particular election — “I am suspending my campaign” when a candidate reaches the end of their yellow brick road. But Sanders said no such thing, leaving some uncertainty as to the state of his campaign, or how it will interact with the Clinton campaign for the remainder of the election.

Though there’s some disagreement as to whether there’s any nuanced difference between “suspending” a campaign and simply quitting, and how much the Federal Election Commission cares, Sanders only spoke about the strengths of his campaign in his lengthy statement.

And while some news outlets have inferred his campaign’s end, it seems to me that this omission allows him to keep his promise to his followers that he would take his campaign all the way to Philadelphia.