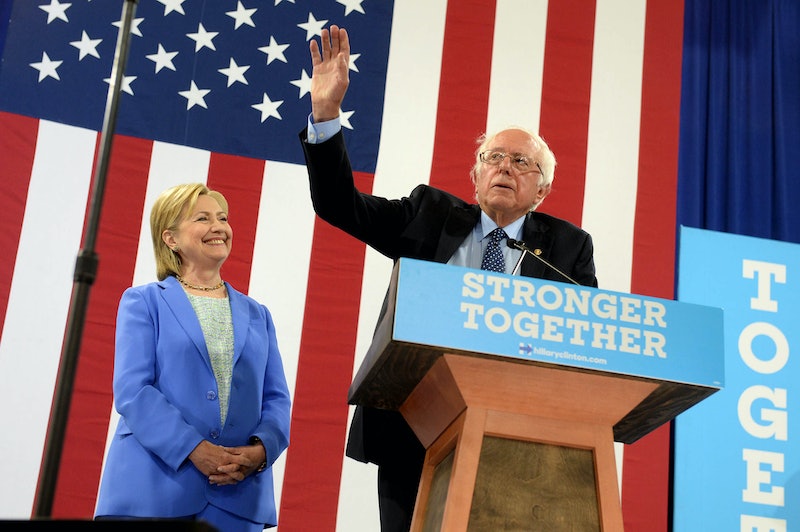 On Tuesday in Porstmouth, New Hampshire, Sen. Bernie Sanders finally, officially, without contingency or ambiguity, endorsed presumptive Democratic nominee Hillary Clinton for president. And for Team Clinton, the skies opened up and it was a bright new day in a campaign that has seen its fair share of criticism and backlash. While Sanders gave an impassioned speech, with Clinton behind him nodding and clapping, there was something missing. While he discussed party unity a good deal, to many, the speech seemed more anti-Trump than pro-Clinton. Now the question becomes whether this will be enough to bring the hardcore Berners to the Clinton campaign.

It was a funny thing to watch Sanders give his endorsement to Clinton. Every time he said "Hillary Clinton" you could have easily substituted "Bernie Sanders." We know that their policies and ideologies are not 100 percent aligned (as he noted), and that is part of the reason Sanders did not endorse Clinton sooner. A lot of points he made, such as in regards to climate change, the minimum wage, and student loan debt, are issues the two have agreed upon in the past to some degree. So he wasn't putting forth anything particularly new or exciting to swing his hardcore supporters to Camp Clinton.

There was no mention of campaign finance reform (although in her speech following Sanders's, Clinton did promise to make the issue a priority), political corruption, banks, or any number of other hard lines he drew during the primaries. Instead of Sanders' aggressive progressive ideas, he brought up mellowed concessions.

Before the endorsement, Clinton was on somewhat uncertain ground with Sanders supporters. A Pew Research poll conducted in June showed that 85 percent of Sanders supporters would back Clinton. But compare that with a GenForward poll from the roughly that same period. While it only surveyed Americans ages 18 to 30, which is a big difference, it found that only half of the Sanders supporters from the primaries were prepared to say that they'd back Clinton over Trump in the general election. So while Clinton may have a grip on the overall trove of Sanders supporters, she seems to still be facing a bit of a struggle with the younger population.

Sanders stood in front of an energized crowd in New Hampshire and said, "Our job now is to see that platform implemented by a Democratic Senate, a Democratic House, and a Hillary Clinton president — and I am going to do everything I can to make that happen." Is this enough to woo the Sanders supporters Clinton has been coveting for months? Is Sanders's word enough, especially if there is talk that Sanders is "selling out," as Donald Trump accused him of in a tweet?

In an election in which the two presumptive major candidates face historically low approval numbers, could a third-party candidate steal enough votes away from Clinton to put Trump in the White House? Although many are still predicting a win from Clinton come November, the truth is that she needs all the support she can get — even if it's a bit lackluster.