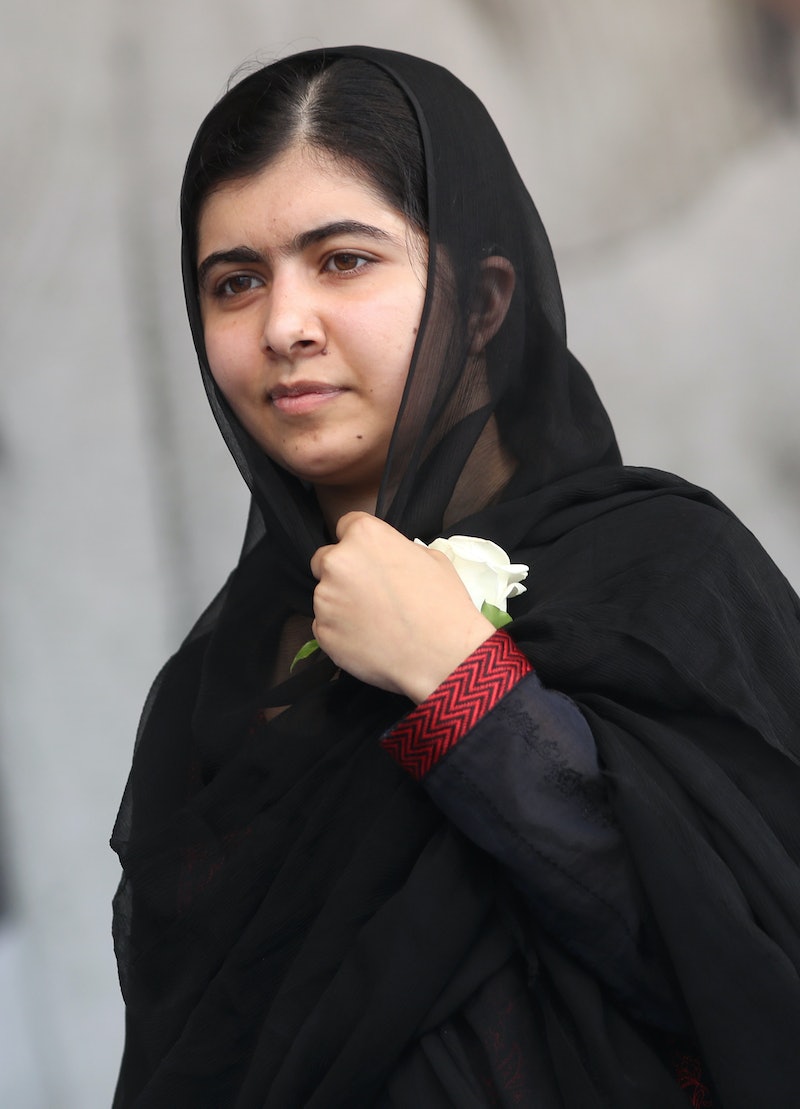 Any discussion of women's rights today will invariably turn to the Middle East, where, many people erroneously assume, women live as docile bodies, brainwashed by harsh governments. Because Western feminists would do well to listen to Middle Eastern activists on these issues, I've got 12 Malala Yousafzai quotes to drive your feminism and inspire your activism.

Reading off a list of Malala's accomplishments sounds a lot like announcing Daenerys Targaryen: Malala Yousafzai, first of her name, the pride of Pakistan, the youngest Nobel Peace Prize awardee, the champion of girls' education... I could go on.

Malala's rise to prominence began in 2008, when the then-11-year-old gave a speech in Peshawar on women's education. At the time, Taliban forces were shutting down girls' schools across the region. In 2009, Malala began blogging for the BBC about her life and education, using the pen name "Gul Makai." Her identity was soon revealed, however.

In 2011, Malala was the recipient of Pakistan's National Youth Peace Prize, and was nominated for the International Children's Peace Prize. The teenage activist and writer drew the attention of the Taliban, who issued a formal threat on her life. Malala continued to attend school. No one believed the Taliban would kill a child.

On October 9, 2012, Malala was riding the bus home from school when an assassin boarded the vehicle and shot her in the head. She required extensive medical treatment, including transport to Peshawar and the U.K., but Malala survived. In 2013, she resumed her education in Birmingham, U.K.

Since the attempt on her life, Malala has spoken before the U.N., written an autobiography, and won both the Sakharov Prize for Freedom of Thought and the Nobel Peace Prize. She devotes her time to studying and raising awareness for the plight of young women's education throughout the world.

In honor of this inspiring young woman, here are 12 fantastic quotes from her 2013 book, I Am Malala.

1. "Life isn't just about taking in oxygen and giving out carbon dioxide."

2. "Our men think earning money and ordering around others is where power lies. They don't think power is in the hands of the woman who takes care of everyone all day long, and gives birth to their children."

3. "We liked to be known as the clever girls. When we decorated our hands with henna for holidays and weddings, we drew calculus and chemical formulae instead of flowers and butterflies."

4. "When the whole world is silent, even one voice becomes powerful."

5. "In Pakistan when women say they want independence, people think this means we don’t want to obey our fathers, brothers or husbands. But it does not mean that. It means we want to make decisions for ourselves. We want to be free to go to school or to go to work. Nowhere is it written in the Quran that a woman should be dependent on a man. The word has not come down from the heavens to tell us that every woman should listen to a man."

6. "There are two powers in the world; one is the sword and the other is the pen. There is a third power stronger than both, that of women."

7. "I think everyone makes a mistake at least once in their life. The important thing is what you learn from it."

8. "Education had been a great gift for [my father]. He believed that lack of education was the root of all of Pakistan's problems. Ignorance allowed politicians to fool people and bad administrators to be re-elected. He believed schooling should be available for all, rich and poor, boys and girls. The school that my father dreamed of would have desks and a library, computers, bright posters on the walls and, most important, washrooms."

9. "We Pashtuns love shoes but don't love the cobbler; we love our scarves and blankets but do not respect the weaver. Manual workers made a great contribution to our society but received no recognition, and this is the reason so many of them joined the Taliban — to finally achieve status and power."

10. "If people volunteered in the same way to construct schools or roads or even clear the river of plastic wrappers, by God, Pakistan would become a paradise within a year."

11. "When the whole world is silent, even one voice becomes powerful."

12. "If one man can destroy everything, why can't one girl change it?"