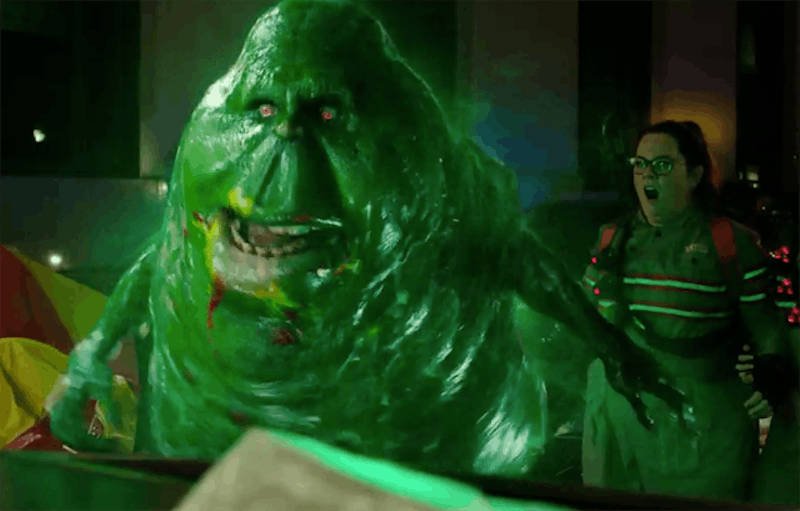 As the new Ghostbusters reboot rolls into theaters, viewers are reminded of everything they loved about the 1984 comedy: the music, the supernatural apparitions, and, of course, the ectoplasm. The ghostly green goo was a memorable aspect of the original movie, and thankfully, it makes an appearance in the 2016 reboot as well. If you're in the mood to celebrate the release of the new Ghostbusters on July 15, you might want to consider making some of that famous green stuff of your own. Thankfully, the internet has plenty of recipes for how to make Ghostbusters ' green slime.

Before you start this project, you should know exactly what you're getting yourself into. Bustle's own Kelsea Stahler had the chance to feel the slime used in the movies when she visited the Ghostbusters set last year, and reported that it can best be described as "a jar full of perfectly manufactured synthetic snot." So if you have a weak stomach, this DIY recipe may not be your jam. However, while the production used a messy corn syrup/glycerine mix to create their slime, the at-home version can be done using simple household products and can be easily contained to a small area. Check out Bustle's video tutorial below on how to make green slime, or simply follow the written recipe directions below.

1. Pour 1/2 cup water into one of the mason jars. Add in individual drops of food coloring until the liquid is your desired shade of green.

2. Add in 1/2 cup Elmer's glue and stir until thoroughly mixed.

3. Pour 1/2 cup water into the other mason jar. Then, slowly stir in a small amount (1/4 tsp or so) of borax at a time. Make sure that the borax is totally dissolved into the water before you add in more. The more borax, the thicker the slime will ultimately be.

5. Voila! Your slime is complete.

If the slime doesn't come out to be the texture you wanted, you can adjust the amount of borax to achieve a runnier or thicker slime. Then you can, uh, do whatever it is you were planning to do with it... just keep away from your mouth, white furniture, and any friends who don't share your love for slimy, Ghostbusters-esque substances.