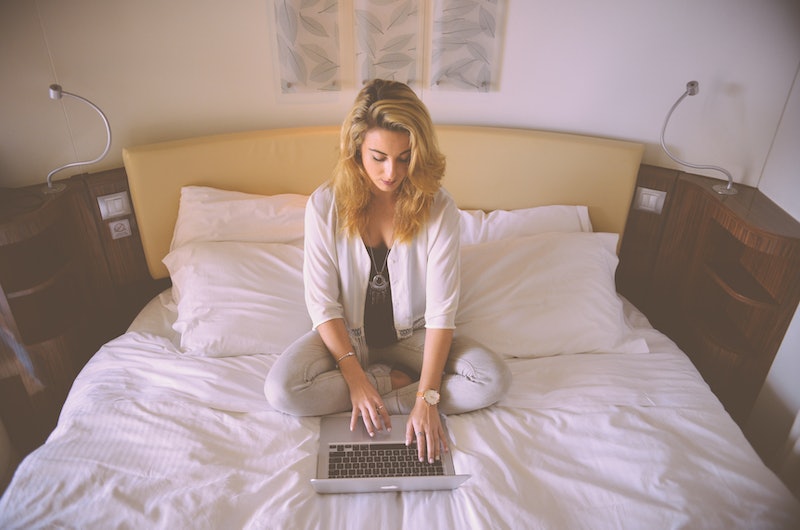 ADHD is a term almost all of us have heard, but many may not know exactly what it means. You may have even wondered if you have it yourself at one time or another, and the fact of the matter is knowing if you have ADHD is a pretty important question to answer, since it can impact so many parts of your life.

According to ADHD expert Melissa Orlov in a piece for Psychology Today, the ADHD brain differs both chemically and physically from the non-ADHD brain. She noted that because people with ADHD are as likely to be charming, funny, and intelligent as anyone else, it can be hard to fully recognize the problem at first, meaning a lot of people walk around undiagnosed.

The problem with this, Orolov noted, is that this means a lot of adults with ADHD just think there's something wrong with them, and often get accused of being lazy, or bad listeners when really they're doing the best they can. This can lead to low self-esteem and feelings of compete self-doubt in a person who is actually extremely talented and intelligent.

If you've ever wondered if you potentially have ADHD, here are 11 signs you may be right, and more importantly, here's what you can do about it.

1. You're Easily Distracted By Sounds

Do you need absolute quiet to focus? Can you absolutely not concentrate when the TV is on in the background? According to a diagnostic piece for Psychology Today, being easily distracted by auditory (and visual) stimulus can be sign of ADHD. If this seems to happen to you more than the average person, you may want to take this into consideration.

2. You Make A Lot Of Careless Errors

The same diagnostic piece also noted that people with ADHD often make a lot of careless errors. Are you the person who always needs others to proof read important emails? Do bosses and supervisors often reprimanded you for not paying attention to details? ADHD could be behind it.

In another Psychology Today piece, Scott Shapiro, MD, noted that people with ADHD often complain of feeling like they're in a haze. If you easily zone out it might be more than a mere penchant for day dreaming.

Dr. Shapiro also sited having a messy home or office as a tell tale sign of the disorder. However, it's also important to note that a lot of people have trouble keeping their spaces organized, so this is definitely important to consider in conjunction with other symptoms.

5. You Feel Like You Think Faster Than You Can Act

Orlov also noted that a lot of her patients say that having adult ADHD can feel, "Like having a race car brain with bicycle brakes." If this sounds familiar, and you often feel like your mind is racing with more ideas than you can actually carry out, this might be the reason why.

6. You Have Trouble With Relationships

According to Colette de Marneffe, PhD, a clinical psychologist in Silver Spring, MD, people with ADHD are often more likely to have relationship problems and get easily bored once the newness of their partner has worn off. "When the relationship becomes more stable and predictable, conflicts tend to emerge," she wrote.

7. You're A Master Procrastinator

In that same Health.com piece, Martin W. Wetzel, MD, an assistant professor of psychiatry at the University of Nebraska, said. "I can't tell you how many times a patient has told me, ‘I'm the king of procrastination,' or ‘I'm the queen of procrastination,' because they feel like no one else can put things off like they can." And this make sense, Wetzel said, because people with ADHD often can't really focus until the pressure is immense.

Dr. Wetzel also noted that people with ADHD are often not mentally present in the moment, meaning they often lose things and have no idea where they put them. He described it as being in an "underpowered state of consciousness."

9. You Have Lots Of Projects, But Few Finished Ones

ADDitude Magazine, a publication all about strategies for coping with ADD and other learning disabilities, stressed the fact that people with the disorder often have a ton of ongoing projects, but few that are ever finished. If you're easily bored by a current project, and then overwhelming excited by the prospect of a new one, this could be why.

10. You Tend To Overdo Things

ADDitude also noted that if you have ADHD you likely tend to overdo things, whether it be compulsive shopping, overeating, or overworking. If this is always something you've struggled with, and you also exhibit a variety of the other symptoms, it could be because you have the disorder.

11. You've Always Been This Way

And finally, all of the experts out there — including those mentioned above — noted that a key component to diagnosis is that most of your symptoms have been with you since childhood. If you have always been an incredibly organized, detail-oriented, and present person, and suddenly you're not, it's likely something else is going on.

OK, you've gone through this list and are thinking, "Oh my God. This sounds exactly like me. Now what?" The good news is there are a ton of options out there, the most important of which is scheduling an appointment with a trained professional to give you an official diagnosis. According to Psyche Central, there is no one test a health care professional can give you to accurately diagnose you with ADHD, but instead they will take a look at your issues and behavior as a whole and see if you fit the description for an diagnosis. Treatment specific to your needs will stem from there.

So if you've been feeling like you've been living with undiagnosed ADHD, know that there are a ton of resources and treatment options out there, and that recognizing you may have an issue is one of the absolute most important steps to regaining control. And if you need help locating an expert, try Wellness.com or ZocDoc.com to locate one in your area.