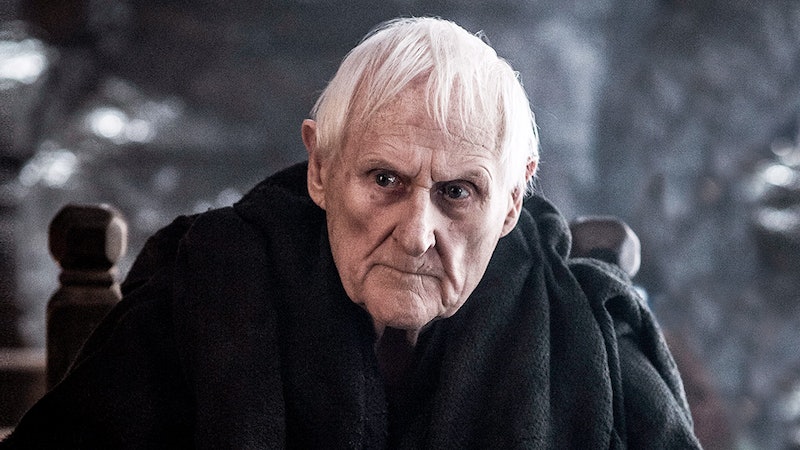 For the longest time, fans believed in one mathematic equation that explained the parentage of Jon Snow: R+L=J. The theory claimed that Rhaegar Targaryen and Lyanna Stark conceived a child together, and that wee babe was Jon. At the end of Season 6, when this parenthood was confirmed via one of Bran's vision quests at the Tower of Joy, it felt like all of fandom was going to run out of their homes into the street and do one big "I told you so" dance electric-slide style. But it turns out somebody else might have known, and the fact he didn't tell us is confusing and low-key infuriating. Redditor sakhnini1 theorized that Maester Aemon knew about Jon Snow's parents, but didn't tell his great-great-nephew... for some reason. What the heck Maester Aemon? We trusted you.

The theory comes from all those times Maester Aemon (née Targaryen) got his Yoda on and gifted Jon with a dose of his age-old wisdom. The first time happens in Season 1, when Ned Stark gets Joffrey's version of the royal treatment and Snow is all set to ride to King's Landing to avenge his alleged father. But Maester Aemon explains to Jon what happens when one renounces their duty,

"Love is the death of duty. If the day should ever come when your lord father was forced to choose between honor on the one hand and those he loves on the other, what would he do?... What is honor compared to a woman's love? And what is duty against the feel of a newborn son in your arms? Or a brother's smile?"

During this talk, Aemon reveals that he is a Targaryen, and we assume he's talking about himself and the things he's missed out on by joining the Watch: woman's love, a newborn son, smiling brothers, helping his family out when they were desperately in need. But all of these things also apply to Ned Stark's decision to take in Jon Snow: it's dishonorable to father a bastard, but he pretended to protect his sister, "a woman's love" could be Lyanna's love, "the feel of a newborn son" could be the feel of Lyanna's son in Ned's arms, and "a brother's smile" could be the brotherhood bond of the Stark family.

It wouldn't be the only time Aemon's pep talks turned semi-prophetic. Right before Jon makes the decision to rescue the Wildlings — which would inevitably lead to his death — he went to Aemon, who says to him, "kill the boy, Jon Snow, and let the man be born." Uh, so Aemon basically prophesied Snow's death and resurrection? Pretty impressive, and he didn't even need the Lord of Light's help to do it.

What if the reason Aemon was so down with helping out Jon Snow wasn't simply because he saw greatness in the bastard but because he knew the exact reason behind why he was a bastard? It makes sense that Rhaegar would send messages to his trustworthy uncle on the Wall about a baby, because he probably needed some advice as well (should we try sleep training, what's your favorite type of swaddle) — like father, like son.

But why wouldn't Aemon have told Jon Snow the truth of his parentage if he knew it? He was a pretty wise dude so one has to assume he had his reasons. I'm thinking he felt that Snow's parentage was something the man had to figure out himself (though how he would do so, if both Ned and Lyanna Stark are dead, I am not sure). Maester Aemon had been trying to keep Jon at the Wall as a Brother the whole time, and, chances are, if Jon knew he was a Targaryen, he would vacate the premises immediately and test out his fire power.

Secrets in Westeros rarely stay secret for long, so we can assume Aemon knew that someday Jon would figure it out. But he was probably hopeful that Jon would be able to handle the truth. I'm not so sure Snow would have been able to deal around Season 1 or even Season 5. But now that Jon's died and been born again, he's more than ready for some Maury-esque birthright information.

We may never know if Maester Aemon knew what was up with R+L=J (let's not even get started on A+J=T). What we do know is that Bran knows now, so it's only a matter of time before Jon Snow is clued in. What an interesting family reunion it shall be.