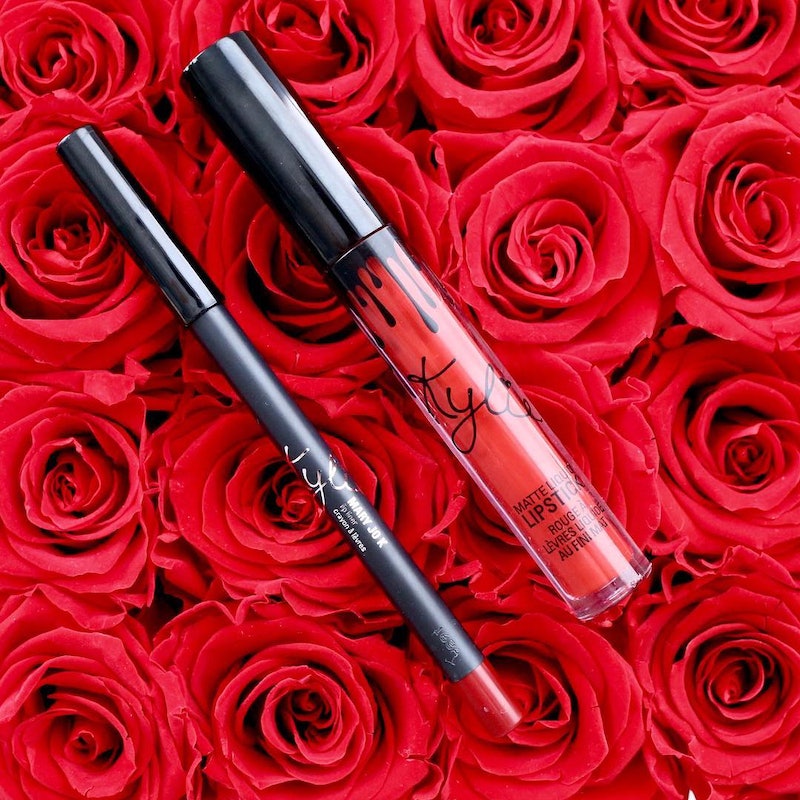 Ever wonder how Kylie Jenner comes up with the names for her lip kits? On Tuesday, she shared the inspiration for her Kylie Cosmetics first "true red" liquid lipstick and lipliner, "Mary Jo K." For anyone familiar with Keeping Up With The Kardashians, the origin of the name "Mary Jo K" is fairly obvious: Mary Jo is Kylie's (and all of the Kardashian/Jenner girl's) grandmother.

Mary Jo's favorite color is red, and when Jenner wanted to launch a true red lipstick for Valentine's Day, she immediately knew she wanted to name it after her "MJ." After all, the woman who birthed Kris Jenner, and by transitive property the entire Kardashian Empire, definitely deserves her own lip kit shade.

Jenner wanted to surprise her grandmother when the shade launched, but Kris (in true Kris fashion) prematurely shared the news. "My mom ruined it for me!" Kylie said on her app. "I went down to San Diego to surprise her and deliver a lip kit to her, and she was like 'your mom called me and told me." (Typical Kris.)

This isn't the first time Jenner has named a color after a family member: There's "Kourt K" and "Koko K" matte glosses, named after her sisters Kourtney and Khloe, and the "Reign" metal matte, which is named after her nephew.

According to Jenner's app, Mary Jo wears her namesake lipstick all the time, though she's not the only one who's a fan. Check out these other celebs who have also rocked Kylie's fierce red lip kit in "Mary Jo K."

Between the red lips and loose, natural hair, this might be Olivia Munn's best look yet.

She is beautiful, in every single way — especially in Mary Jo K.

According to Kylie's app, Mary Jo K is Jordyn's favorite lip kit shade (and I imagine as Kylie's BFF, she's gotten to test them all!!

Chrisspy seriously knows makeup, and gave Mary Jo K a glowing review on her YouTube channel. With over 1.5 million followers, I would say she's trustworthy.

At one point, I'm sure this was her "favorite" lip kit color (is it just me, or does she say that every time a new one launches?), and I have to admit it looks fierce on her. Like grandmother like granddaughter!

The Mary Jo K liquid lipstick is currently sold out, but will be available on KylieCosmetics.com after the next restock. The lipliner, however, is on sale now.