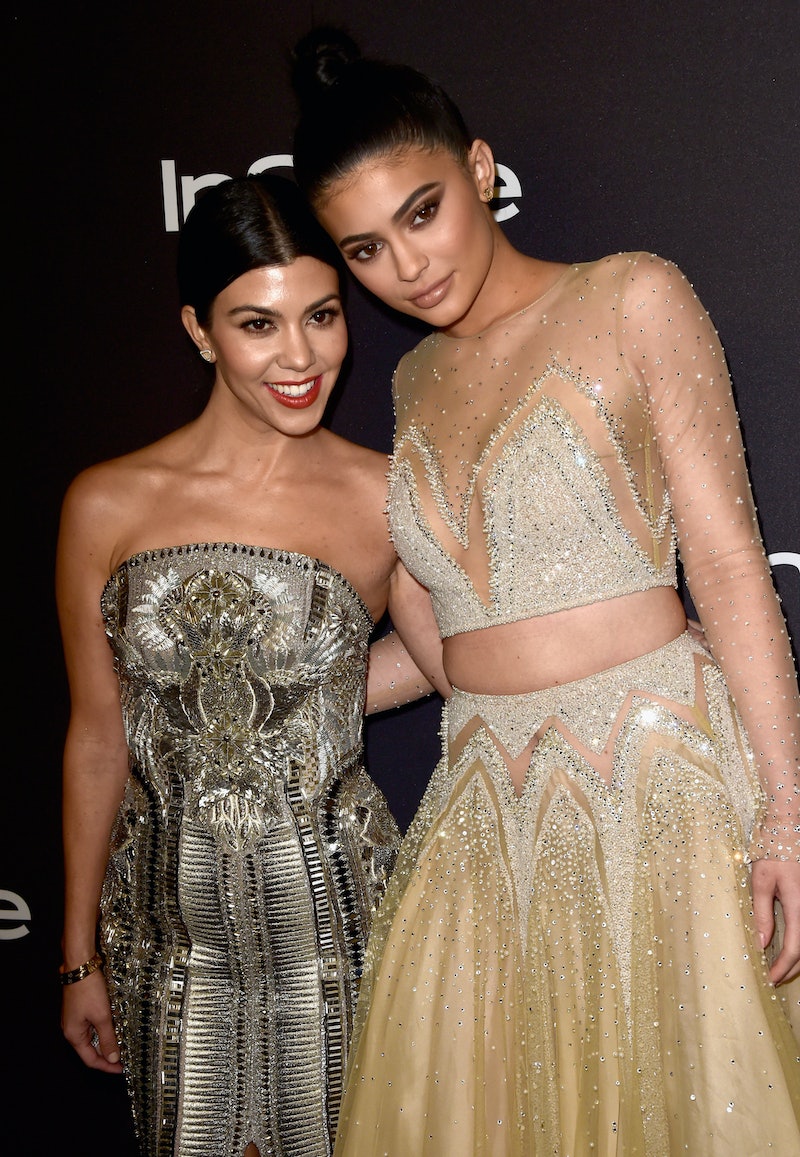 Grandma Mary Jo had the ripe red Lip Kit named after her. Khloe Kardashian inspired the moniker of the pale pink Koko K Lip Kit. All of the Kylie Lip Kit names have deeper meaning. Now, the Kourt K Kylie Lip Kit is named after her eldest sister Kourtney Kardashian. While some fans of the family might be wondering if her mother Kris Jenner or other sisters Kim Kardashian and Kendall Jenner are pissed that Lip Kits haven't been "khristened" with their names yet, let's pause for a minute and consider why Jenner may have opted to name her deep, rich purple Lip Kit, which has yet to go on sale, after her biggest big sis.

First, Kourtney and Kylie are the book ends in the family. That is, they are the oldest and youngest of Kris Jenner's children. So there is a bit of a special bond there pertaining to their birth order.

Also, while Kylie and Kim are often twinning, "Kourtlie" has been a thing many times, where the mother-of-two has actually been inspired by her littlest sister.

Additionally, Kim has her nude lip thing going on, where a glossy, pink-toned shade is her signature. Charlotte Tilbury even named a shade in her upcoming Hot Lips lipsticks collection after Kim K.W. Meanwhile, Kendall is the face of The Estee Edit and Estee Lauder and super defined, ultra matte lips aren't really her thing.

Naming the newest Lip Kit, which is a really gothic, "notice me" shade, after Kourtney Kardashian is a sweet gesture. You would expect Kim and and Kendall to be the first of the sisters to get KLKs named after them.

But Kourt, who admitted she wasn't quick to jump on the Lip Kit bandwagon but was glad when she finally got around to it, doesn't get nearly the same amount of media coverage as the rest of the sisters, Still, she seems like a pretty awesome mom and person. She's also flat out stunning and while she often relies on a nude lip, there is something just so breathtaking about her pout when it's deeply and darkly painted and oh-so-gothic.

Blown away is the only reaction you can have to Kourt's beauty in this pic. Perhaps naming the Kourt K Lip Kit after her biggest sis was Jenner's way of showing the world just how beautiful and special she is. It could also be her way of demonstrating that Kourtney Kardashian may be totally different than her public persona. Everyone has a dark side... even if it's only pertaining to lipstick and beauty products. Or maybe Kylie is encourage her sisters to step out of their makeup comfort zones with her products.

So many possibilities and theories, right?

If you are already jonesing for Kourt K to go on sale, you can bide your time with these purple Kourt K Lip Kit alternatives.