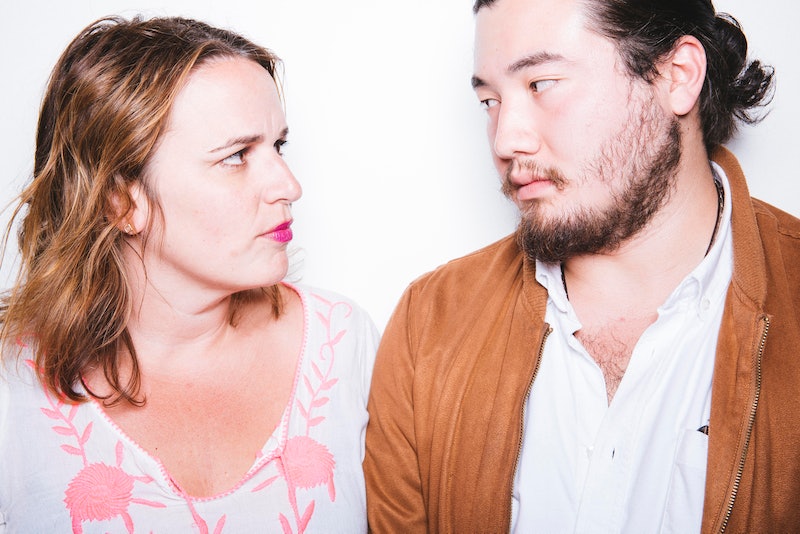 I've been cheated on and, to put it lightly, it sucks. (If you're reading this, ex-partner, then yes, you're still an utter a**hole.) But it turns out that having a partner cheat on you impacts more than just our feelings; it has both short and long-term consequences for our brain chemistry — impacting everything from the type of initial pain we experience, to the way we evaluate future mates. Understanding the neurological impact of cheating on the brain may not help us recover — but it does make it clear that it's something with serious consequences for people whose partners commit infidelities. And that is further proof that your grief and questioning afterwards shouldn't be dismissed or downplayed. Never let anybody say it's "all in your head;" as it turns out, that's precisely where the real action is.

The interplay between emotional experiences and physical consequences is an increasing area of scientific interest. For centuries, we've looked at experiencing happiness, pain, and grief as somehow ethereal and separate from the bodily (and, in a lot of cases, therefore less "real" or "legit"). But we're gradually building a different map of emotions in the 21st century that integrates the two: as it turns out, being romantically rejected stimulates the release of specific hormonal chemicals, engages certain pain receptors, impacts addictive neural pathways and future reasoning — and that may only be skimming the surface.

An important note: this stuff doesn't apply to people who are non-monogamous — because these reactions aren't somehow connected to the act of being with someone besides your partner; they're tied to the emotional implications of infidelity in monogamous relationships. For the monogamous person, having a partner engage in an activity that you personally define as "cheating" generally means feeling rejection, betrayal and a diminishing of the relationship. For the non-monogamous person, the phenomenon of "compersion," or learning how to get pleasure from a lover's experience with somebody else, creates an atmosphere in which other relationships are celebrated rather than a cause for jealousy. Our brain's suffering and upset around infidelity stems from our value systems; change the value system, and the impact is different.

Here are five ways our brains react to a partner's infidelity. No, the urge to sell all their belongings at a tag sale while they're at work is not covered, so don't try to blame that one on your body chemistry.

This one isn't about infidelity specifically; rather, any kind of heartbreak can induce pain. It turns out that breakups, dumpings, and romantic betrayals are both emotionally and physically painful — because they activate the parts of our brains that react to physical discomfort.

The now-famous study that discovered this was conducted by the University of Michigan, and it was perhaps a bit cruel and unusual: the researchers looked at volunteers' brain scans as they experienced a mild physical burn, and then as they looked at pictures of recent exes. The result? The same parts of the brain — the secondary somatosensory cortex and the dorsal posterior insula — lit up in both instances. These areas are connected to the processing of pain sensations, and it appears that they're also part of our discomfort at "social exclusion" or "rejection," whether by friends or by a partner. For monogamous people, infidelity is a rejection of our core value as a partner, and that's why it hurts like hell.

2. Our Gender Influences Our Reaction To Infidelities

It turns out that our physical responses to infidelity in relationships are mediated by gender, but we're still figuring out exactly why that is. A 2009 study of 130 people in Toronto was designed to prove a hypothesis: the researchers thought men would feel guiltier about engaging in emotional cheating, and women would feel guiltier about sexual infidelity. Unfortunately for them, the results were exactly the other way around: men, it turned out, felt far more remorse and misery about their sexual infidelity, while women were more upset by emotional cheating, regardless of sexual contact.

But does that change when you're cheated on, as opposed to being the one doing the cheating? A 2015 study decided to go all out and test a whopping 64,000 Americans between 18 and 65, of all sexual orientations, about how they'd feel if a partner cheated, emotionally or sexually. The results, as it turned out, were similar to the Toronto study: 46 percent of straight men were upset about emotional infidelity, while 65 percent of heterosexual women were; and 54 percent of straight men were devastated by sexual infidelity, compared to 35 percent of straight women. And that was the interesting thing; none of the LGBT people tested experienced even close to the same gender gap in distress. Why? Some have theorized that the extreme straight male worry about sexual infidelity could be down the evolutionary theory that some researchers call "paternal anxiety" — the idea that human males have no real way to know whether a child is theirs until birth and so get rather distressed if anybody goes near their potential mate. But it's also likely to do with modern social roles.

Interestingly, when non-monogamous people were included in this equation, they demonstrated no gender differences at all. Jealousy still mattered, but it seemed to be massively mediated by communicating about it, which is a necessary part of any non-monogamous situation.

3. We May Feel As If We're Breaking An Addiction

When we're cheated on (as with other heartbreak scenarios), our brain reacts as if we've gone cold turkey on a substance to which we've developed an intense addiction. Love is, to the brain, as addictive as cocaine. As the University of California—Berkeley explains, the experience of love, particularly in its intense first stages, follows the same reward pathways in the brain as the rush of an addictive substance. People who are seriously in love show strong reactions in their caudate nucleus, which releases huge amounts of feel-good chemicals and motivates behaviors that attempt to get another "fix." If that fix is taken away, the body reacts in much the same way it would if you'd quit nicotine.

The interesting thing about infidelity is that it often hijacks these reward pathways for its own purposes. After years with a partner, we may no longer get that intense dopamine rush that we got from being around them in the early days. If we experience it with another person, it can kick our brains into addictive substance-seeking mode, urging us on to disregard everything else in search of our next "fix." Affairs themselves, it seems, are as addictive as the initial love dose.

4. We May Develop Ruminations And Obsessions

Women in particular, it seems, are likely to respond to affairs with a psychological practice called "rumination." Psychology Today defines it as "the tendency to repetitively think about the causes, situational factors, and consequences of one's negative emotional experience;" if something has made you feel bad, in other words, rumination is the thing that causes you to endlessly go over that feeling in your mind. (The same word is used for the practice of cows bringing up digested material from their rumen, or stomach, to chew over again, which feels pretty appropriate)

Part of the reason we tend to ruminate is the addictive nature of love and our response to its betrayal or removal. A study of the brains of 15 adults conducted at the Albert Einstein College of Medicine found that people who were conflicted about a partner (they loved them, but had just broken up with them) exhibited activity in brain areas related to dopamine and addiction. The result showed "cravings," or an obsessive return to the same thoughts over and over; in the case of infidelity, obsessing over the betrayal isn't unusual in the slightest. (Unfortunately, a 2012 study found that a lot of rumination after infidelity significantly reduced the likelihood that the relationship would be salvaged.)

Women are, according to psychological studies, also more likely to ruminate than men; this may be because, as one 2000 study found, women in general are likely to feel more responsibility for the "emotional tone" of relationships and for any negative events that occur in them than men. In other words, we're culturally conditioned to believe it's at least partially our fault.

5. We Make Better Choices In Mates

There are very few bright sides to infidelity and betrayal in a relationship, but one emerged in a study released this April: it helps us learn about how we make our choices. The study asked 5,705 women in 96 countries about the consequences of a relationship dissolution in which a partner cheated and then left them for the "other woman." Six months to a year later, the women in this situation often reported a "silver lining": they had evolved their mate choice.

"Mate choice" is one of the fundamentals of life as a living organism; it's how we decide who to shack up with, and it covers everything from assessing their financial habits to noting their roving eye in a bar. And it turns out that the hard, hard lesson of living through a partner's infidelity actually improved the mate choice selection criteria of women, as they were now more capable of detecting signals in future mates of traits that might make them undesirable (i.e. cheaters). The researchers called this detecting "low mate value," and found that the women in the survey thought they'd refined this ability. So there you have it: being cheated on is miserable, but it's also educational.

More like this
12 Active Date Ideas That'll Get You & Your Boo Outside
By Lexi Inks
50 Valentine’s Day Instagram Captions To Post If You’re Single
By Jessica Booth, Lexi Inks and Carolyn Steber
18 Hinge Prompt Answers To Try If You’re Looking For Something Casual
By Lexi Inks
My Partner Wants Me To Wear A Diaper During Sex. Help!
By Sophia Benoit
Get Even More From Bustle — Sign Up For The Newsletter
From hair trends to relationship advice, our daily newsletter has everything you need to sound like a person who’s on TikTok, even if you aren’t.