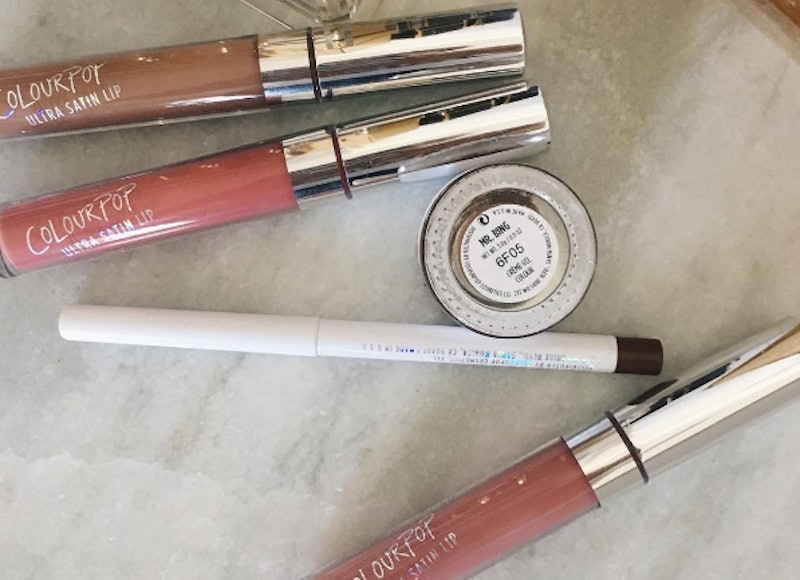 In case you missed it, YouTube vlogger Kathleen Fuentes collaborated with ColourPop Cosmetics on yet another set of fabulous products. The lip and eyeliner colors have already launched, but there's still time to get your hands on the collab. I'd head over there now though, because there's no telling how long they'll be around.

When a YouTuber has a fan base of over 2.3 million people, it only make sense that there's a lot of hype around everything she or he does. I was convinced that Fuentes' products would sell out just as fast as ColourPop's Ultra Metallic Lip, but I guess I was wrong. The makeup company looks to have stocked enough so that even the people who missed the news of the launch can get in on the fun. As of 9:30 am EST the day after the launch, all five products are still available to add to your cart.

According to Fuentes' YouTube video, the three lip colors and eyeliner set is designed to look great on all different skin tones. Although the color range is great, they only offer the colors in one formula — Ultra Satin Lip. That could be the reason that they didn't fly off the virtual shelves super fast.

Fuentes puts so much thought into every single ColourPop collab. From the names to the hues, the vlogger always makes sure it's up to her standards. She even decided not to sell one of the eyeliners because it wasn't pigmented enough for her. Just one look at the five new products, and you just know it's worth a buy. Especially because they're so darn affordable!

ColourPop clearly came prepared for this one. Because Fuentes has created products with the company before, I'm sure they were ready for the high demand. You can still purchase some of her other collections on the site as well.

The company also opened up international shipping on the same day as the launch. Even though the fan base was a bit wider, it's nice to see ColourPop coming through with the stock up.