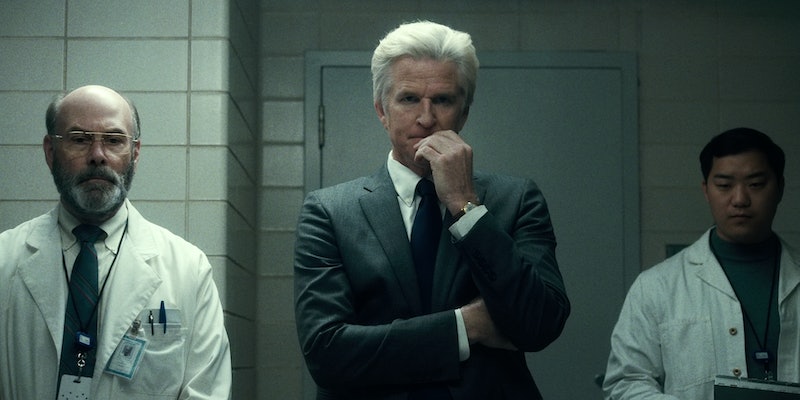 From Orange Is the New Black to Unbreakable Kimmy Schmidt, Netflix is constantly introducing unforgettable original shows that are just as addictive as they are entertaining, and its latest project, Stranger Things , which debuts in full on July 15, is sure to be no exception. Centering around the disappearance of a young boy, this series will delve into a world full of governmental experiments and supernatural mysteries that will leave you second guessing everything... that is if you aren't too busy hiding under the covers. Because according to a recent interview Bustle had with Matthew Modine, who plays scientist Dr. Martin Brenner, Stranger Things is definitely scary and will leave you on the edge of your seat from pretty much start to finish.

"I think it's pretty darn scary," Modine reveals, refusing to go into specifics for fear of giving too much away. "It's like Poltergeist. It's like Jaws... It's a little bit of all those things tossed into a blender with a dash of Winona Ryder, terrific young actors, and this strange doctor that I play." So, in other words, if you were planning on marathoning your way through the series all by your lonesome next week, you may want to rethink that scenario.

"I think it's the type of show you'd want to sit down and watch with a group of people," Modine says. And a recent Variety review of the show certainly backs up that claim, stating the "scares are joltingly effective." So unless you want to risk having a little trouble getting to sleep at night over the weekend, maybe invite a few friends over to help you tread through these dark and dangerous waters. Just think of them as your own personal fear buffer.

It's also worth noting that the end of Season 1 definitely leaves room open for a second season, so if you thought things would be wrapped up in a nice, neat package by Episode 8, think again because if all goes to plan, this mystery is only just getting started. "I hope there's a Season 2," Modine explains. "I'm enthusiastic because there's so much more that can be told... There's a lot more under the skin of this story than we're going to reveal to you in these first eight episodes." Your move, Netflix.

More like this
'Stranger Things' Finn Wolfhard Is “Proud” Of Noah Schnapp For Coming Out
By Sophie McEvoy
'Friends' Star Maggie Wheeler Offers Support To Matthew Perry After Reading His Memoir
By Alyssa Lapid
The Plane Crash In 'Dear Edward' Is Based On A 2010 Tragedy
By Grace Wehniainen
'That '90s Show' Is Officially Coming Back For Season 2
By Gretchen Smail and Grace Wehniainen
Get Even More From Bustle — Sign Up For The Newsletter
From hair trends to relationship advice, our daily newsletter has everything you need to sound like a person who’s on TikTok, even if you aren’t.